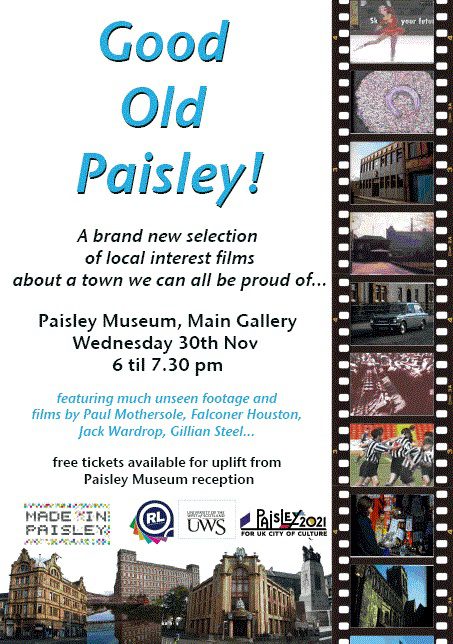 To mark St Andrews Day, a night of films that celebrate Paisley!  The main attraction will be the premiere of Paul Mothersole’s new film My Paisley.  The film is a heartwarming story of a schoolgirl’s discovery of the story of her hometown. It is accompanied by premiere’s of We Wore it Well by the Paisley Camcorder Club and Lochwinnoch ‘s Gillian Steel, a film about local fashion…as well as Family Album by  Claire McGinley.  The evening opens with the premiere of Dan Cattigan- Paisley’s Film Man – the story of the fun loving projectionist at Paisley’s La Scala cinema.  There is also a rare chance to see new and previously unseen footage as well as  Threadbare by Jack Wardrop and Falconer Houston’s 1960’s film Tannahill as a live 16mm projection..! All the films have been locally produced and show that Paisley’s film culture is ready for 2021!