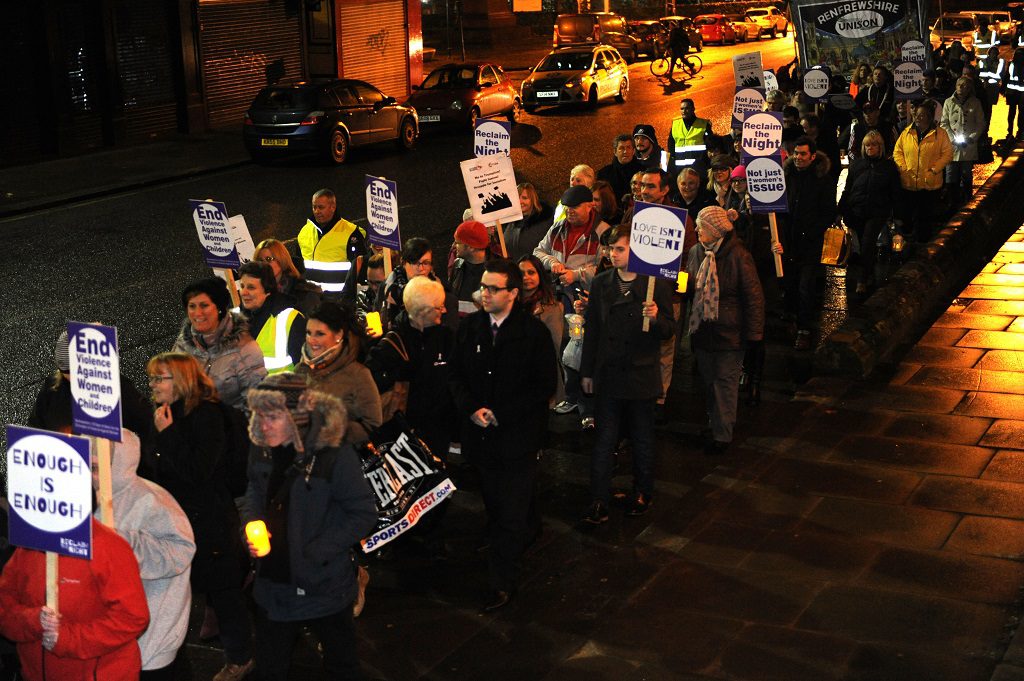 Hundreds of supporters descended on Paisley to join the Reclaim the Night march which forms part of the international 16 Days of Action campaign. Campaigners march to ‘Reclaim the Night’

The candle-lit march was organised by local women’s rights group Renfrewshire Rising and showed the communities support for a women’s right to be free of violence and abuse.

The march started outside the University of the West of Scotland and was led by Renfrewshire’s Provost Anne Hall and Tony Lawler- who generated a rousing atmosphere using the Charleston Drum.

Campaigners marched down Paisley High Street and into Dunn Square, where speeches were made in recognition of the cause and Provost Hall laid a remembrance wreath for those lost to domestic violence. The march continued to Paisley Abbey where there was a performance by the Renfrewshire Rising choir- led by Gordon Rigby, formally of the BBC and the Scottish Philharmonic Orchestra- before White Ribbon Scotland brought proceedings to a close.

The procession was part of the wider international 16 Days of Action campaign- which takes place from 25 November to 10 December this year and aims to raise awareness of the issue on a global level. The theme in Renfrewshire this year is ‘Not Just A Women’s Issue’ and men are encouraged to join the action and show their support by wearing a white ribbon during the 16 days..

Provost Hall said: “The 16 Days of Action campaign is vital as it brings the issue of domestic violence into the public eye and we must ensure people recognise that it is unacceptable.

“The campaigners put tremendous effort into ensuring awareness is raised about the issue and it was fantastic to see the number of people out to support the cause.

“I am proud to take part in the march and would encourage everyone to support the campaign in any way they can.”

Walk a Mile in Her Shoes will take place on Tuesday 6 December, 12pm for 12:30pm start, and will follow the same route as the Reclaim the Night march. You can find out more via www.renfrewshire.gov.uk/events.

This week in the Hoose
Scroll to top