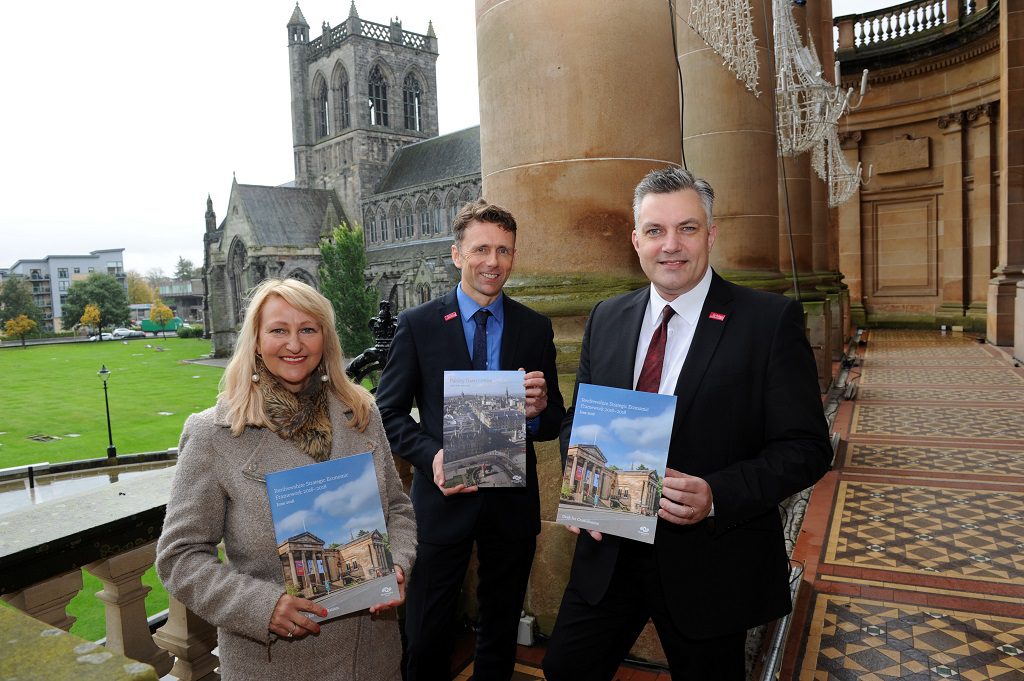 Local people and businesses are being encouraged to provide their views on a Renfrewshire Council strategy which sets out its plans for the economic regeneration of the region. Launched today (Monday 17 October), the Renfrewshire Economic Framework (REF) is accompanied by a consultation period, which will culminate with public events at Paisley Town Hall on Thursday 3 November and Wednesday 9 November.

The REF is a two year strategy which aims to take advantage of the region’s huge potential and significant role in the development and growth of the wider Glasgow City Region and Scottish economies, to build a better Renfrewshire for all.

The REF sets out a clear strategy for establishing the region as an attractive place to live, work and visit, emphasising that Renfrewshire is open for business. It contains 10 near term strategic priorities which will create more and better jobs through supporting growing businesses, attracting new investment and ensuring the foundations are in place to sustain that growth in the long term.

“However, we have the means to help overcome these challenges and are ambitious about how we can go about tackling poverty, raising attainment, and regenerating our town centres. We are committed to creating a fairer, more inclusive place where all our people, communities and businesses thrive.”

Linking with existing Council initiatives, including the £274m investment in Renfrewshire’s three City Deal projects and Paisley’s bid for UK City of Culture in 2021, the Economic Framework provides a clear sense of direction for achieving the creation of a stronger and more vibrant economy.

The Economic Framework’s 10 near term strategic priorities are:

Renfrewshire Council is also consulting on the Paisley Town Centre – 10 Year Action Plan, a component of the REF. This identifies four activity areas which will help to reinvigorate Paisley and create a Town Centre which works better for all of Renfrewshire.

Those four areas are the: Gilmour Street Gateway, High Street and UWS Campus, Abbey and River Precinct, Improving Connections (in to the Town Centre). It is intended that this will build on the success of the culture and heritage strategies to establish Paisley’s position and reputation as an innovative and exciting destination for local people, visitors and businesses.

The consultation period for both the REF and Paisley Town Centre Action Plan which began on Monday 17 October will culminate with a public engagement event at Paisley Town Hall, on Thursday 3 November (from 11.30am to 2.30pm) and Wednesday 9 November (from 5.30pm to 7.30pm). This will allow the public to hear first-hand about the proposals and their associated benefits, while also providing the opportunity to give feedback.

That feedback can also be provided by completing the Council’s short survey at:  www.renfrewshire.gov.uk/haveyoursay