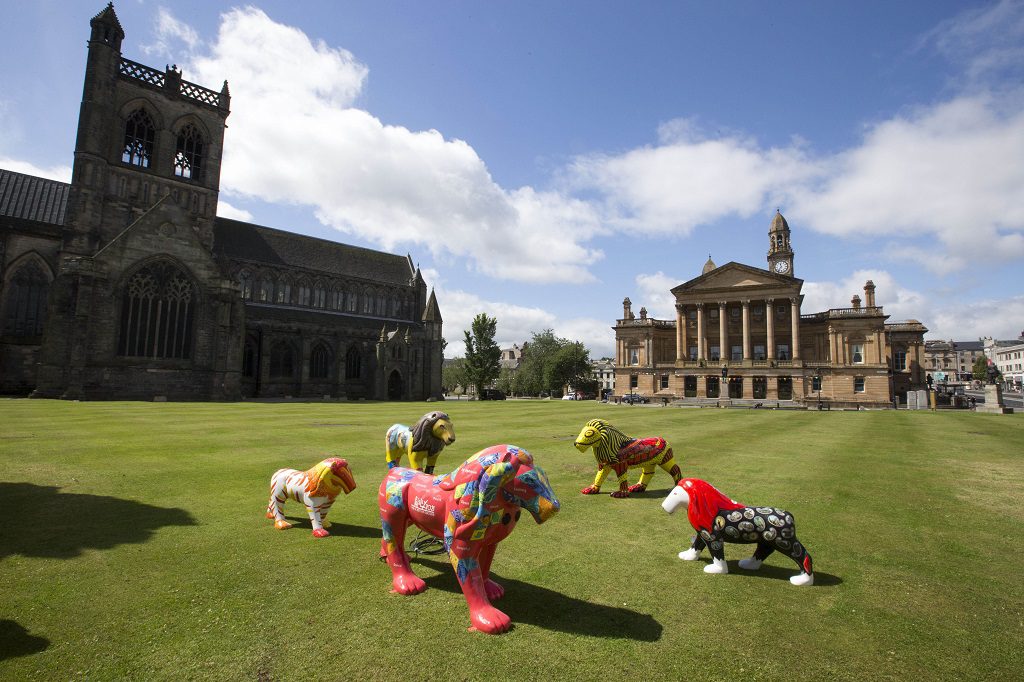 On Saturday, October 8, Paisley in Scotland will bid an official farewell to the ‘Pride of Paisley’, a lion-inspired public art trail (in homage to ‘Buddy’ the lion, a much loved exhibit at Paisley Museum and Art Gallery) that has been the largest in the town’s history. The aim of the project has been to raise awareness of Paisley’s cultural and heritage assets, and to encourage people from across Renfrewshire to reconnect with the streetscape, as part of the town’s culture-led, regeneration strategy. Culture-led regeneration is at the very heart of Paisley’s current bid to become UK City of Culture 2021. For three months, people were invited to follow the family-friendly trail of 25 colourful lion sculptures, painted by local artist and sponsored by local businesses, in locations across the town. Families came in their droves to see “the pride” and to create their own mini “buddies”, which took pride of place in local shops, cafes, restaurants and public buildings. The mini buddies have now been returned to the 63 schools in the region that created them.

The sculptures have been a source of great pride in Scotland’s largest town – which has suffered decline since its traditional textile industries collapsed, but is currently working towards a revival, which is gathering pace – and have been enjoyed and watched over by local people (affectionately know as “Paisley buddies”). It is further evidence for Paisley’s UK City of Culture bid that art and culture can play an enormous part in regenerating an area.

Hundreds of local people are expected to descend on the town’s Country Square tomorrow to see all 25 lions in one place, one final time.

“There has been a phenomenal public response to the lions, generating a real feel-good buzz as people have gone out to explore the town centre and learn more about things they had perhaps come to take for granted.”

The town has a schedule of exciting events and exhibitions over the next year and being home to PACE Theatre Company, which is one of the largest youth theatre companies in the UK with A-list alumni including Paolo Nutini and James McAvoy, Paisley is certainly one to watch.

The large lions sculptures will be auctioned off at an event on October 21 with all money raised going to St Vincent’s Hospice and Hospice Accord. The shortlist for the UK City of Culture 2021 will be announced in April 2017.