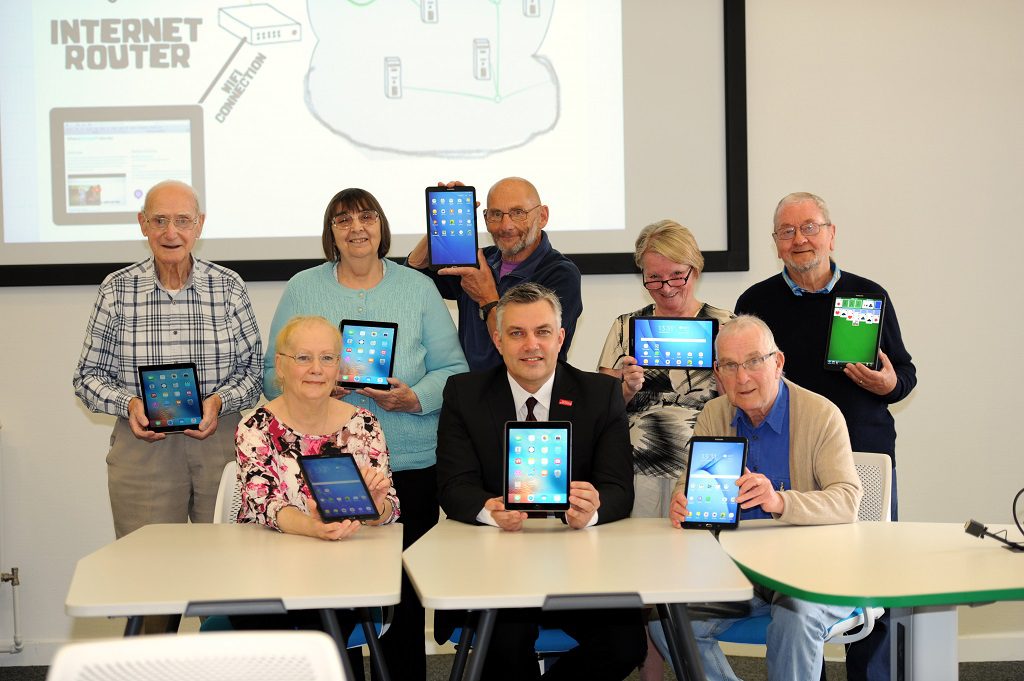 Renfrewshire Council is taking significant steps to close the digital divide with the launch of its Digital Renfrewshire Strategy. The Digital Renfrewshire Strategy sets out how the Council and its partners aim to tackle digital exclusion, improve digital public services and infrastructure, and use digital technology and skills to grow Renfrewshire’s economy.

It was launched this week (Tuesday 20 September) when Renfrewshire Council Leader Mark Macmillan joined older members of the local community at a digital participation class, designed to give people the basic skills needed to reap the benefits offered by the digital world. The class took place at University of the West of Scotland’s (UWS) Paisley Campus.

The class, organised by Renfrewshire Council’s new Digital Participation Officer in partnership with Roar: Connections for Life (formerly known as Reaching Older Adults in Renfrewshire), is supported by the Council as part of its Tackling Poverty programme. The newly launched strategy has been developed out of the Council’s Digital Participation Plan and seeks to raise awareness of the need to close the digital divide, with an estimated 26,000 people in Renfrewshire lacking basic digital skills.

Councillor Macmillan joined class members as they were introduced to the fundamentals of using tablets and the benefits which digital technology can bring to their daily lives. The weekly classes, which run for a six week period, take place at a range of locations including UWS and West End Community Centre.

The tablet classes for older people are just one of the initiatives taking place across the region as the Council looks to deliver its Digital Strategy. There will also be tablet classes for people with disabilities and coding clubs for young people, among many others.

Renfrewshire Council Leader Mark Macmillan said: “The internet is being increasingly used for things like keeping in touch with others, banking, shopping, accessing benefits and applying for jobs but not everyone has the skills or access they need.

“Increased digital participation can improve people’s quality of life, save them money and boost economic regeneration. Unfortunately, those most likely to be digitally excluded are already facing social inequality with people who are retired, unemployed, in poor health and less educationally qualified at greatest risk.

“The Digital Renfrewshire Strategy sets out our vision and action plan for ensuring everybody has the opportunity to reach their digital potential and maximise the wider economic, educational, health, social and cultural benefits for all.”

Paul Cameron, Digital Participation Officer, said: “There has been an enormous demand for these tablet courses. Many older people are aware of the great opportunities that the internet offers and tablets give them an affordable way of accessing the web, however a lot of older people lack the skills to get online. These practical courses help addresses that issue”

To help deliver its aims, Renfrewshire Council has committed £1m of investment in public wi-fi for Paisley, Johnstone and Renfrew town centres which will deliver significant benefits for communities and businesses in these areas.

The Council is also improving its digital public services through the introduction of its MyAccount online portal. This makes it easier and more convenient for people to make payments, apply for council tax benefit and student council tax exemption online, and further services will go live in the coming months.

Renfrewshire businesses will also benefit from the Council’s Digital Volunteer programme which provides a digital resource to local third-sector organisations and small businesses which otherwise would not have had access to it.

Professor Craig Mahoney, Principal and Vice-Chancellor of UWS, said: “UWS is proud of the contribution it makes to Renfrewshire and, in particular, its close relationship with Renfrewshire Council. We are delighted to be a venue for ROAR: Connections for Life classes and that the Council’s new digital strategy was officially launched at our Paisley Campus.

“Widening access and providing innovative learning opportunities are extremely important to UWS and we strongly advocate upskilling as many people as possible in the area.  We are therefore a keen supporter of the Council’s work to increase digital participation and open up digital technology to the entire community.”

To find out more about digital participation classes in your area, please visit the Digital Renfrewshire Facebook page: DigitalRenfrewshire or on Twitter: @Digi_ren

Renfrewshire Council also operates a Digital Directory which provides details of where local people can gain access to computers, wi-fi, and digital skills training at locations including libraries and Community Adult learning venues.

The Digital Directory can be found at:  www.renfrewshire.gov.uk/digital

Hard copies are also available at libraries and the Council’s Customer Service centre at Renfrewshire House.