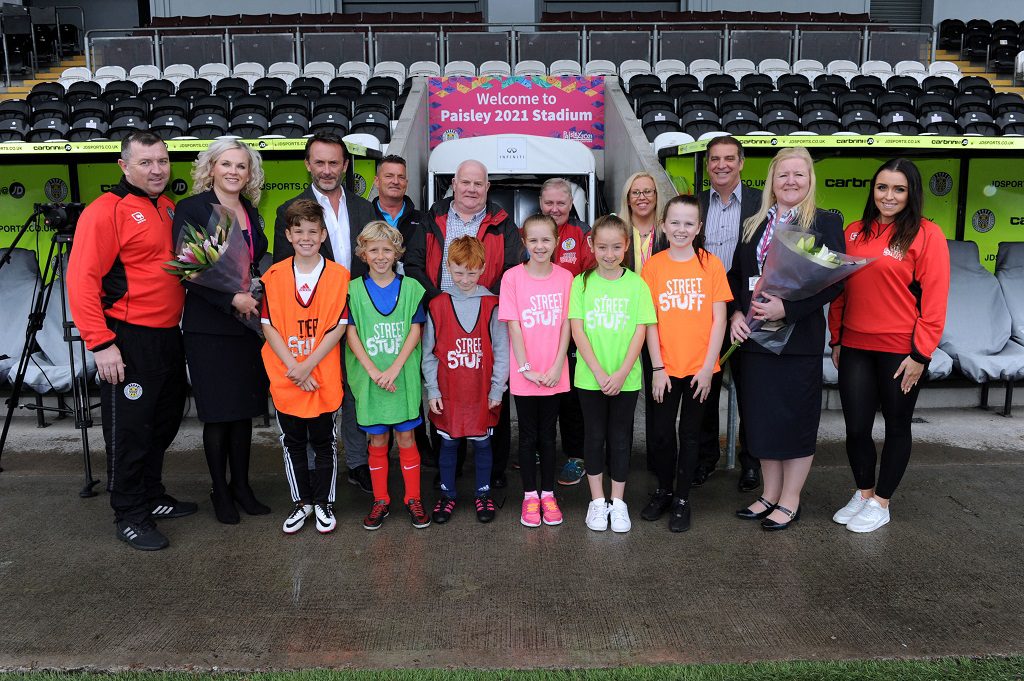 Renfrewshire’s award-winning Street Stuff youth diversionary scheme has marked the end of its summer season – after recording more than 10,000 attendances during the holidays. The popular programme runs year-round activities across the area including street football, dance and cheerleading classes, and a youth bus with video games, and has helped reduce crimes of youth disorder by 75% since it started in 2009. Street Stuff is run as a partnership between various bodies including Renfrewshire Council, St Mirren FC and Police Scotland.

And in addition to the normal timetable of early-evening activities, an extra programme of afternoon classes was run over the holiday period – including a free healthy meal for every child who attends.

The summer classes ran at six locations – the Paisley 2021 Stadium and Glenburn in Paisley, Bargarran in Erskine, Knockhill Park in Renfrew, Our Lady of Peace PS in Linwood and the McMaster Centre in Johnstone, with an estimated 170 kids a day.

The free meals and summer expansion was paid for by the council’s £6m Tackling Poverty Fund, which aims to help families and young people improve their prospects.

Councillor Eddie Devine, Renfrewshire Council’s Street Stuff champion, popped down to St Mirren to see some of the activities for himself, including football in the Airdome and dance classes in the new fan bar in the main stand.

While there, he helped present thank-you gifts to some of the catering staff who have worked hard all summer to co-ordinate the sizable operation to feed the kids.

He said: “The Street Stuff programme has been making a huge difference to Renfrewshire for seven years now – and it continues to go from strength to strength.

“The extra money from the council’s Tackling Poverty Fund saw the scheme expanded to new locations and times this summer – by providing a healthy meal for every child we are helping ease the financial strain on low-income families.

“At the same time we are encouraging active lifestyles in a way which is proven to help keep kids out of trouble.”

New St Mirren chairman Gordon Scott added: “It’s important to everybody at the club we be as involved in the Renfrewshire community as possible.

“Street Stuff is a wonderful example of major organisations from that community pulling together to make a big difference to people’s lives.

“In my short time as chairman it’s been very obvious St Mirren and Street Stuff work exceptionally well together. I hope to continue that and expand the great work it is doing.

“And it’s been brilliant to have the Street Stuff kids here over the summer – it’s a great use of the facilities we have at the stadium.”

Street Stuff runs at more than 20 locations throughout Renfrewshire, six evenings a week. You can see the full timetable at Renfrewshire.gov.uk/streetstuff