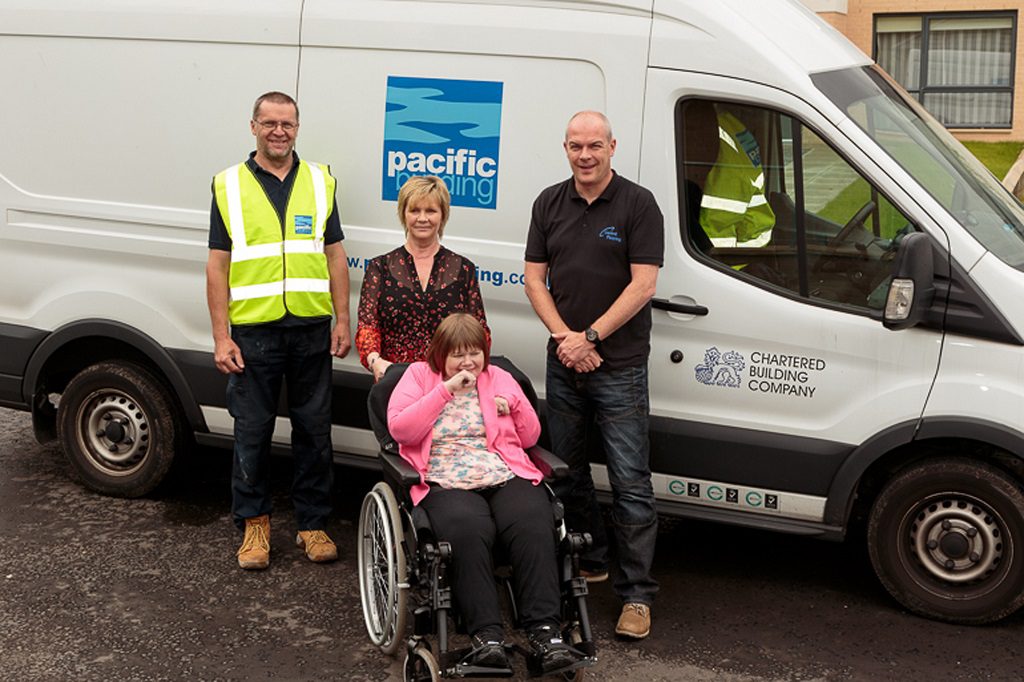 It was like an episode of the DIY SOS telly programme when mum Margaret Hamill needed major adaptations to her bathroom for her wheelchair-user daughter. She had mentioned her predicament to a colleague, who then contacted a friend who works at construction company, Pacific Building, in Hillington and just like Nick Knowles on the popular TV show, they immediately sprung into action to get the job done when they heard about the problem. Margaret Hamill and her daughter, Fiona with from left Mariusz Dluzniewski, from Pacific Building and Stephen Donaldson, from Central Flooring

Margaret and her 33-year-old daughter, Fiona, who suffers from cerebral palsy, had recently moved into a house in the south side of Paisley. But although there were modifications to allow wheelchair access, the bathroom wasn’t suitable for Fiona to have a shower without the floor being flooded and water having to be mopped up with towels.

But the big-hearted director of Pacific Building, Brian Gallacher quickly organised for the bathroom to be completely adapted, bringing in tradesmen to carry out the work that would normally cost thousands of pounds.

Pacific Building created an entirely new wetroom, with wetwall panels, larger shower tray, re-screeded and installed new flooring for the bathroom, so water runs into the drain instead of into the hallway as it used to.

Margaret, 61, who works as a respite organiser for Renfrewshire Carers Centre, said: “I’ve got a lovely house, but unfortunately the bathroom just wasn’t suitable for Fiona to use properly.
“I mentioned this to someone I work beside who knew someone at Pacific Building and it all just happened from that chance conversation. It was totally out the blue.
“I can’t thank the company enough and it was like something you’d see on the DIY SOS TV show with the tradesmen descending on my house to transform my bathroom.
“And just like on the TV show everyone was really nice while the work was going on.”
Margaret added: “Having the bathroom remodelled makes life a lot easier for Fiona. Life was very difficult when Fiona wanted to use the shower. Without this work being done we’d still be struggling to mop up water that was running out the bathroom.
“I can’t believe Pacific Building did all this work and Fiona and I have been very fortunate. It really does reinforce your faith in human nature that there are such kind people out there.”

The tradesmen who carried out the work were Stephen Donaldson, of Central Flooring; Brian Brannigan, of RM Plumbing and Mariusz Dluzniewski, who is a Pacific Building Joiner.

Pacific Building Managing Director Brian Gallacher said: “Pacific are proud to have a social conscience and we have an enviable track record of helping people in need – primarily in the local community.
“Margaret is an inspirational figure who deserves the home of her dreams for herself and her daughter.
“Pacific have been celebrating our 10th anniversary this past year and we marked the occasion by making 10 donations to local worthy causes. We were only too happy to extend that spirit of generosity further when we heard that Margaret was in a spot of difficulty.
“Needless to say, I am hugely grateful to Steven and Brian and to our very own Mariusz for giving of their time and expertise to carry out this project.”