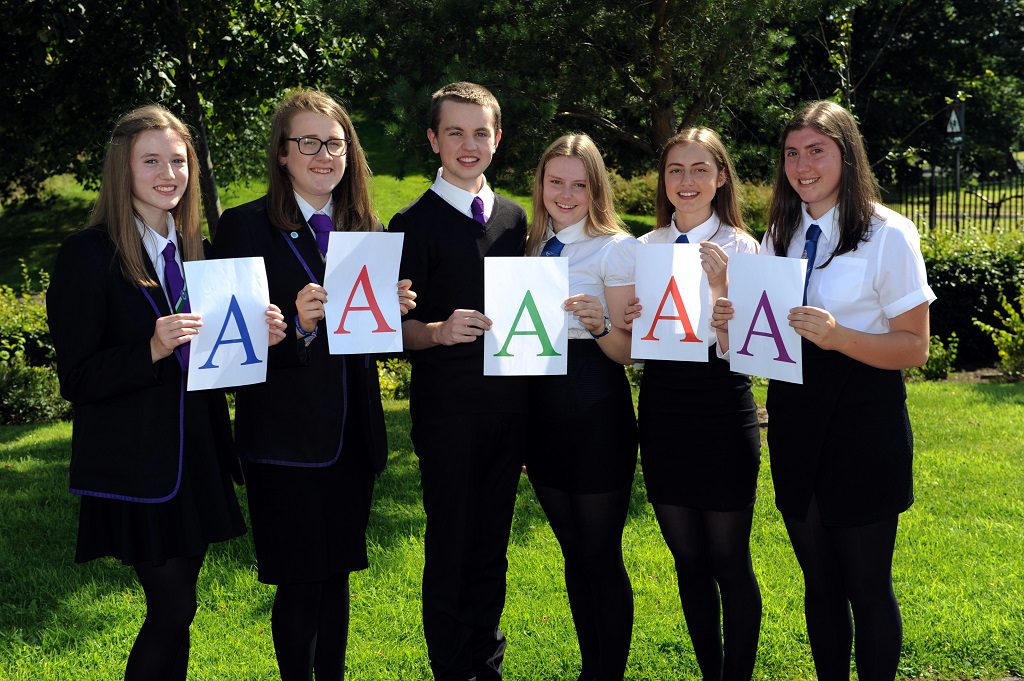 Renfrewshire’s pupils went back to school this week – and some of them were flying high after managing top marks in their Higher exams. Across the area, 48 pupils woke up to discover they had five A grades when the exam results were released last week, with one pupil even managing six As.

Every one of Renfrewshire’s eleven secondary schools had at least one pupil getting top marks.

And a small group of the five-A pupils who have just started sixth year met up at St Andrew’s Academy to relive the moment they realised what was inside the SQA results envelope.

Alice Murray, 17, was one of several Paisley Grammar pupils with top marks She said: “When I saw the results I was ecstatic and just relieved all the hard work had paid off – I really wasn’t expecting five As.

“Now I want to stay on for sixth year and do a few more subjects. I want to go to uni but I’m not 100% sure what I want to do yet so am keeping my options open.”

St Andrew’s Academy also had a number of pupils achieving top marks – including Christopher Adam, 17, whose five As included an Advanced Higher in Music.

The talented violin player said: “I am just over the moon. I am looking forward to sixth year now as it will be a bit less stressful, a lot of the hard work is done for now.

“I am hoping to study at the Royal Conservatoire in Glasgow next year and would love to maybe go on to play in an orchestra in future.”

And Renfrewshire education bosses have praised all pupils for delivering an encouraging set of results across the area.

Councillor Jacqueline Henry, Convenor of Renfrewshire Council’s Education and Children Policy Board, said: “It was great we had so many pupils achieving five As in this year’s Higher exams and it is nice to be able to highlight their individual achievements.

“But we are proud of all pupils in Renfrewshire and want to congratulate every one of them on their efforts and hard work. And for those who have now left school we wish them all the best for the future.

“We are ambitious for Renfrewshire’s schools and want the area to be recognised as one of Scotland’s top education authorities.

“The overall results this year were very encouraging and have shown substantial improvement on those of a few years ago, which we are delighted with.”