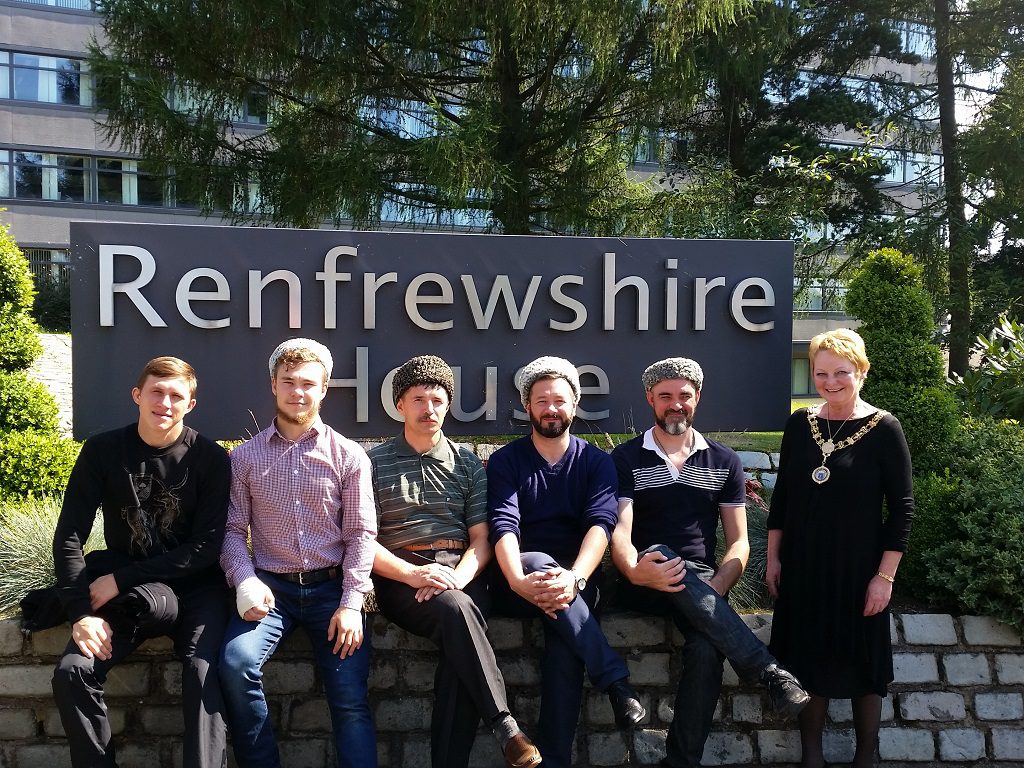 Renfrewshire’s Provost Anne Hall welcomed wrestlers from home and abroad to Paisley as part of a sporting cultural exchange. Wrestlers from Azov in Russia- as well as dignitaries from the region- were given a tour of the council chambers alongside their Scottish counterparts before receiving a civic reception to mark their visit.

Provost Hall was presented with a certificate of friendship to recognise the relationship which has been built up between the two countries through sport. The visit was the idea of local Paisley man Zane Gray, who has set up a social enterprise to promote traditional Scottish wrestling- a sport which has been on the edge of extinction.

His passion for reviving the ancient sport enabled him to forge close links with the Russian consul which in turn led to Zane and three fellow wrestlers visiting Russia to take part in the Cossack Martial Games- becoming the first foreign team to take part in the event.

The trip was so successful that the Azov wrestlers have made the return trip to Scotland and took part in the Highland Warrior Challenge at the World Pipe Band Championships last weekend.

It is hoped that a partnership can be formed to train children from deprived areas in Scotland and Russia who will go on to take part in these two events in the future.

The Azov wrestlers have further links to Scotland as the declaration of Arbroath cites the origin of the Scottish people as Scythia, which is today the Rostov-on-Don/Azov region.

Provost Hall said: “I was delighted to welcome the wrestlers from both Scotland and Russia to Paisley as part of their cultural exchange.

“Scottish wrestling has been around for centuries and it is important that we keep the tradition alive by encouraging our young people to become more active and become involved in sport.

“I hope that the relationship that has been developed continues and can lead to further cultural exchanges to the benefit of our young people- and to the sport of Scottish wrestling.”

If you are interested in getting involved then visit www.facebook.com/wrestlingscotland