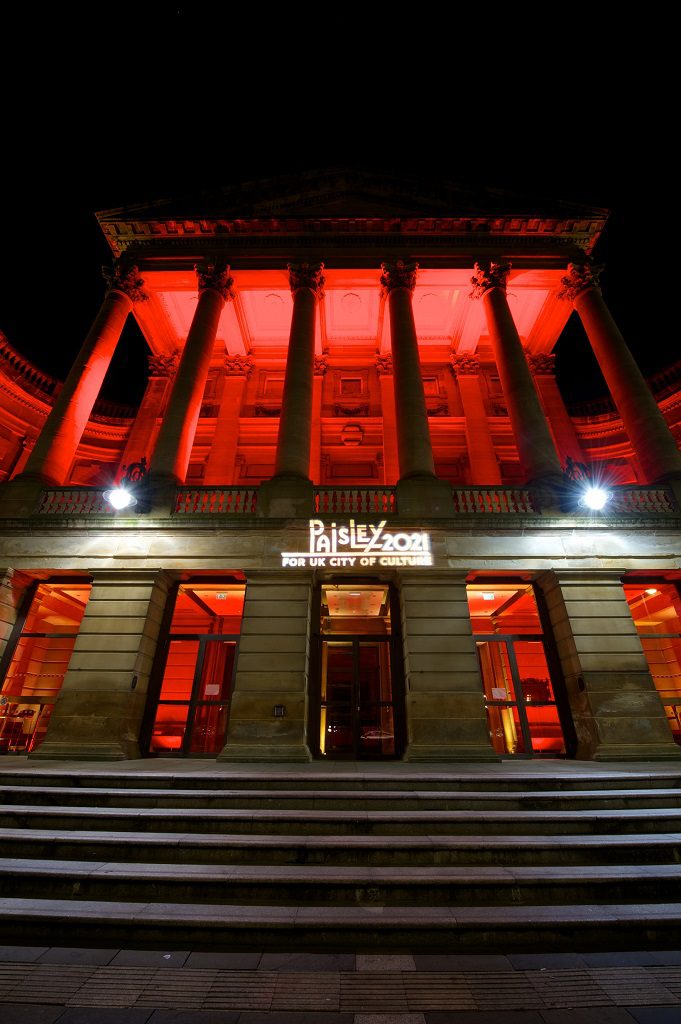 Local authorities across the West of Scotland have united in a strong show of support for Paisley’s bid to become UK City of Culture in 2021. The eight local authorities which form the Glasgow City Region joined in with two days of public demonstrations to show their support for the Paisley 2021 bid.

On Monday night, a number of iconic and landmark buildings across the West, lit up in Paisley 2021 colours. The dazzling show of support included The SSE Hydro, Hamilton Town House, Barrhead Foundry, Titan Crane, Beacon Arts Centre in Greenock and Paisley Town Hall.

The Paisley 2021 bid aims to show the breadth and depth of Renfrewshire’s cultural assets, value of its heritage and its potential for economic social and cultural regeneration.

Culture stimulates and reflects economic growth, social confidence and cohesion – objectives mirrored by the Glasgow City Region City Deal’s 26 projects which will be delivered across the three themes of; infrastructure, skills and employment, and innovation and business growth.

Their joint aim is to create a Scottish powerhouse seen as one of Europe’s leading destinations of choice for residents, businesses, visitors and investors. Paisley’s prominent bid to UK City of Culture in 2021 epitomises those strategic aims, as it celebrates its rich textiles heritage while looking forward to a future built on innovation, enterprise, talent and community.

Councillor Mark Macmillan, Leader of Renfrewshire Council, said: “We would like to thank our City Region partners for this significant show of support and their full backing of Paisley’s bid to become UK City of Culture in 2021. The City Deal will be transformational, changing not only the physical and social landscape but also how we, as partners, work together across the region.

“This commitment to support Paisley 2021 shows this is already happening and delivering benefits for all member authorities. Paisley’s name was once carried around the world by the Paisley Pattern and now, through the Paisley 2021 bid, we can again come to international prominence, helping to attract visitors and investment from around the globe to the West of Scotland.”

Councillor Frank McAveety, Leader of Glasgow City Council and Chair of the City Region Cabinet, said: “We are pleased to be supporting Paisley, our neighbour,  in its ambitious and innovative bid to become UK City of Culture in 2021.

“The UK City of Culture title will bring worldwide attention and a programme of high profile events, creating a wealth of economic benefits and international cultural connections across the West of Scotland region, including Glasgow.”

Councillor Martin Rooney, Leader of West Dunbartonshire Council, said: “As a Council we are dedicated to improving the wellbeing of our communities and improving economic growth. Delivering high-quality arts and cultural opportunities is key to achieving that.

“That’s why we are delighted to back Paisley’s bid to be UK City of Culture in 2021, which will showcase on a national scale the varied and exciting cultural opportunities and rich heritage that our area and its surroundings have to offer.”

Councillor Stephen McCabe, Leader of Inverclyde Council, said: “Paisley 2021 is an ambitious bid and I have no hesitation in supporting it. As our neighbour and city region partner, Renfrewshire Council should be congratulated on building a campaign which can only serve to remind people of the strong cultural connections in Paisley and in the wider city region area.

“I would encourage everyone in Inverclyde to back the bid and show your support for Paisley 2021.”

Councillor Jim Logue, Leader of North Lanarkshire Council, said: “We are fully behind Paisley’s bid to be UK City of Culture in 2021. The collaboration we have between the councils as part of the Glasgow City Region City Deal shows what can be achieved when we work together.

“Significant elements of culture are shared between Paisley and the towns and villages of North Lanarkshire. It’s also important to understand that culture can stimulate the economy across the Glasgow City Region and that is good for everyone.

“I wish Paisley every success and have no doubt at all that the bid will be an outstanding one.”

Councillor Rhondda Geekie, Leader of East Dunbartonshire Council, said: “We’re delighted to support our City Deal partners, Renfrewshire Council in their Paisley 2021 bid to become UK City of Culture and wish them every success.  Celebrating culture is a key stimulus for growth and Paisley 2021 is entirely in keeping with our wider aspirations and plans across the Glasgow City Region.”

Councillor Jim Fletcher, Leader of East Renfrewshire Council, said: “We wish Paisley all the very best in its bid to become UK City of Culture in 2021. Partnership working is clearly the watchword for all stakeholders in the Glasgow City Region and whatever success Paisley enjoys would be a huge boost to neighbouring local authorities.

“I have been watching the media coverage of Paisley’s campaign with interest and truly believe that not only do they have a fantastic story to tell, but they have great people to tell it.”

There’s a run on tickets for Saints game!
Scroll to top
Go to mobile version