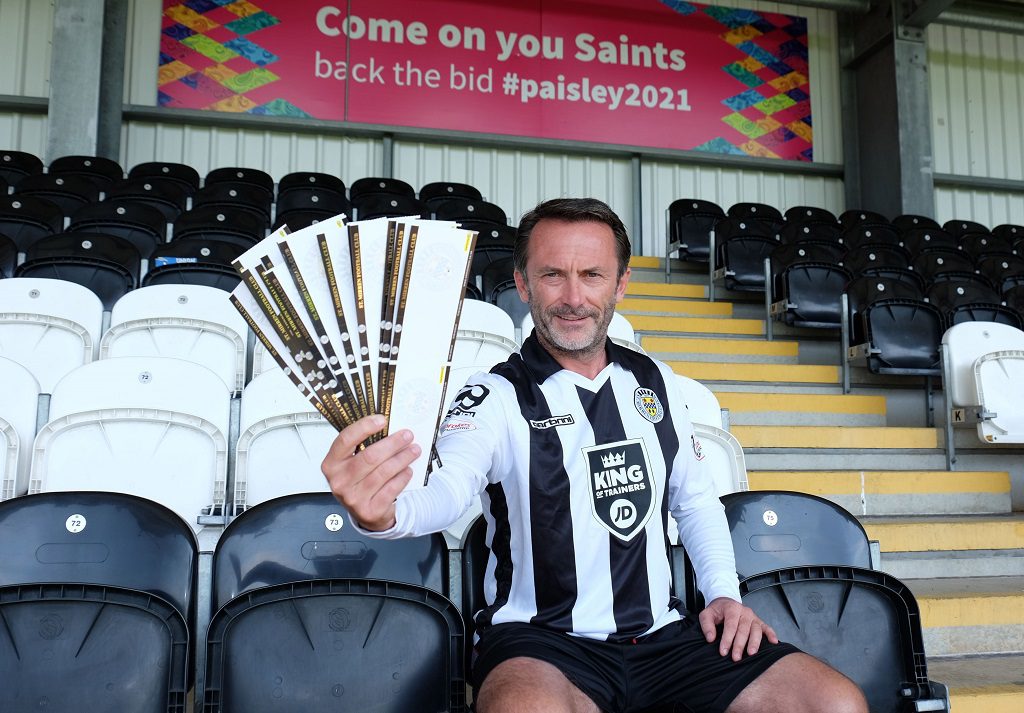 ST MIRREN chairman Gordon Scott has issued a challenge to everyone running in this weekend’s Paisley 10k Race. Anyone wearing a Saints top beats him across the finishing line, he’ll give them a free ticket to the Buddies home game against Queen of the South, on September 10.

And any youngster under the age of 17 wearing a St Mirren top who takes part in the Fun Run that follows the big race will also get free entry to the game.

Gordon, 52, is a keen runner and he’s taking part in his third Paisley 10k, on Sunday, August 21.
He says: “There you go, I’ve thrown down the gauntlet to all the runners in the Paisley 10k. Get the St Mirren tops on and let’s see if you can beat me in the big race.
“Anyone who runs the race with a Saints top on and who crosses the finishing line with a better time than me, I’ll give them a free ticket to see the Buddies take on Queen of the South.
“And as an incentive to all the kids taking part in the Fun Run, if they wear a Saints top during the race, they’ll get to see St Mirren for free as well.”

Gordon’s previous race times were 51 minutes, in 2012 and 47 minutes, in 2014. Now he’s on an intensive training schedule running five times a week, as he aims to beat his previous best time.
Gordon adds: “I’ve not had a lot of time this year to train for the race, but in the past few weeks I’ve really upped the amount of running I’m doing.
“I’m certainly aiming to beat the 50-minute finish, so people will have to go some to get their free ticket to see the Saints.
“We’re giving away the free tickets to show that St Mirren is a community club and we support big community events like this.”

Joyce McKellar, chief executive of Renfrewshire Leisure – who are organising the event – revealed they have almost beaten the previous record for runners in the Paisley 10k and Fun Run.
She said: “With just a week to go, 2,425 people have already signed up to take part and we’re on course to beat the previous record of 2500 entrants in 2014.
“The free tickets to see St Mirren is a great incentive for everyone who is already taking part and another reason for people to sign up for the race.”

Youngsters under 12 in the Fun Run who receive a free St Mirren ticket must be accompanied to the Queen of the South game by an adult.
Log on to www.saintmirren.net http://www.saintmirren.net/pages/ for details on how to register for this free ticket offer.

Glasgow News? Daily Updates part of our network
Landmarks across the West of Scotland light up for Paisley 2021