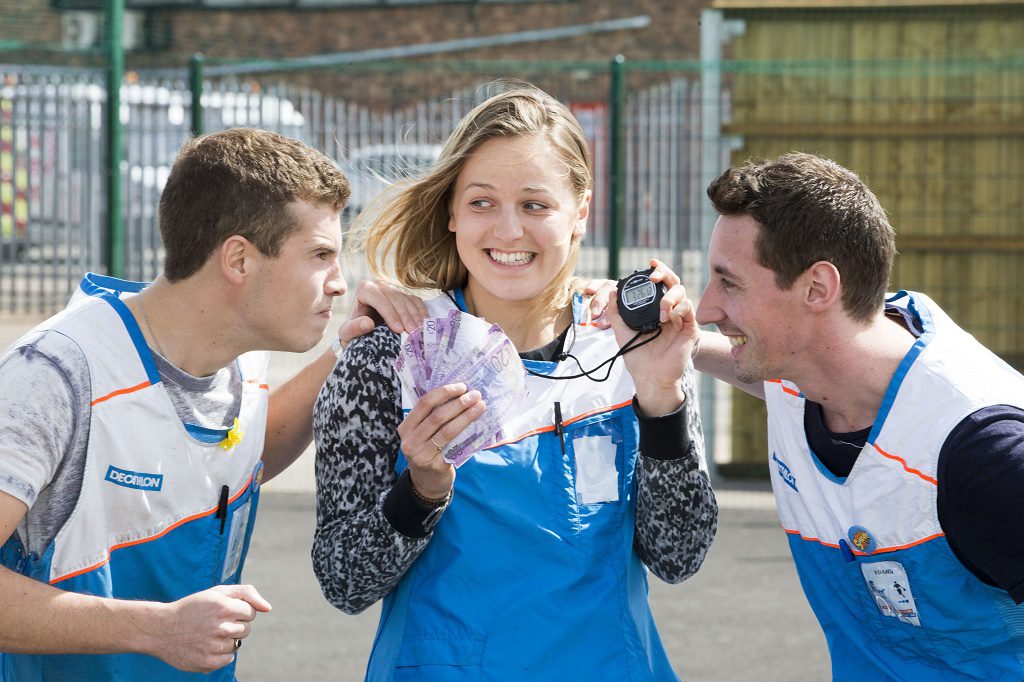 YOU can bet your bottom dollar that Amaury Wicquart and Stuart Terris are training hard for the Paisley 10k Race. After all, there’s a £100 wager at stake to see who runs the fastest time in the big race on Sunday, August 21.

The two runners – who both work for one of the Paisley 10k and Fun Run sponsors, Decathlon – are pounding the streets getting fit to make sure they take the bragging rights and win the £100 bet.

Stuart, 24, even runs from his home in Ralston, Paisley to his work at Decathlon, near intu Braehead most days, as part of his training schedule.

Stuart Terris and Amaury Wicquart in training for the Paisley 10k as colleagues, from left Maciek Zawadzki, Jonathan Younge (correct) and Bertille Mazure look on

Amaury, who is from Lille, in France and ran competitively in the 3000m steeplechase event when he was younger, said:
“Everyone here at Decathlon is very sporty and competitive and that’s particularly the case for Stuart and me.
“Some of us were out together playing ten-pin bowling recently and Stuart beat me by only seven points. So, me beating him in the Paisley 10k will be revenge for that.
“Although I used to run competitively, I haven’t raced for about six years. But I’m training hard, running the 10k distance three times a week.
“I know Stuart is a good runner and he likes to win, but so do I. Both of us are taking this bet very seriously and there a lot at stake, so I’ll definitely win.”

However, Stuart, who recently ran in the Torshavn Marathon, on the Faroe Islands, has other ideas.
“When we were talking about entering the Paisley 10k, Amaury said he would run it faster than I would. I told him no way would he beat me and he should put his money where his mouth was and that’s how the bet came about.
“I’m 100 per cent confident I’ll beat him. I’ve been running 10k races for years and I’ve done the Paisley 10k four times. I reckon I can do the course in 36 minutes and there’s no way Amaury is going to beat that.”

The Paisley 10k Race and Fun Run is on a flat course and is organised by Renfrewshire Leisure in conjunction with Renfrewshire Council. Last year it attracted almost 2000 runners many of them raising money for charities and good causes.

It’s sponsored by Paisley First and Decathlon and for the second year, Macmillan Cancer Support is the Paisley 10k Race official charity partner.

Renfrewshire Leisure chief executive, Joyce McKellar said: “It looks like there’s going to be a real competitive edge to this year’s Paisley 10k with Amuary and Stuart. We’ll be looking out to see who crosses the line first.
“But well done to the two lads and their colleagues for signing up for the race.
“There’s still time for anyone who wants to take part in the Paisley 10k, or the much easier Fun Run to register. As well as being an attraction for the serious competitive runners, it’s a great family event and tens of thousands of pounds are raised for charity.”

You can register for the race by logging on to  www.renfrewshireleisure.com by telephoning 0141 842 3000 or picking up an entry form from any Renfrewshire Leisure venue.