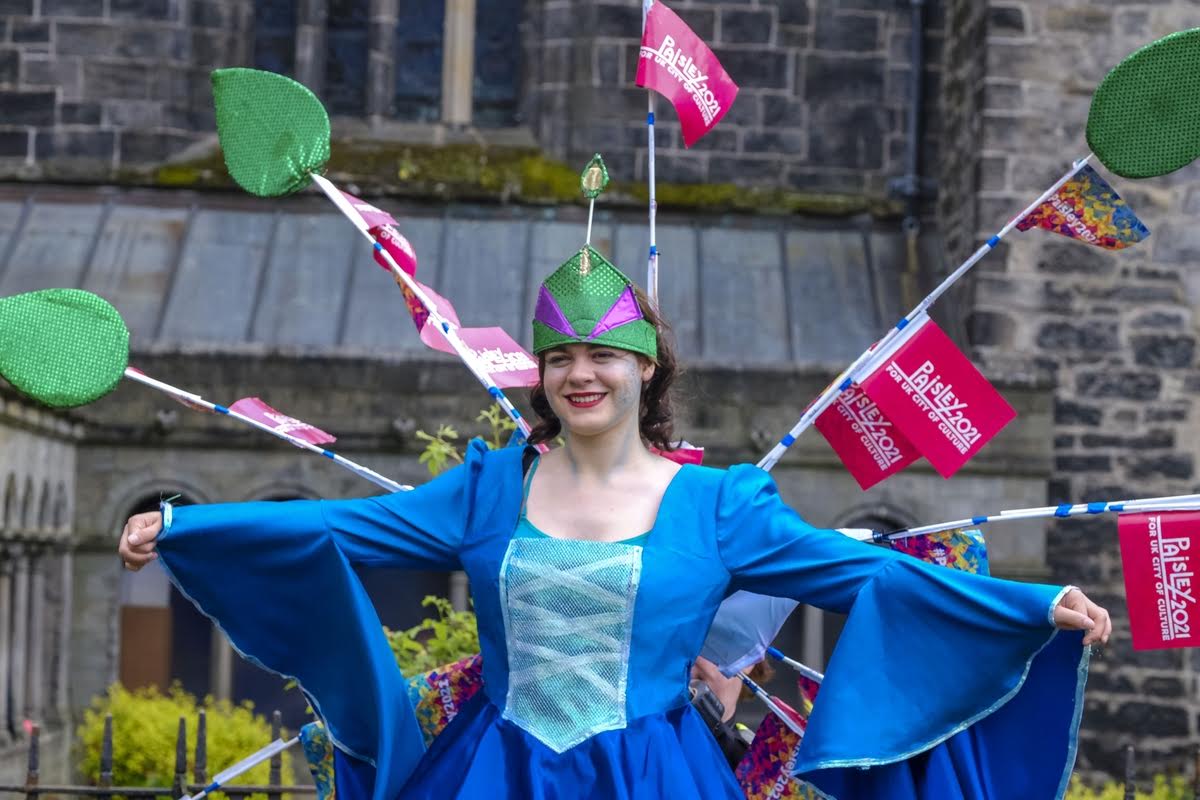 Paisley celebrates its most radical story with two-day festival

Thousands helped Paisley celebrate one of the oldest workers’ festivals in the world – Sma’ Shot Day – with a weekend of history and heritage.

Costume-clad kids, street performers and families joined the parade led by the Charleston Drum – the traditional means of calling the weavers out for their annual festival.

An afternoon-long party of live music and entertainment took place on Abbey Close – featuring performances from PACE youth theatre and Renfrewshire Witch Hunt 1697 – all building up to the traditional Burning of the Cork.

The festival began in 1856 after the Paisley weavers won their dispute with the manufacturers to be paid for the Sma’ Shot – a hidden cotton thread that held the Paisley Pattern shawls together.

It’s one of Paisley’s most spectacular stories and couldn’t be better timed as a new campaign – What’s Our Story? – is launched asking local people to share what makes Paisley and Renfrewshire great and help transform the region’s image.

The campaign aims to capture the everyday moments and tales that make the area one of Britain’s most exciting and diverse to live in.

Renfrewshire’s Provost Anne Hall says: “Sma’ Shot Day is a fantastic piece of history for the town and a huge boost as momentum builds on our bid for UK City of Culture 2021.

“In celebrating the struggle of the Paisley weavers to receive rightful compensation from their employers – the manufacturers of the Paisley Pattern shawls – it’s an event that shows we are renowned as passionate, radical people.

“Sma’ Shot is just one of the town’s stories and we know there are lots more the people of Paisley and Renfrewshire have to tell. What’s Our Story? is all about capturing the full, authentic warmth and vibrancy of local people.

“A new brand for Renfrewshire must come from the people who live, work and study here. It is for that reason twe are asking everyone in Renfrewshire for their help.”

The weekend’s entertainment continued with the popular poetry slam and two radical theatre productions – From the Calton to Catalonia and specially-commissioned Silver Threads.

Sma’ Shot Day is part of an exciting calendar of events for Renfrewshire that supports Paisley’s bid to be UK City of Culture 2021.

The bid is taking place as part of a wider push to transform the town’s future using its unique cultural and heritage offering as the home of the Paisley Pattern and the one-time centre of the global textile industry.

To submit your story about Paisley or Renfrewshire, visit WhatsOurStory.co.uk, share your story on social media using #MyStoryMyTown or complete one of the comments cards.

Thanks to warrenmedia for the images.

Paisley’s bid for UK City of Culture 2021 will use the town’s unique and fascinating story to transform its future – by putting the town in the international spotlight, attracting visitors, creating jobs and using culture to make people’s lives better.

The UK City of Culture competition is run by the UK Government. The shortlisted cities will be announced in spring 2017, and the winner at the end of the year. Find out more about our story at www.paisley2021.co.uk.

Sma’ Shot Day celebrates the victory of Paisley’s weavers over the town’s mill owners in the 19th century.

The owners refused to pay their staff for the Sma’ (small) Shot thread, which was unseen but held together the famous Paisley Patterned cashmere shawls.

University of the West of Scotland (UWS) won the Best Partnership Award for...
Scroll to top