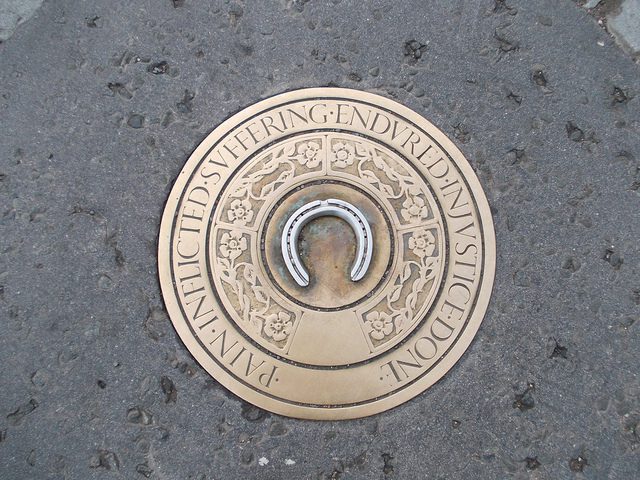 Paisley had an infamous case of witch hunting in 1697.

The Paisley witches, also known as the Bargarran witches or the Renfrewshire witches, were tried in Paisley in 1697. local people in period costume to re-enact the day

Eleven-year-old Christian Shaw, daughter of the laird of Bargarran, accused 35 people of witchcraft and seven were later tried and found guilty of witchcraft.

On 17 August 1696, eleven-year-old Christian Shaw, daughter of the laird of Bargarran, saw one of her family’s servants, Catherine Campbell, steal a drink of milk. Shaw reported the theft to her mother, whereupon Campbell cursed her, wishing that the Devil would “haul her soul through Hell”. Four days later Shaw encountered Agnes Naismith, an old woman reputed to be a witch. The following day, 22 August, Shaw became violently ill with fits.  She later began to pull out of her mouth balls of hair she claimed had been put there by those who were afflicting her. Soon she began to pull other “trash” out of her mouth, including straw, coal, gravel, chicken feathers, and cinders. During her fits she was sometimes heard to be talking to the invisible Catherine Campbell, pleading for a return to their former friendship.  Unable to provide any rational explanation for Shaw’s condition her family and their local parish minister concluded that she must be possessed and being tormented by witches.  Shaw’s father appealed to the authorities that those named by his daughter as tormenting her should be arrested. As a result 35 people were accused of witchcraft and seven were later tried and found guilty of witchcraft.

They vigorously denied the allegations but a court consisting of local ministers, wealthy landowners and government officials found them guilty of having bewitched Shaw. Agnes Naismith cursed everyone present at her trial and their descendants, and for many years afterwards every tragedy in Paisley was blamed on her curse.

On 10th June 1697 the six remaining witches were hanged and then burned on the Gallow Green, at the west end of Paisley.  This was the last mass execution for witchcraft in western Europe.

One account of the executions states that some of the condemned were still alive when their bodies were burned, and that the executioners borrowed a walking stick from an onlooker with which to push their victims’ moving limbs back into the fire

Their remains were interred at the crossroads where Maxwellton Street crosses George Street and a horseshoe was set in the road.  This was supposed to prevent the witches’ spirits from returning to haunt the living.  The horseshoe later became dislodged due to the amount of traffic passing over it.  The horseshoe was put back in place however it later disappeared and many people believed that Agnes Naismith’s curse had come true as it led to a period of decline for buddies.

In May 2008 a new horseshoe was designed by Sandy Stoddart and laid at the crossing. The inscription on the horseshoe reads “Pain Inflicted. Suffering endured. Injustice done”. Mystery and intrigue has long surrounded the slaying of the so-called “Paisley witches”.   There are many myths about the events surrounding Christion Shaw and the executions. The mass execution was one of Paisley’s darkest periods in history.
The alleged Paisley witches, who were simply ordinary countrymen and women who used herbal remedies and forecast weather by studying natural phenomena like the light patterns of birds and the behaviour of cattle and sheep, were executed in a brutal display of medieval paranoia.

In June 2010, a poignant ceremony took place in Paisley in memory of the seven people killed then set on fire 313 years earlier after being labelled witches. A wreath was laid at the site, just off Queen Street and next to Tannahill’s Cottage, in honour of the victims. The ceremony had been organised by the Paisley Development Trust and Councillor Eileen McCartin attended the event as well as members of the public. In August 2011 a research group was set up to re-investigate the events of the witch hunt and to retell the story.

On 9th June 2012, a re-enactment of the Renfrewshire Witch Hunt of 1697 took place.  The story of the witch hunt was told in stages throughout the day and culminated in a procession of the witches through the town to Abbey Close where despite desperate pleas of innocence they were condemned to death. The second re-enactment took place on 5th October 2013.  Paisley’s County Square was transported back to 1697 to witness the trial and ultimate execution of the accused before a horse-drawn cart took the witches to Abbey Close where they were symbolically burnt.

Although the accused were never officially pardoned the memorial which took place in June 2010 was a poignant gesture of respect for the tragic events of 1697.

I’m sure you will agree that this is a scandalous part of Paisley’s history.

How in this day and age can we explain Christian Shaw’s behaviour, was she really cursed, was Agnes Naismith really a witch, and is there even such a thing as a curse?
I will leave that for you to decide. Perhaps the reinstatement of the horseshoe at Maxwellton has allowed Paisley to finally move on from Agnes Naismith’s curse.
.
https://www.paisley.org.uk/wp-content/uploads/2016/06/paisley-witches.jpg 480 640 Brian McGuire https://www.paisley.org.uk/wp-content/uploads/2015/09/paisley-logo-trans.png Brian McGuire2016-06-17 13:07:172021-05-13 19:35:29Paisley Witches