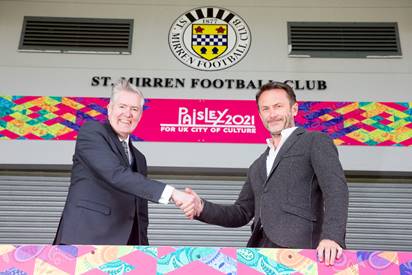 The team behind plans to make St Mirren the latest fan-owned club in Scottish football are urging Buddies not to miss out on the chance to make history as the deadline for sign-ups closes in. The St Mirren Independent Supporters Association (SMISA) has teamed up with former club director Gordon Scott on a joint offer accepted by the consortium selling a majority shareholding in the club.

But the #BuyTheBuds campaign will only go ahead if 1,000 fans sign up to pay £12 per month – with another 150 sign-ups needed before Sunday’s fundraising deadline falls.

If it goes through, Gordon would become chairman this summer under a similar model to Ann Budge and the Foundation of Hearts – with SMISA getting a fan on the board and the exclusive option to buy Gordon’s shares and achieve majority fan ownership within the next ten years.

Gordon and SMISA chairman George Adam both met the media at the Paisley 2021 Stadium to help lead the final push for sign-ups.

Both will also be out tonight (MONDAY) during the last in a series of public meetings allowing fans to pose their questions directly to the team behind the deal.

And construction boss Gordon – who masterminded the building of the stadium during his previous stint on the board – said: “We have had a phenomenal reaction from fans in the two months of fundraising – and we want to thank all those who have signed up for their support.

“I would be honoured to become the chairman of the club I have supported all my life. If the deal goes through I will look to bring on to the board people who have what it takes to help me move the club forward and take it back into the top league where it belongs.

“I plan to do that by working with the community and local businesses to make the most of the great facilities and location we have here – and working with SMISA to give the fans a greater influence on what happens with St Mirren than they have ever had before.”

SMISA chair George Adam added: “We have been working away behind the scenes on this deal for more than a year now – and it all comes down to what happens in the next few days.

“This week could be a momentous one in the history of the club – but the opportunity St Mirren fans have in their hands over the next few days is one they might not ever have again.

“If we take it, we control the future of our club and can safeguard it and everything it means to the Renfrewshire community forever.”

For more information and to sign up, visit  smisa.net