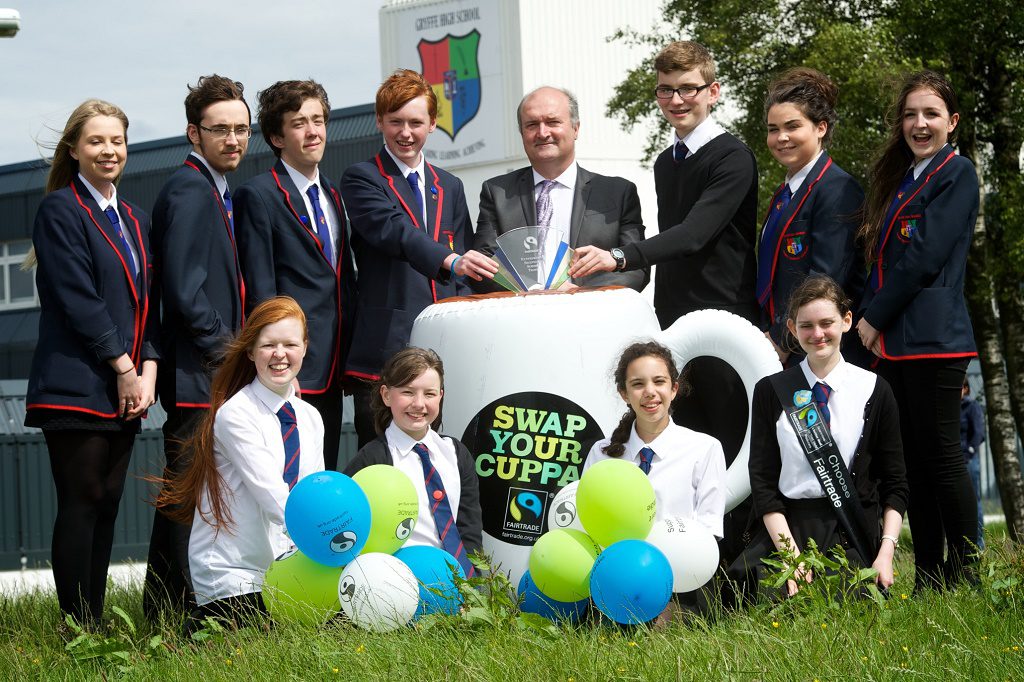 Gryffe High School have been awarded the Renfrewshire Secondary Schools Trophy for Fair Trade for the second year in a row. The school were chosen as the best in Renfrewshire due to their outstanding work both within school and in the wider local community.

Gryffe completed a number of activities throughout the year which engaged pupils on the issue including a Fairtrade curry night, meeting a producer from Swaziland, undertaking a survey of the local community on fair trade and also hosting the Renfrewshire Fairtrade Steering Group meeting within the school.

The school also embraced Fairtrade Fortnight and held a rich person v poor person breakfast- where pupils recognised the differences in everyday life for those in poorer countries-, held a bake off where all cakes had to use Fairtrade ingredients wherever possible, invited the local community to a coffee morning and held stalls from local fair trade organisation Rainbow Turtle which raised £568.06.

The Renfrewshire Fairtrade Steering Group awards the trophy with the aim of encouraging secondary schools to incorporate fair trade into pupil learning- something Gryffe have excelled in- while supporting schools to achieve Fairtrade status as awarded by the Fairtrade Foundation.

The school which displays the drive and ambition to make fair trade a part of everyday school life while encouraging pupils to practice this outside of school hours is chosen as Renfrewshire’s best.

Councillor Jim Sharkey, Chair of the Renfrewshire Fairtrade Steering Group, said: “I’m delighted to award this trophy to Gryffe for the second year in a row and they fully deserve it for the outstanding work they have completed this year.

“I admire the level of commitment their pupils have for fair trade and their citizenship committee have really engaged the whole school with the wider message of fair trade.

“I hope this award motivates the other secondary schools in Renfrewshire to try and take Gryffe’s crown next year- with the most important point being that our pupils recognise the importance of fair trade and the part it will play in our future.”

Colin Johnson, Gryffe High School Head Teacher, said: “We are delighted to have won the secondary school trophy for the second year running. It is a fantastic way of recognising our pupil’s commitment to fair trade.

“Over the past year we have promoted fair trade in a number of new ways including hosting a Fairtrade curry night and a community coffee morning. We would like to thank the local community and parents of Gryffe for supporting us in this endeavour.”

Renfrewshire’s schools are encouraged to move towards Fairtrade school status by undertaking the Fairtrade Schools Award, which looks to develop the knowledge of fair trade of children, at primary or secondary level.

The 3 stages of the award aim to teach children how to be involved in changing the world around them, encouraging them to know that they can make a difference and that through supporting and promoting fair trade in your school, they can empower farmers and workers in marginalised countries.

If you are interested in fair trade, the Renfrewshire Fairtrade Steering Group is always looking for new members.