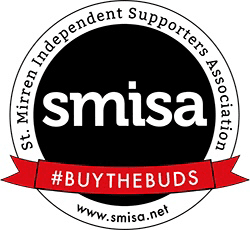 The bid to take St Mirren into the hands of its supporters has received some big-name backing – with best-selling author Chris Brookmyre issuing a plea to fans to join him in signing up.
Writer Chris and TV acting star Douglas Henshall were among the near-400 fans who signed up to the #BuyTheBuds campaign in its first week. The St Mirren Independent Supporters Association (SMISA) has had a joint offer with former Saints director Gordon Scott accepted in principle for the majority shareholding in the club – but need 1,000 fans to join this summer before the deal can happen.

And Chris sent a message of support to the trust, saying: “Clubs like St Mirren are all about community.

“As fans we all invest emotionally in the club, so it make sense that we should take that a stage further.”

Chris had initially tweeted to his 14,000 followers that he had joined, posting a link to SMISA’s website, and then retweeting a link to a Paisley Daily Express story about the fan bid.

Actor Douglas – known for his starring roles in TV shows Primeval and Shetland – then tweeted Chris back to say he had signed up too.

Both men are originally from Barrhead and have talked about their support for the club throughout their careers.

Full details of how you can join Chris and Douglas and sign up to #BuyTheBuds are available at www.smisa.net now – fans can sign up from £12 per month.

If the deal goes through, Gordon would become majority shareholder and chairman of St Mirren and SMISA would get a director on the board – with an option to buy Gordon’s shares and achieve majority fan ownership within the next ten years.

SMISA chair George Adam added: “We have had a fantastic response to our first week of fundraising – we want to thank every one of the near-400 fans who have pledged their support so far.

“We put this deal on the table because we believe it offers the best possible future for St Mirren.

“This is a one-off chance to ensure St Mirren’s next set of owners will be people who will keep the club where it belongs, at the heart of the Paisley community, forever.

“But that chance will be gone if we don’t get 1,000 fans signing up this summer. So I would urge anybody who hasn’t yet signed up to do so now at www.smisa.net.”