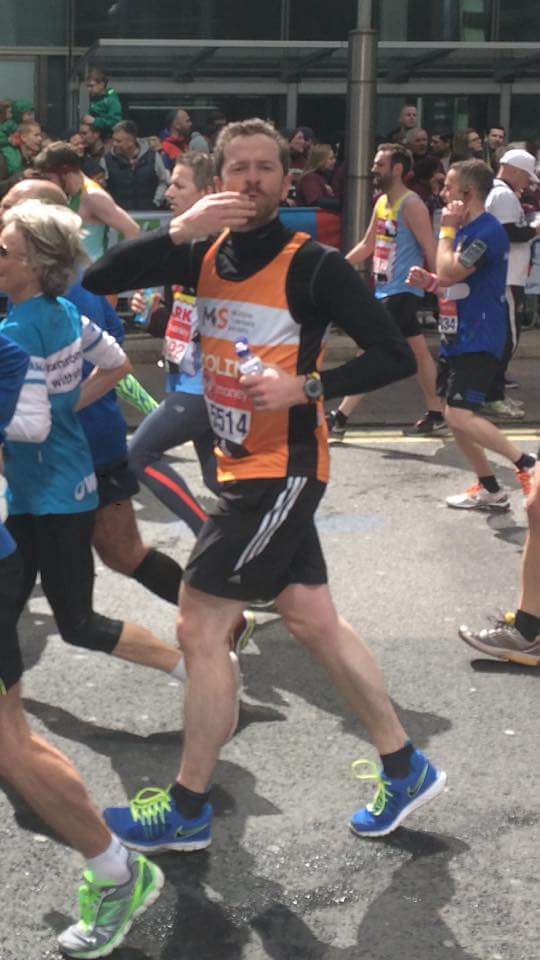 Ice hockey star Colin McMillan showed at the weekend that not only is he no slouch around an ice rink when playing for the Paisley Pirates and coaching Lanarkshire Lightning Junior Ice Hockey Club, he can also move pretty rapidly without the aid of his skates. Fresh from celebrating the Pirates’ Scottish Cup win against Edinburgh only a week ago, Colin barely had time to come back down to earth again before heading off to London with his family to take part in the London Marathon on Sunday, where he was running in aid of the Multiple Sclerosis Society, having recently found out that two of his friends were suffering from the condition. “I had huge support from family and friends in terms of sponsorship,” he explained. “My original target was to raise £250, but at the moment it looks like the final figure might tip over the £1300 mark. I’m absolutely delighted with that, and want to thank everyone who took the time and trouble to support me, not just in financial terms, but just letting me know that they were thinking about me and the run ahead. It really makes a difference, particularly when you’re getting a bit tired, to know that so many people are rooting for you.”

Colin got round the 26.2 mile course in the highly creditable time of 3:58:52, although he expressed a little disappointment with his time. “It wasn’t a personal best, which I was hoping to achieve, but I was carrying a bit of a foot injury which certainly added a bit to my time. I suppose I’m satisfied with the time, I got round the course in less than four hours without mishap, and I’ve now got a target to aim for next time out. Most important of all, the Multiple Sclerosis Society will be £1200 better off and that’s the main thing.”

“It’s been a great break in London,” he went on. “My wife Rae and I came down a few days early to see some of the sights with our two kids and friends, and they were all there to catch me when I finished on Sunday. The atmosphere was something special, folk have been telling me they got glimpses of me on the TV, and it was just a great event to be part of. It’s been a great couple of weeks, but I think I might just take a week or two off now and give my aching feet time to recover!”