What began as a spark of an idea during a chat between Glasgow Airport and McGill’s became a lightbulb moment. 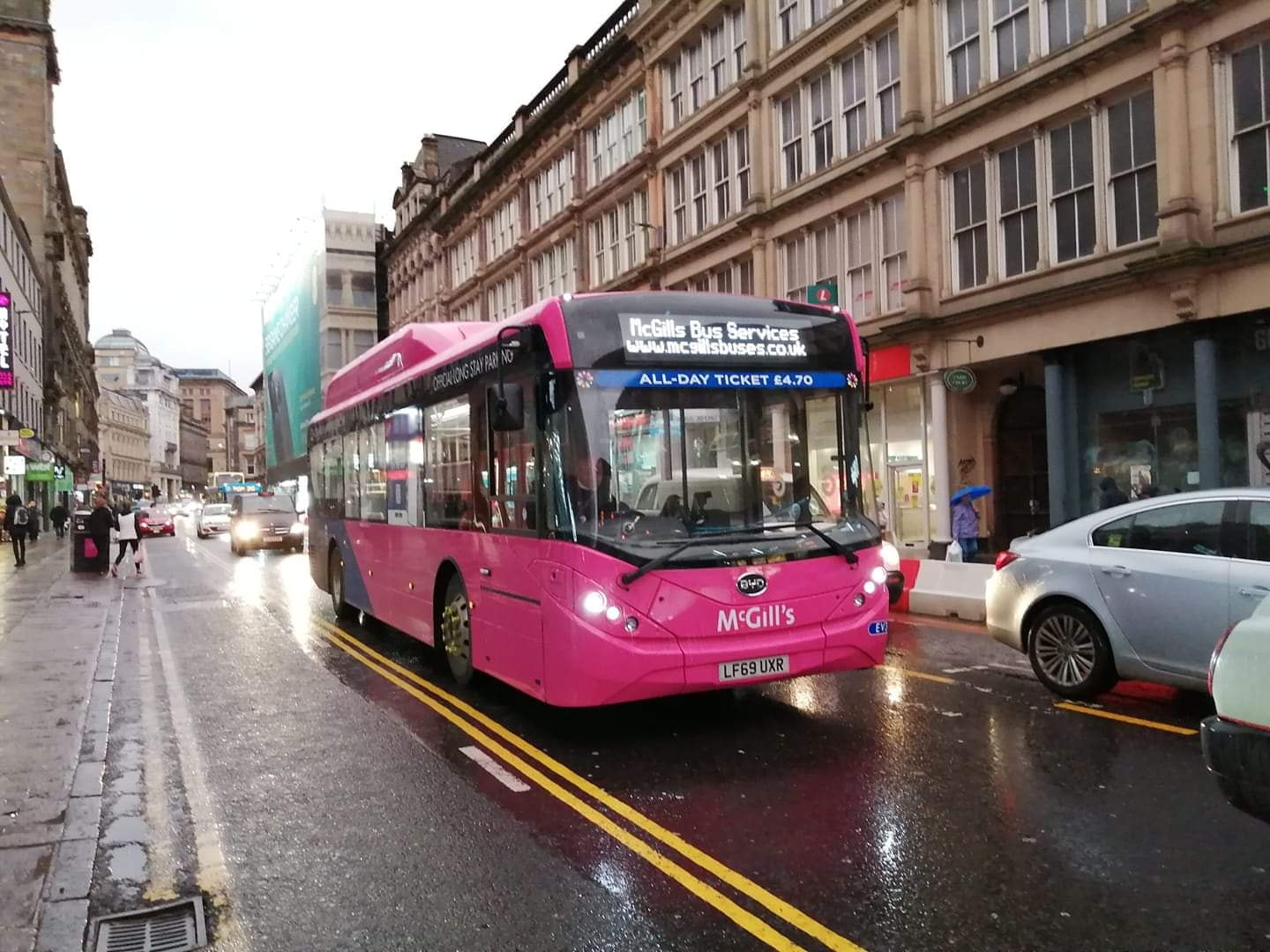 Glasgow Airport’s fleet of three BYD ADL Enviro200EV electric buses, normally operated by NCP to transport passengers between the terminal and the long-stay car park, were parked up as passenger demand dropped due to the pandemic.

When strict travel restrictions were put in place, the zero-emission fleet unexpectedly found itself off the road, sparking discussions with local operator McGill’s Buses.

Seeing a great opportunity to take three diesel buses off the road, while allowing customers to test out the electric vehicles before the arrival of their own, McGill’s introduced the vehicles onto their 757 service, operating between Paisley and Clydebank, via Glasgow Airport.

Ronald Leitch, operations director at Glasgow Airport, said: “The airport’s long-stay car park was offered to the government early in 2020 as a possible COVID-19 testing site to help support the national effort to defeat the pandemic and is still use today.

“This meant that our fleet would sit unused for a long period of time and it seemed like a waste of such a fantastic resource. The BYD ADL electric buses have been a fantastic addition to our network and when in operation they helped cut the carbon emissions associated with passenger travel to and from the long-stay car park from 143 tonnes per year to zero.”

“We were aware that McGill’s planned to introduce this type of bus to their own transport network and were happy to help McGill’s test the buses on their daily operation ahead of this.”

McGill’s are awaiting the arrival of 55 Yutong E12s, as well as their own BYD ADL Enviro200EV. Having also ordered 12 BYD ALD E400EVs for the newly purchased Xplore Dundee, by the end of the year, McGill’s will have the largest percent of their fleet zero emissions in Scotland.

McGill’s operation director, Colin Napier said, “Introducing these electric vehicles to our 757 Glasgow Airport service has allowed us to give customers a taste of what is to come.

The feedback from customers and drivers alike has been overwhelmingly positive and leaves us excited for the arrival of our first electric vehicles later this year.”

The state-of-the-art fleet was the launched in 2019 when Glasgow became the first airport in the UK to introduce electric buses to its operations.

When introduced, it was the first time the BYD ADL Enviro200EV model has been operated anywhere in Scotland and its introduction at Glasgow Airport was made possible thanks to a £450,000 Green Bus Fund support grant from Transport Scotland.

What Are the Effects of CBD on Productivity and Well-Being?
Scroll to top
Go to mobile version