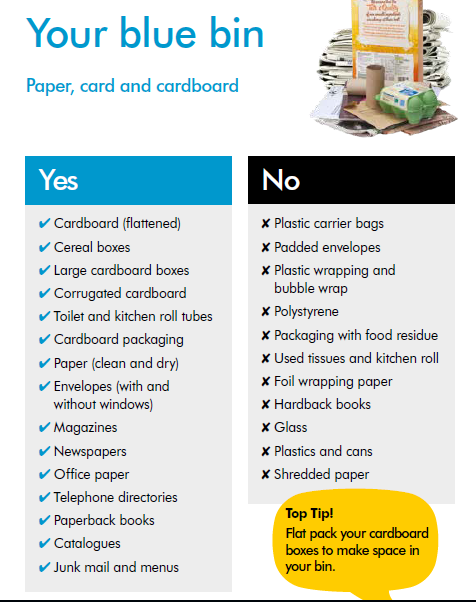 A campaign is set to get underway to tackle contaminated recycling bins as part of a drive to further improve the quality of recycling in Renfrewshire.

From 17 February, collection teams will be checking blue recycling bins for anything that isn’t paper, card or cardboard in a bid to reduce the cost of processing and to improve the environment.

If bins are found to be heavily contaminated, then a red tag will be placed on the bin outlining that it will not be collected until the contaminating items are removed.

Residents will then have two days to contact the council, in line with the missed bin process, to advise it has been cleared and it will be collected from outside their home within the following five days.

Councillor Cathy McEwan, Convener of Renfrewshire Council’s Infrastructure, Land and Environment Policy Board, said: “Firstly, I want to thank our residents for the way they’ve engaged with the new bin collection service as they’ve recognised the difference that recycling can make to our local environment.

“This is the next step is improving the recycling we collect even further, and we want people to recognise that they need to use their recycling bins correctly – with an initial focus on the blue bin before moving onto our other recycling bins in the near future.

“By ensuring you only place paper, card and cardboard in your blue bin, you will be making a real difference to our local environment as well as lowering the cost to process recycling and allowing us to reinvest this money in our key public services.

“More and more, people are recognising the importance of recycling and we’re here to support you with whatever you need to recycle effectively.”

The introduction of a new recycling bin in December 2018 for plastics, cans and glass has seen the recycling rate in Renfrewshire increase in every quarter since, although contamination remains a costly issue with the cost of disposal increasing depending on the level of contamination.

The campaign to tackle contamination is just one of a number of ways that Renfrewshire is improving its environment and tackling climate change, with the Clyde Valley Waste Project ensuring that at least 90% of Renfrewshire’s non-recyclable waste is turned into energy and diverted from landfill.

For more information on recycling in Renfrewshire, and an indicative list of what should and should not go into the blue bin, visit www.renfrewshire.gov.uk/mybins or contact the team via mybins@renfrewshire.go.uk.

How will Bitcoin Affect Casinos?
Scroll to top