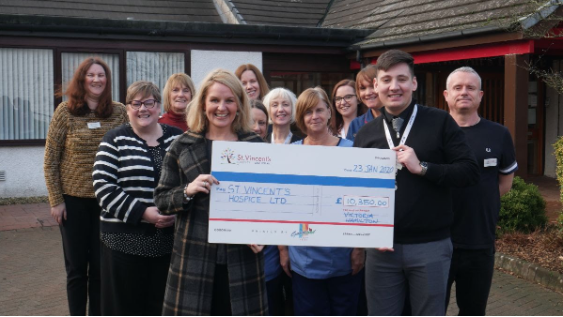 Victoria Hamilton from Kilmacolm has successfully raised more than £10,000 for St. Vincent’s Hospice after an intense year of fundraising, which concluded by completing the Loch Ness Marathon, in memory of her father who sadly died in 2018.

After being diagnosed with terminal bowel cancer, Victoria’s dad (Tom Maitland) was admitted to St. Vincent’s Hospice in October 2018, where he spent 27 days in their care before sadly passing away on the 14th of November.

Victoria said: “My dad spent 27 days in the Hospice, quite a lengthy stay compared to some others. After he died, I estimated that to provide this care must have cost around £10,000 and I decided I was going to repay this. That was a very daunting figure at first, so I just set about breaking it down into smaller targets.

“I was able to work with my daughter, Olivia and her school, St. Colomba’s, were generous enough to support her contribution by holding a bake sale and movie night, which raise £800. The Old Ranfurly Golf Club, where Dad was a lifelong member, held a Texas Scramble event which raised £350, and my friend Alyson Scott held a coffee morning which raised another £825.”

Above and beyond the support of her friends, family, and various donors throughout the community, Victoria received incredible support from her former employer HSBC, which provided fund matching of more than £1,000, along with several members of staff from the John Lewis Financial Services Team who raised a further £1,000.

All of these efforts culminated with Victoria tackling her biggest challenge to date, the Loch Ness Marathon, in October 2019.

She added: “I had run the London Marathon before, so I knew what I was letting myself in for in terms of the training and gruelling runs. If I never see the cycle path between Kilacolm and Johnstone again it will be too soon! I also knew that it had added challenges or being across challenging terrain, and steep hills. But in spite of that I was able to complete the marathon in four hours and nine minutes.

“I am so grateful and really humbled by the support that everyone has shown. I really do view this as an example of what can be accomplished when a community comes together and gets behind something. Taking on this challenge really has helped my recovery following the loss of my dad and helped turn a negative into a positive.

“To have not only met the target but surpassed it by raising £10,350 is absolutely overwhelming and I cannot thank everyone enough for all their support.”

St. Vincent’s is a specialist provider of palliative care for people living in Renfrewshire who have been affected by life-limiting conditions, including cancer, heart failure and Motor Neuron Disease.

Chief Executive of St. Vincent’s Hospice, Kate Lennon, said: “For one individual, going through such a difficult time to find the energy and determination to undertake such an unbelievable challenge is truly incredible and we cannot express how thankful we are for everything that Victoria has done for our Hospice.

“To raise more than £10,000 will make an immeasurable difference to the lives of people in the local community who need it most, making sure that we are here not just for the patient, but their families and loved ones throughout their journey.

“On behalf of everyone at the Hospice and beyond, thank you Victoria!”

The importance of reading for children
Scroll to top