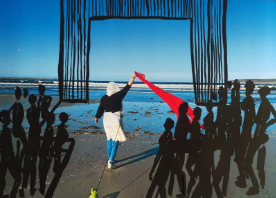 Fault Lines is a reimagining of a fashion show, looking to show the boundaries between how we look and how we see other people. Two Destination Language have assembled a truly diverse cast in terms of age, ability and race, and will have them taking to the catwalk while audiences flick between audio channels silent-disco style, creating their own soundtrack. The channels move between audio description, pop bangers, colonial history, language exploration. No two people will get the same show.

A fashion show on the fracture of feminism and fabric.

Ride the wave – travel the catwalk.

Creating a catwalk experience like no other, award-winning theatre makers Two Destination Language present their most ambitious project yet as part of Edinburgh’s Manipulate Festival 2020.

Examining the ever blurring cultural lines between how we look and how we see each other, Fault Lines will bring five strong, brave and diverse femme performers together to share one stage, with each audience member choosing their own accompanying narrative.

It’s a cast that is diverse in background, diverse in colour, and diverse in ability. Audiences will meet Damyana Radeva, whose story was told so powerfully in Two Destination Language’s debut show Near Gone; Caroline Ryan, performer and award-winning BSL interpreter, who will be speaking her own script and her own dialogue throughout, privileging BSL and D/deaf audience members; Cindy Awor, a young actor who describes herself as “a Scot from Uganda,”; Welly O’Brien, a disabled dancer who performs without a prosthetic leg; Hannah Yahya Hassan, an autistic Scottish-Bahraini performer; and Rachel Glower, who performs in the show as well as stage manages, driving the cast on and ensuring they ride the catwalk.

The audience will experience the show as a kind of historical, political, musical silent disco. Using the Listen Everywhere app, every audience member will be able to navigate between six distinct channels at their own pace. This is the only show where you can flick between a playlist of guilty pleasures, a history of the domination of the English language, and personal narratives of otherness and belonging, each of these and more illuminating the flowing garments, breaking stilettos and killer looks sashaying down the runway.

This is a show that foregrounds the beauty in our differences. Under the experimental eyes of creative duo Alister Lownie and Katherina Radeva, Summerhall’s Old Lab will transform into an unorthodox runway for two world premiere performances with national tour dates to be announced later in the year.

Combining playfulness, movement and text, Fault Lines invites us to question our own assumptions in this powerful play of identity, equality and inequality in this time of tectonic shifts.  This is Susan Sontag meets America’s Next Top Model.

Glasgow News? Daily Updates part of our network
Ten-year Vision with bold ideas for how Paisley could look is unveiled