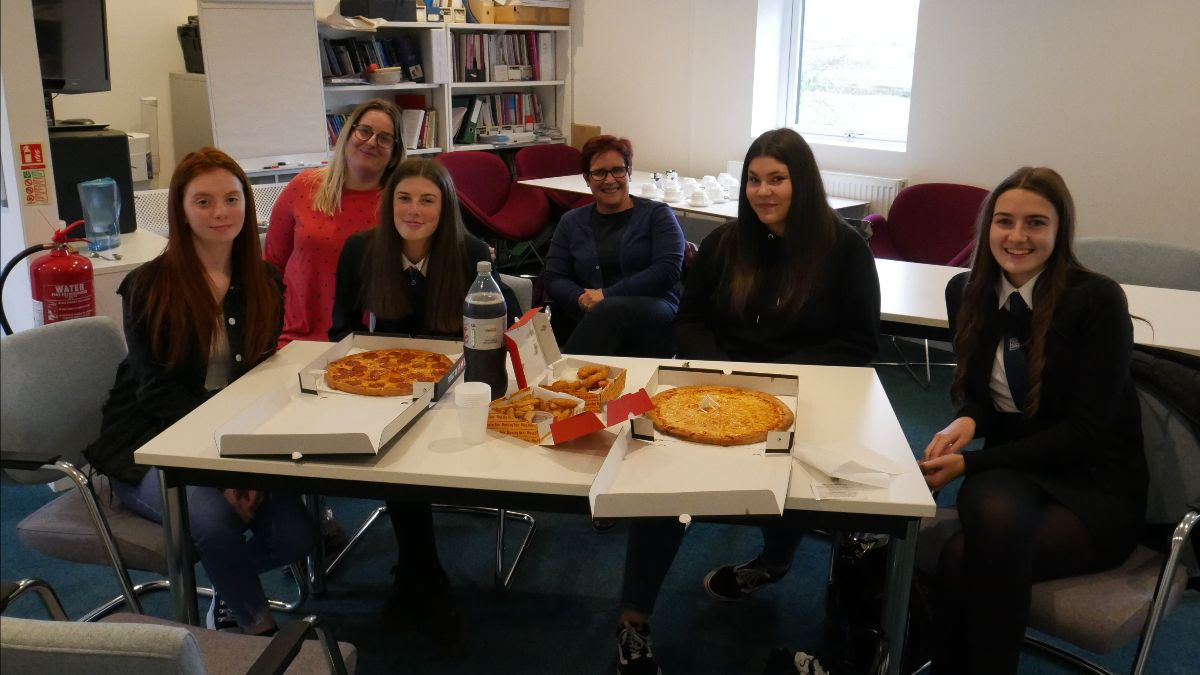 Pioneering ‘Girls Group’ at St. Vincent’s Hospice supports young people who have lost a loved one.

After suffering the loss of a loved one, a group of young girls in Renfrewshire have said they feel “stronger”, “closer” and more “understood” thanks to a pioneering project from the Children and Young People’s Service at St. Vincent’s Hospice.

The Hospice is one of the few organisations in the local community who are able to offer specialist support for people aged 2 – 18 following a diagnosis of life limiting illness or loss of someone close to them.

With the aim of providing a new outlet for peer support, St. Vincent’s recently launched their first “Girls Group”, bringing together a small group of pupils from high schools across Renfrewshire for a series of events and activities.

Children and Young People’s Bereavement Worker, Alison Provan, said: “I have been working with the girls on a one to one basis and they had all lost someone important to them. It was obvious they were each going through a hard time, particularly when it came to their friends.

“Much as friends will often try their best, it is often very hard to understand what someone who is bereaved is going through until you have experienced it for yourself. After a chat with one of the girls (Carly) we thought ‘what if we could find a way for girls going through the same thing to come together?’”

They reached out to Marion McConnell, Home Link Assistant, from St. Benedict’s High School, and decided this was a viable option to take forward in partnership. The group also received an extremely generous grant from Lisa’s Gift of £1,000, which allowed them to build a programme of fun activities.

Carly, 15 who attends St. Benedict’s and initially worked with Alison to develop the concept, said: “If you’re going through a bad day, your friends will try to be there for you, but they’ll say things like ‘it’ll be OK, you’ll get through it.’ But they don’t know what the feeling is like inside. But with the group, this is so much easier.

“I feel like I’ve gained friendships and become really close with everyone. It’s been great going out and doing things. Talking and having fun with people who understand, instead of being sad and just sitting in the house. I feel like I’ve gotten so much out of this!”

Rachel, 14 from Gryffe High, added: “I think a lot of people just can’t imagine losing someone like that. Sometimes you hear about things that are a ‘drama’ and think ‘you have no idea how bad things could be.’ But with this, with the group, you know they understand.”

The group met six times, focusing on fun bonding activities, including go carting, getting manicures, going for dinner and visiting the Christmas markets. The girls have also independently met up several times to volunteer on behalf of the Hospice.

Lauren, 15 from St. Benedict’s, said: “I feel better. I feel stronger. Before I joined the group, I felt weak. I was really shy and didn’t want to talk to people. Now, I believe in myself. I feel more confident and feel really comfortable talking to the girls, sharing my feelings. It’s been amazing!”

Alison added: “I’ve been so happy to see the difference this group has made to all the girls. Even though the group only ran for a short period of time, it has brought them all together in a way that you normally wouldn’t see happen in young people. More importantly, now that the group has come to an end, they are all staying in touch. They’ve built their own support network and I’m so proud of each of them.”

Following the success of the project, the Girls have decided to continue to support the Hospice and work together as the first group of Youth Ambassadors.
This is a brand new role for St. Vincent’s, which will not only help raise awareness and support for the charity, but will allow the four to develop vital skills and experience towards university and job applications in the future.