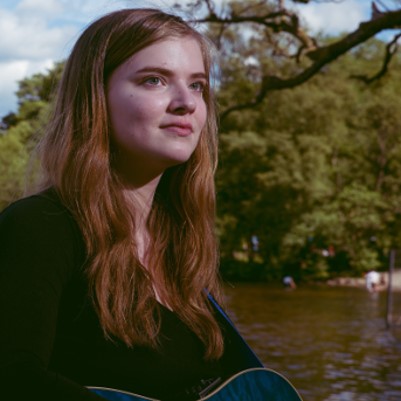 Like trying to fit a guitar shaped peg into a round hole, 19-year-old Paisley singer song writer Lisa Kowalski has been on quite a journey throughout her teenage years, trying to find her place and her people.

Since the age of 14, her guitar has been her prop, shield and fashion accessory and the lyrics of her songs have expressed an emotional mix of rejection and yearning, all the time mixed with hope, defiance and a  celebration of individuality.

After Releasing her Free Spirits EP in 2017, Lisa rode the wave of the Paisley UK City of Culture bid, being named as a “woman of influence” by the town Provost and appearing on TV and radio to represent a positive image of the town’s future.   Her name was discussed in the press alongside other Paisley greats such as Paolo Nutini and David Tennant and she was invited by the American Scottish Foundation to represent Scottish youth music at New York Tartan Week 2018. Lisa sang about her love of Paisley and its “Hearts of Gold” and the town loved her back, she had found her place.

Lisa’s songs directly reflect her personal journey. EP title track Free Spirits was written at age 16 after a not uncommon conversation with her parents about her struggles to gel with a friend group at high school. Not coming from a completely happy place, the song reflects her determination to disregard the difficulties of being different and retain hope for the future. 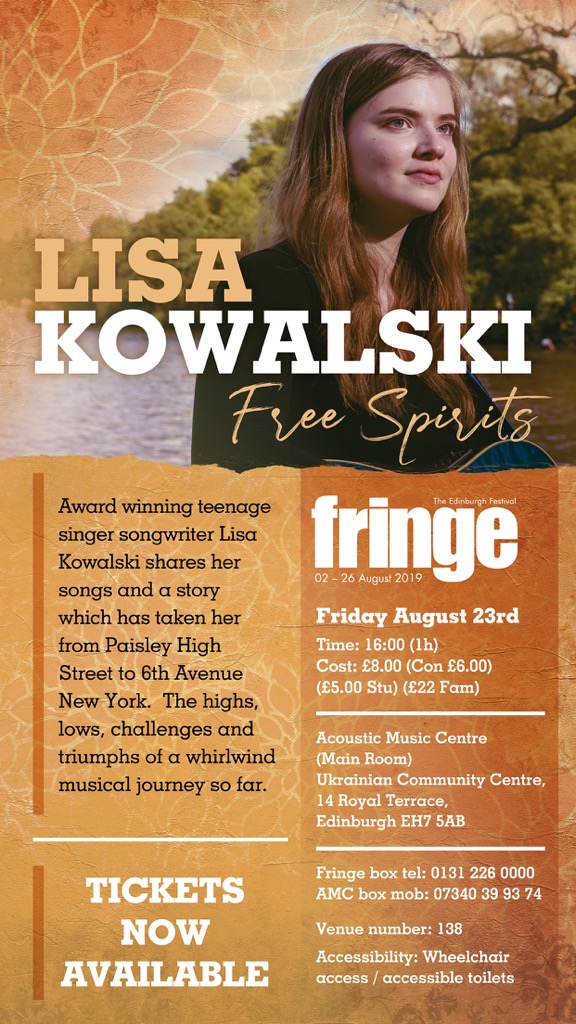 “You can try to be in a bad mood when you hear Free Spirits. You can try to cling to your grouch like a drunk to a bottle, but a couple of bars into the song and you’ll know it’s futile. It’s the second of four tracks on the EP of the same name – full of charisma and vitality, it’s a blazing start for the young singer-songwriter.”

A series of awards and accolades for Lisa’s song writing followed throughout 2017 and 2018 as her music was submitted to judging panels that included Feargal Sharkey, Imelda May, Tom Odell and Guy Chambers. One of these was a Salute Music UK award, a UK wide song writing contest in which over 2000 entries battled it out for the top six in a public vote.  Lisa’s prize included a headline gig at King Tuts on the night of her 18th birthday, an event which both terrified and delighted her.

While the music was doing incredibly well, Lisa was beginning to struggle personally. She was losing her connections at grass roots level and struggling with confidence after the end of a toxic relationship. An inability to get support exacerbated the situation and eventually, at the end of 2018, she was compelled to take a break from her music to work on mental health issues. Suffering from anxiety and depression that is sadly far from unusual amongst young creatives, Lisa had to walk away from the persona portrayed in her Hearts of Gold video, smiling, warm, happy Lisa, laughing and dancing with children and mascots.

Having received support and counselling and a big dose of self-healing, Lisa emerged from her break in Spring 2019, travelling to England to compete for a chance to perform at Glastonbury Festival’s Pilton Party and receiving an invite to return to New York Tartan Week next year. The journey and the adventures have begun again.

Lisa’s Free Spirits show is her first self-curated solo musical performance. She has put on a show in the capital before, a 2017 multi-artist Taylor Swift tribute, designed purely to celebrate music and entertain. Free Spirits is purely about Lisa’s own story, using her songs both to entertain and to communicate what she has experienced and learned so far and where she aims to go next. At 19, she may no longer represent “youth music” but will continue, locally and internationally, to represent Paisley and Scotland, the dreamers, those with mental health issues, young women and, of course, all her fellow free spirits.

Glasgow News? Daily Updates part of our network
Ray and Harvey will make a grand entrance on to the stage