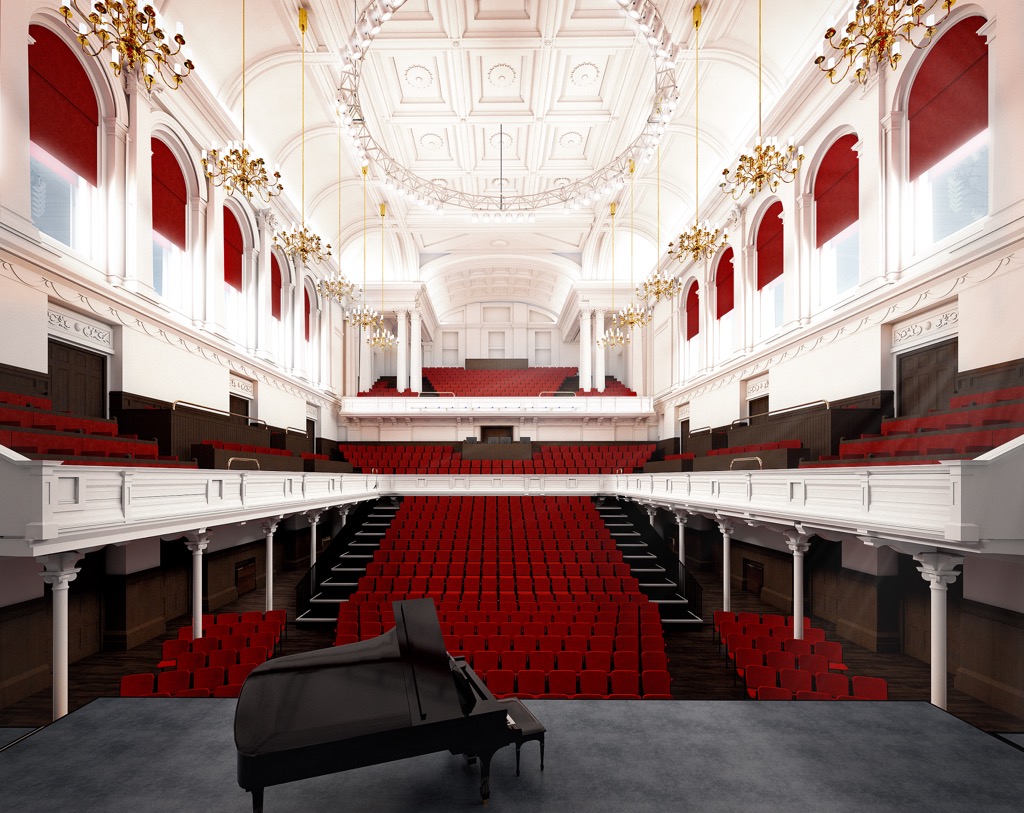 The people of Paisley are getting their first glimpse at what to expect from their transformed town hall – including entirely new rooms inside the existing building, and an increased capacity allowing bigger-name performers to bring new life to the town.

The magnificent Victorian-era town hall is currently undergoing major internal refurbishment into what will be one of the West of Scotland’s landmark entertainment venues when it reopens in 2021.

Renfrewshire Council is leading the work to turn the much-loved 19th-century architectural gem into a 21st-century facility which will drive new footfall to the area, while delivering upgrades essential to keep it at the heart of local life for generations to come. 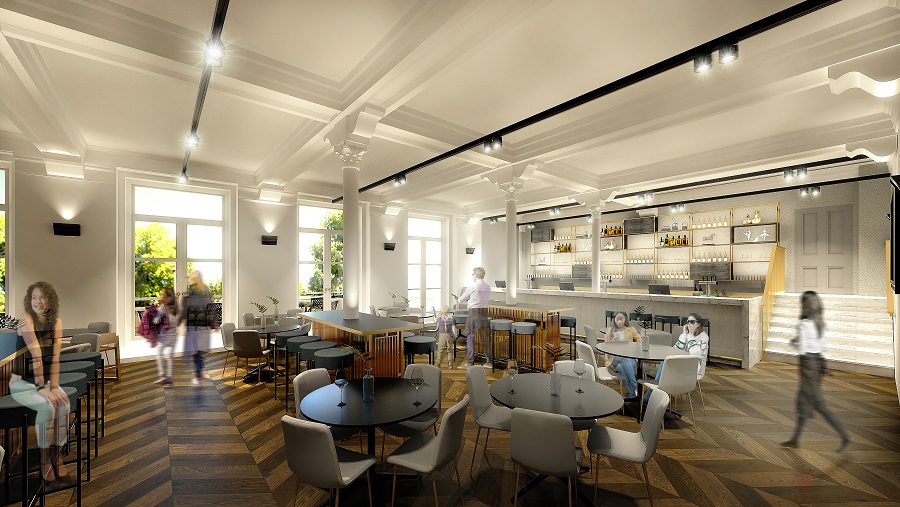 Some initial artist images have been released, with more to follow in the coming weeks, and features people can look forward to in the revamped building include:

– the capacity of the main hall increased to 1,200 for a standing gig, allowing the venue to attract bigger and better shows than ever before, boosting the local night-time economy; 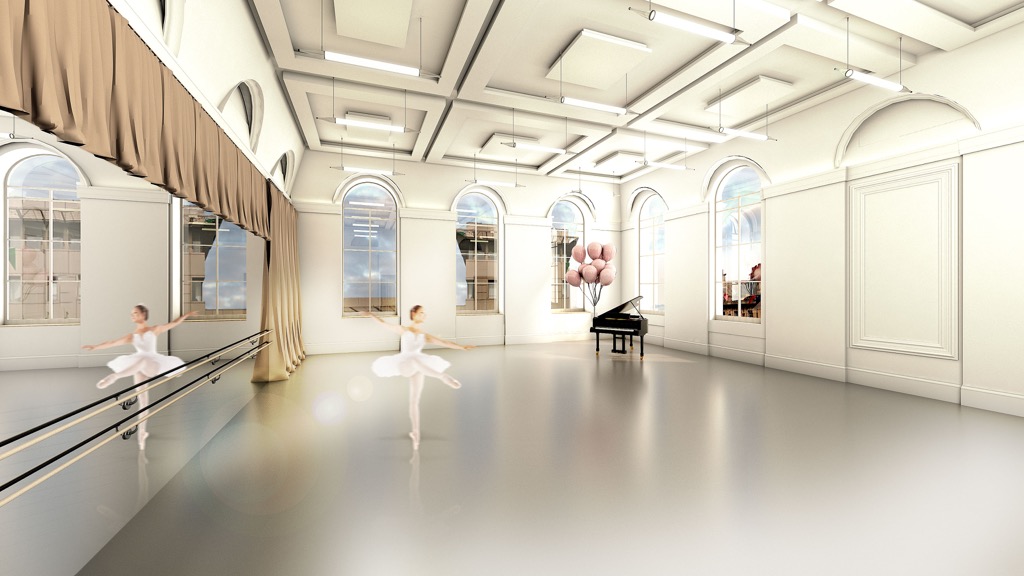 – entirely new rooms created inside the current building – including a new café-bar and dance studio built in currently-unused space. There will also be a smaller venue-within-a-venue – meaning more use, more footfall, and a better range of community events;

– transformed audience experience including lowered stage, new seating, better sightlines and acoustics, new reception area, and much improved access to and around the building;

– an entire replacement of the building’s decades-old electrical and mechanical equipment, and improved backroom facilities allowing more weddings and conferences;

The council is taking forward the £22m work as part of a much-bigger investment in the town centre designed to change the area’s future using its internationally-significant cultural and heritage story.

That includes a transformation of Paisley Museum which will almost quadruple current visitor numbers, a new modern home for library services on the High Street, and major investment in key outdoor spaces such as Abbey Close and County Square to create places which will keep residents, students and visitors in the town for longer.

The building’s operators Renfrewshire Leisure have already been speaking to some of Scotland’s top music promoters about using the venue when it reopens. 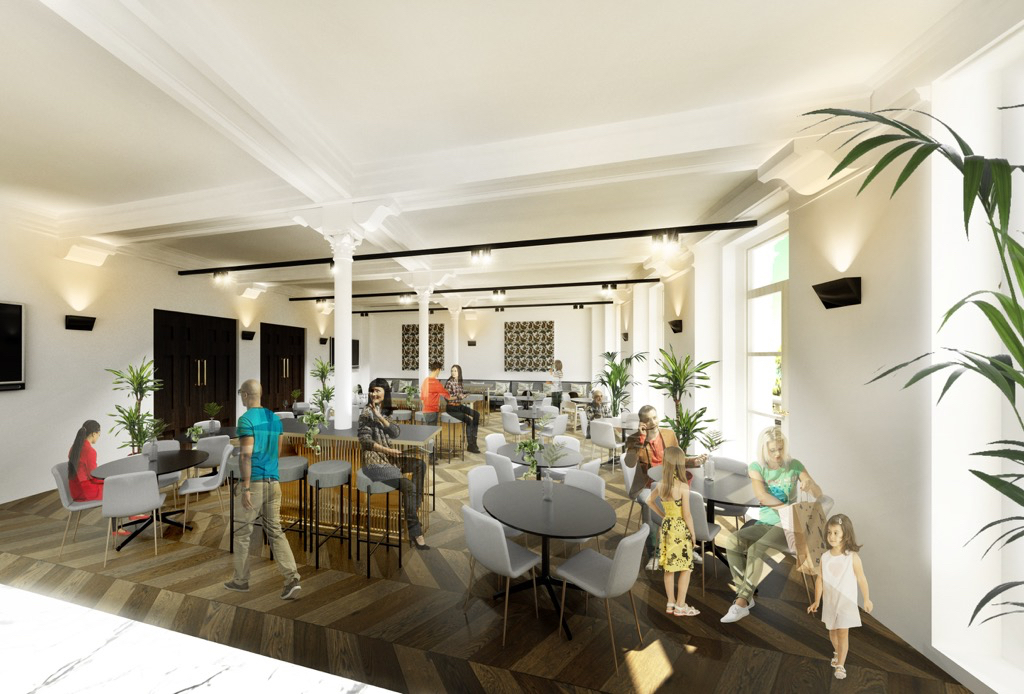 Mark Mackie, of Regular Music – who has worked with some of the industry’s biggest names as the man behind massive gigs including the Castle Concerts at Edinburgh Castle and Summer Nights at Glasgow’s Kelvingrove Bandstand, said: “As a Paisley buddy myself, I’m really excited about the transformation of Paisley Town Hall.

“This investment is great news for gig-goers in the west of Scotland and it’s definitely a venue Regular Music would look to bring bands to. The new facilities, refurbished auditorium and café-bar will make it a must-visit venue for bands and audiences.”

Councillor Lisa-Marie Hughes, chair of Renfrewshire Leisure, said: “Paisley Town Hall is a much-loved building which has been at the heart of life in the town for generations – but to keep it there the interior of this beautiful building needs the revamp now being delivered.

“The council is making a substantial investment – not just to do the necessary maintenance to keep the building viable, but to take what it can do to a totally new level.

“As a result, the revamp is predicted to double the number of people who use it each year – bringing new life to the town centre and helping anchor our ongoing wider work to use our outstanding cultural and heritage story to bring new visitors to the area.

“It also means creating a facility in which people will be able to experience world-class culture on their own doorstep, with all the opportunities that means to make people’s lives better.

“And while the renovation is happening we will be making sure everybody knows Paisley continues to remain open for business.”

The building is being redesigned by award-winning architects Holmes Miller, whose previous projects include the redevelopment of Old Trafford and reshaping Hampden for the Glasgow 2014 Commonwealth Games.

The town hall revamp is being run by Renfrewshire Council in partnership with Hub West Scotland – a Scottish-Government-backed firm who help public-sector bodies get value for money when investing in large infrastructure projects.

The council worked with Homes Miller and Hub West Scotland on the new Johnstone Town Hall –which has won a string of industry awards since it opened in 2015.

Initial work to clear out the building is already under way, with stonework and roof repairs taking place over the summer, ahead of main construction work starting towards the end of the year. The building is due to reopen in late 2021.