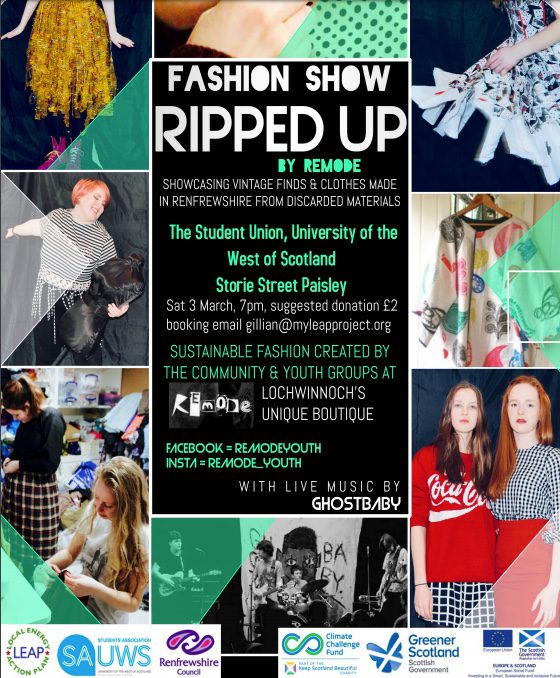 RIPPED UP by ReMode

A group of Renfrewshire teenagers will be hitting the catwalk this spring with a very different look. The models walking the runway at fashion show Ripped Up by ReMode will all be wearing clothes they’ve re-made from discarded fabric, whether donated or rescued from landfill sites.

Ripped Up by ReMode is the culmination of a year’s work at Lochwinnoch-based community project and upcycled fashion boutique ReMode, which offers free workshops in upcycling and clothing design for young people and the wider Renfrewshire community. All of the weird, wonderful and at times out-of-this-world clothes on show have been constructed from discarded donations by young people and participants from the community, working with experienced designers, artists and industry professionals. The models will also showcase a line of unique Paisley-patterned kimonos created as part of a Renfrewshire Council-funded project called Our Pattern.

Gillian Steel, the artist and filmmaker who runs ReMode in Lochwinnoch, said

“ReMode exists to raise awareness of the huge environmental problems posed by the textile industry – currently the second most toxic in the world after oil – and to encourage young people and the community look at ways in which fashion can be more sustainable.  The greatest resource we’ve drawn on in creating this collection has not been the reams of fabric and discarded clothing we’ve had donated, but the imagination, skills and willingness of people in our community to create see the potential and beauty in something that has been discarded.”

Cllr Iain Nicolson, Renfrewshire Council leader, added: “We are pleased to be able to support this project through Renfrewshire’s Culture, Heritage and Events Fund. The fund is part of the legacy of Paisley’s bid to be UK City of Culture 2021 and aims to carry on the momentum it created by building capacity among the local creative community, and new opportunities for people to get involved in cultural activity. The team at ReMode are raising awareness of important environmental issues in a very creative way and we wish them all the very best with the fashion show.”

Ripped Up by ReMode has been developed in collaboration with Paisley 2021’s UK City of Culture and Heritage Fund and The University of The West of Scotland’s Sustainability Hub.