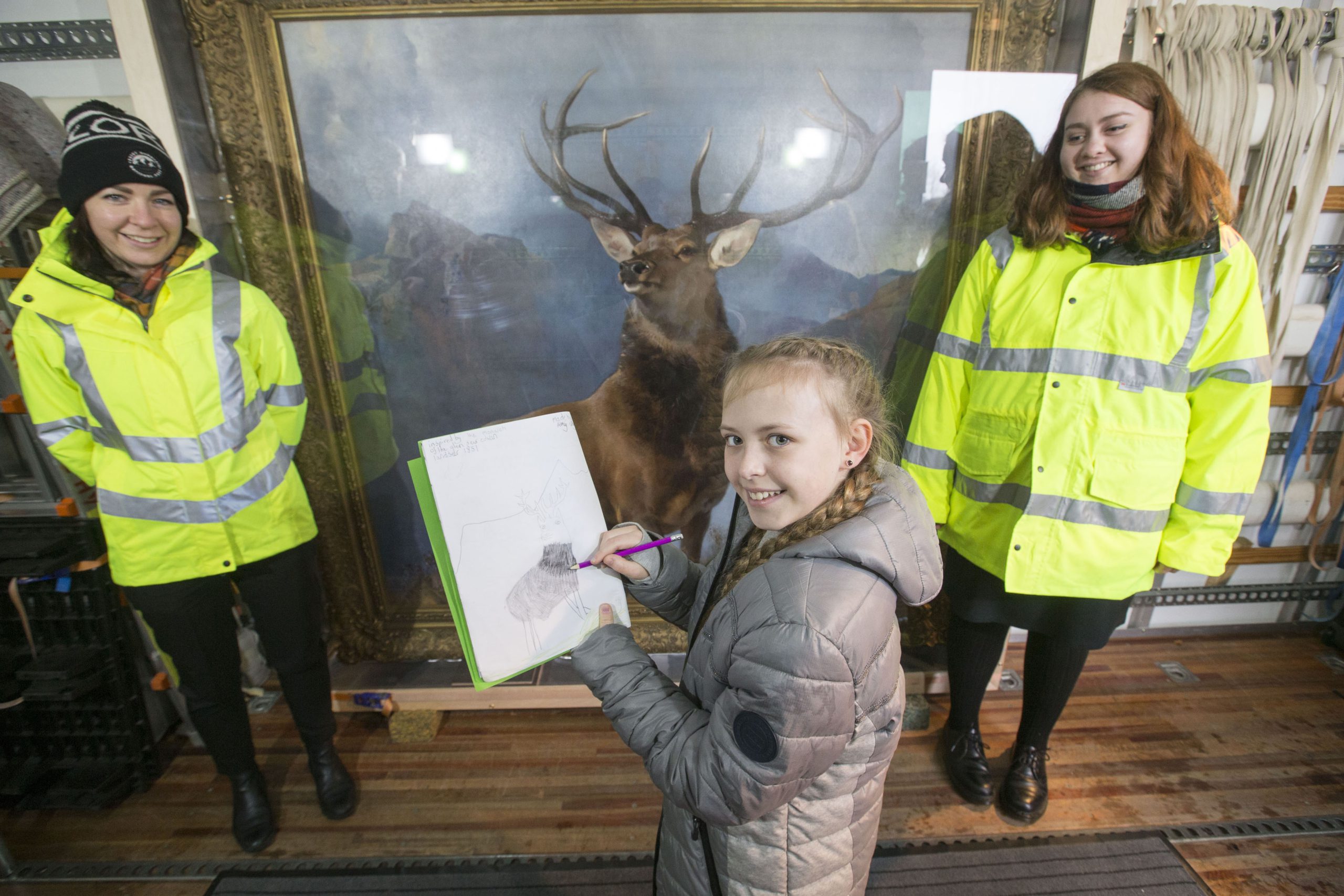 ONE of Scotland’s most iconic paintings has been taken to a primary school so youngsters could get a close-up view of the artwork.

Shortly before The Monarch of the Glen (c.1851) by Sir Edwin Landseer went on display at Paisley Museum, Primary Six and Seven pupils at Arkleston Primary, in Renfrew got a sneak preview of the painting and spoke about it with staff from the National Galleries of Scotland. 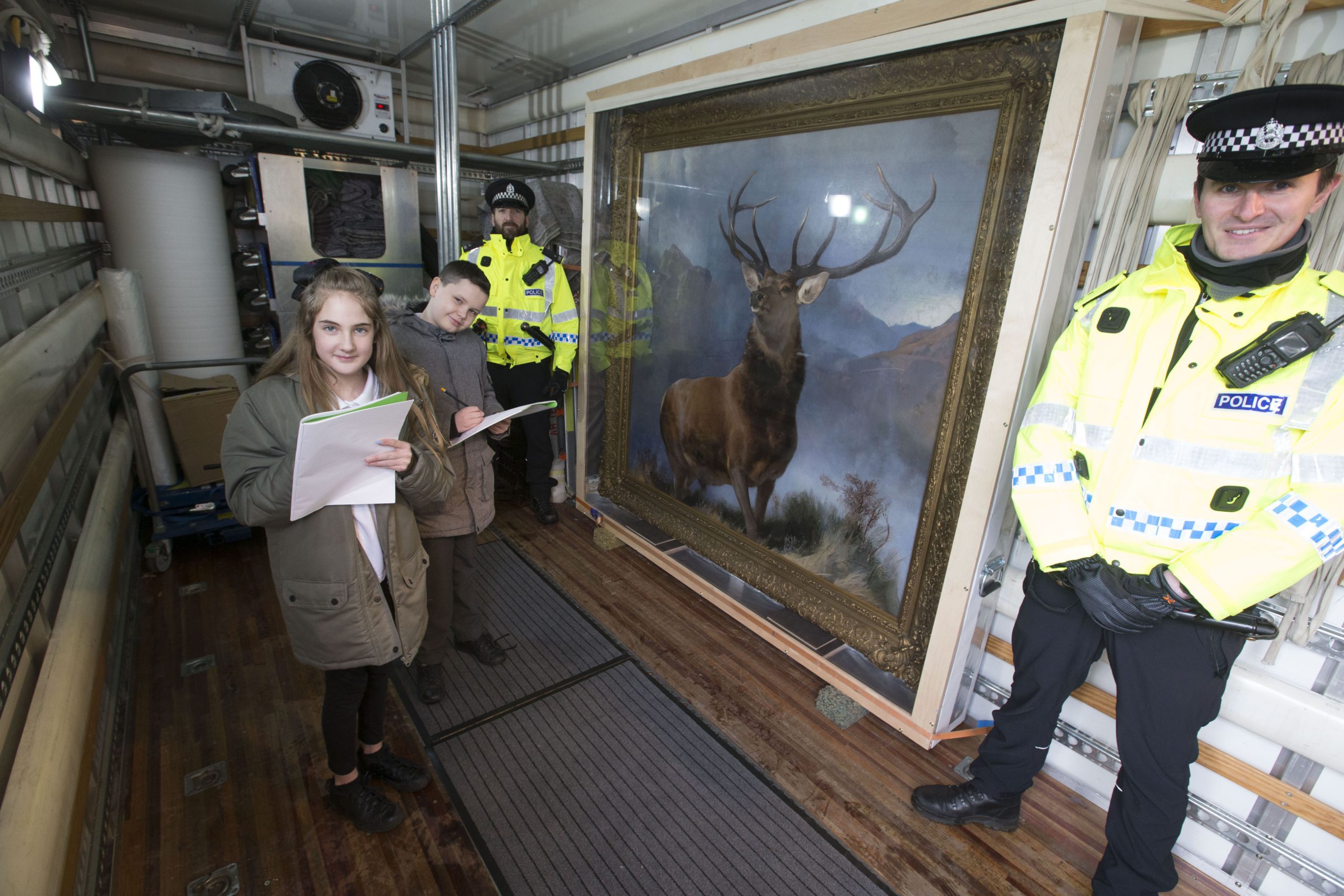 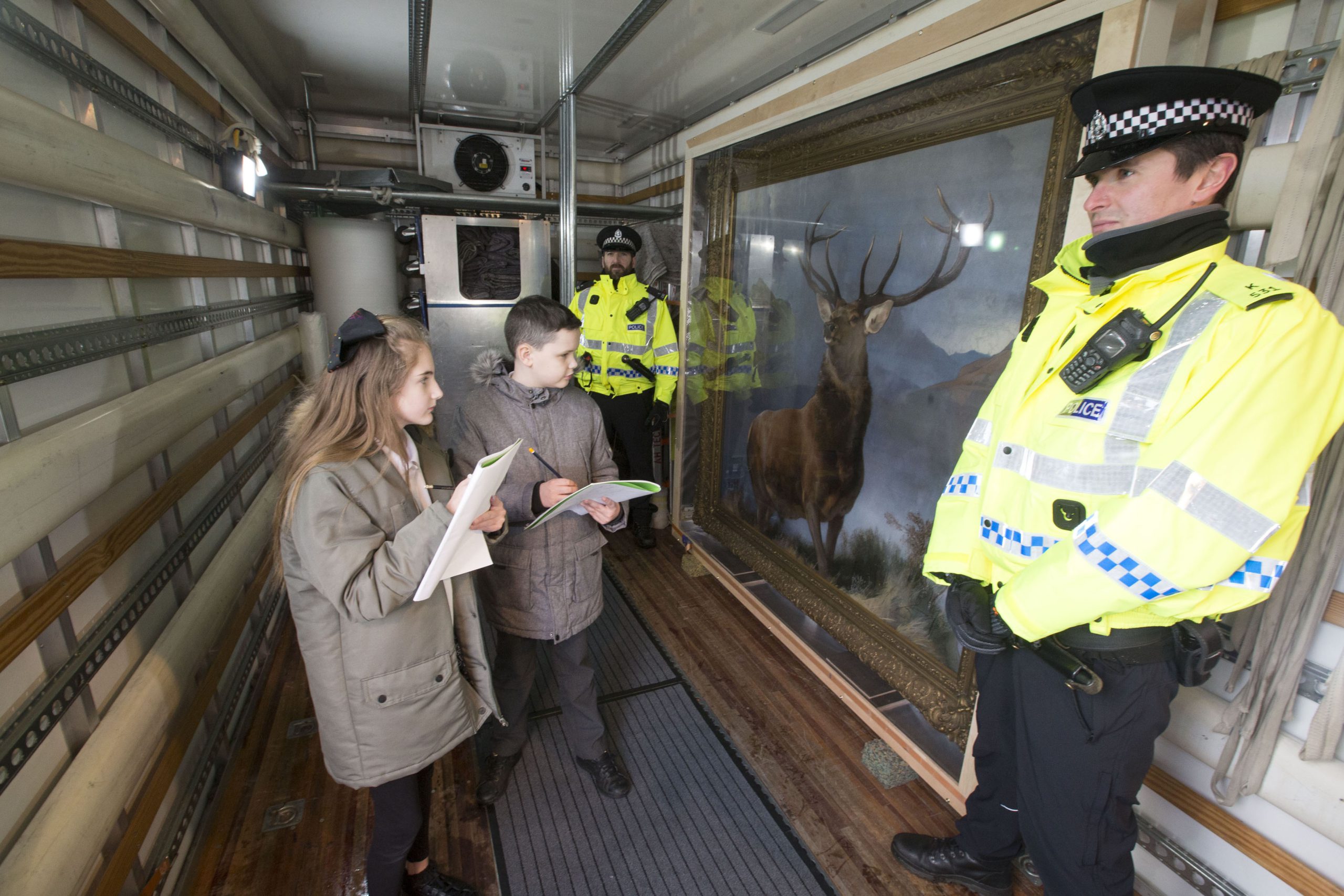 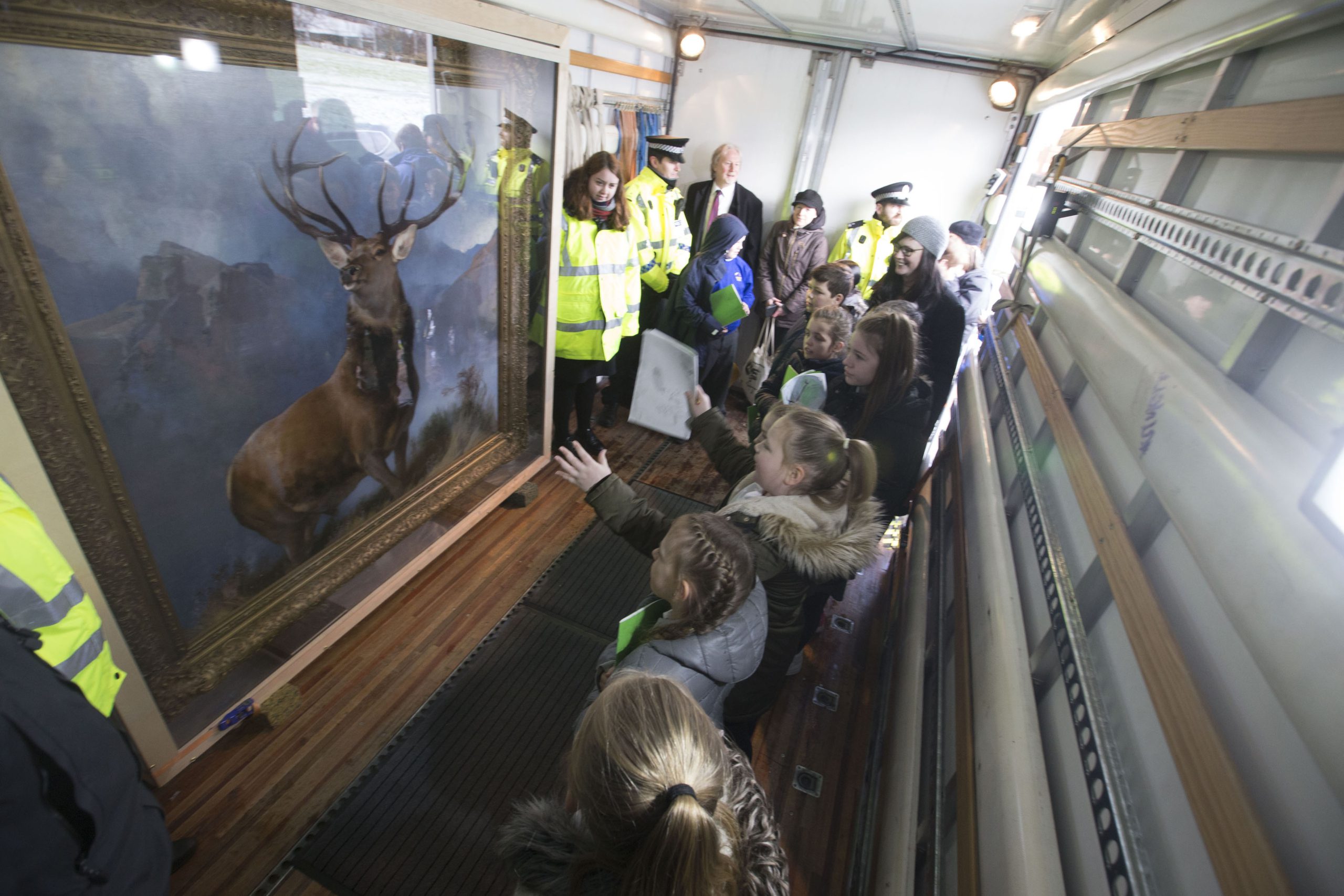 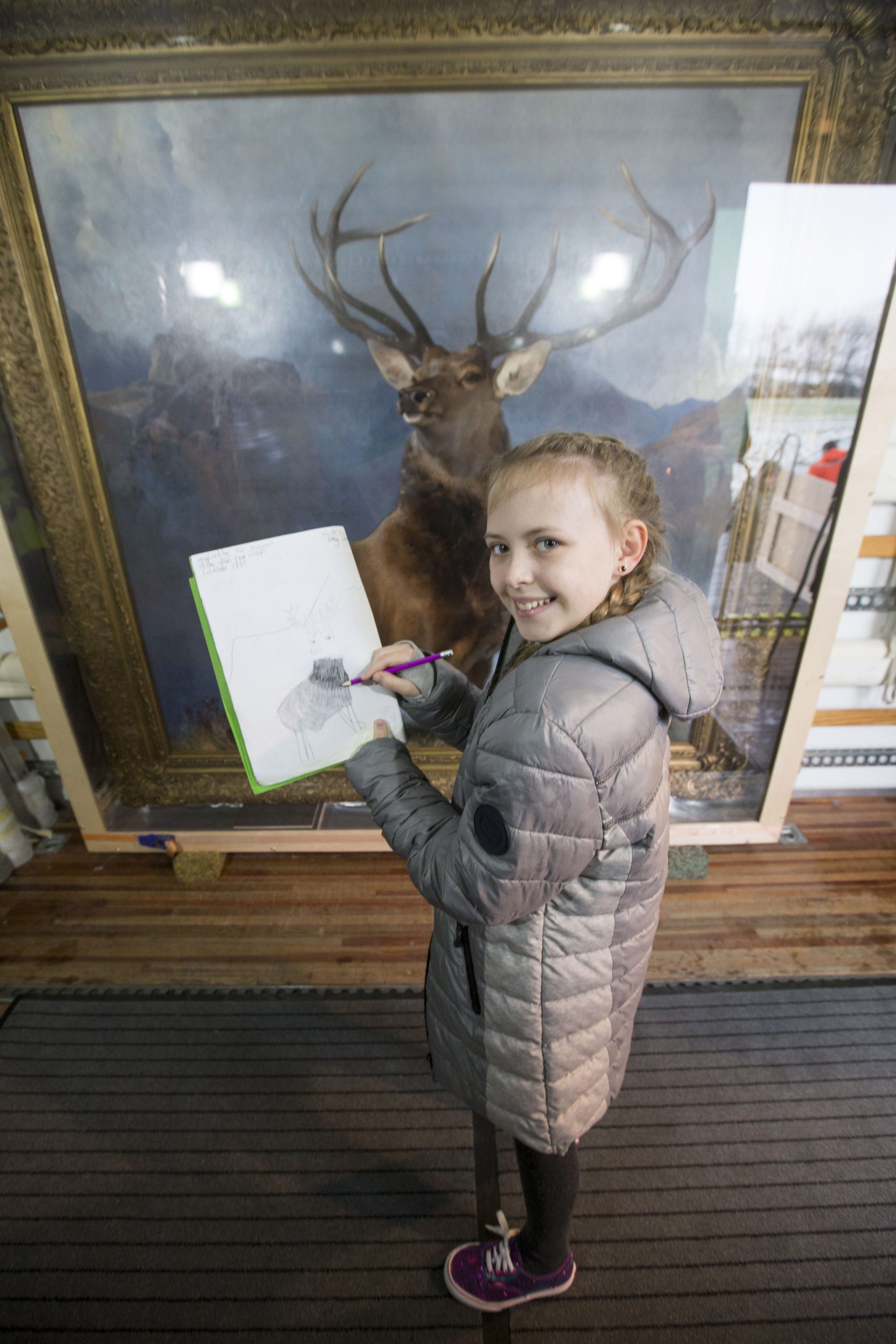 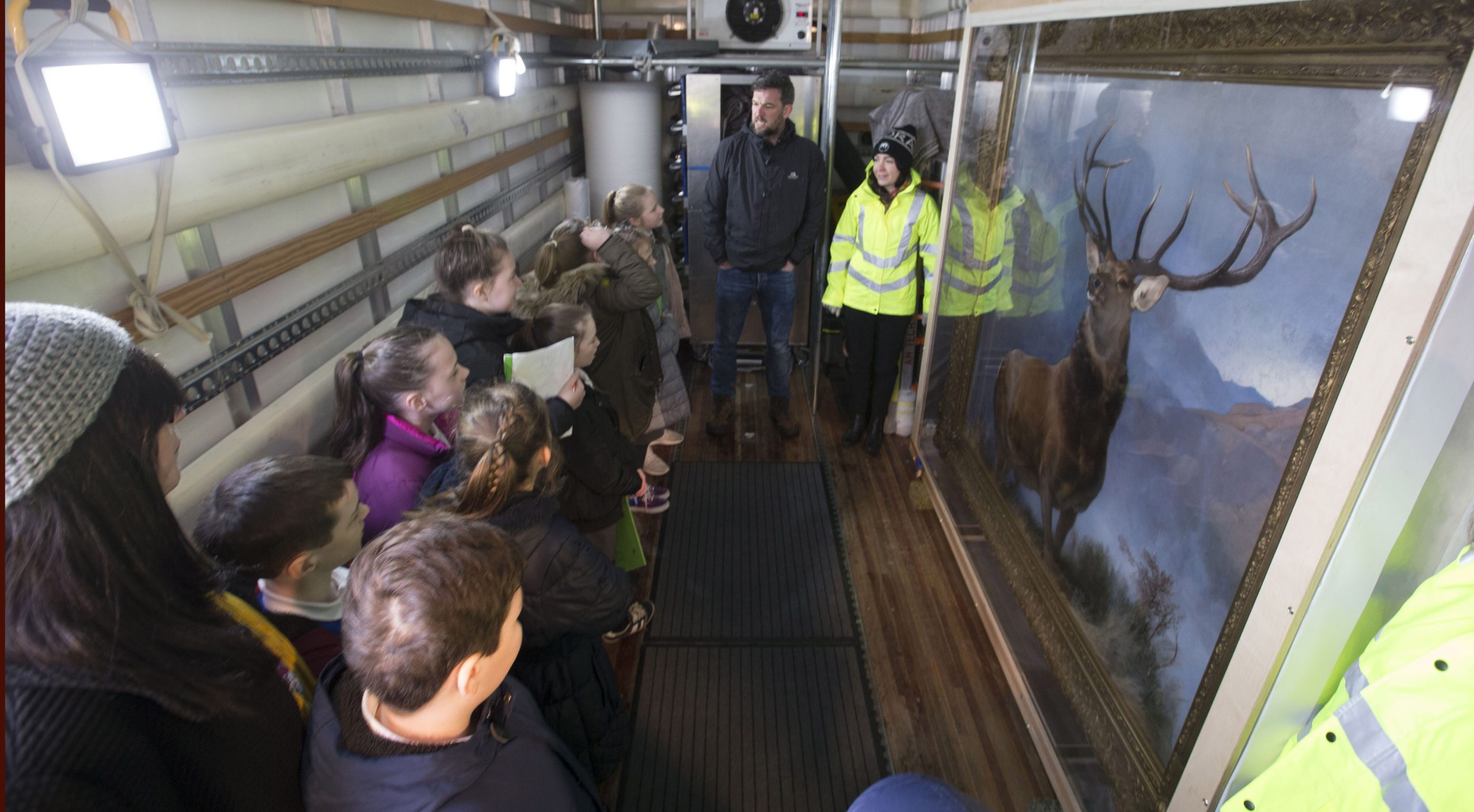 The painting was brought to the school in a large van, which parked in the playground. Local police officers and other security staff were on hand to look after the valuable piece of art.

The painting was bought for the nation for £4 million from drinks giant Diageo last year, after a four-month fundraising campaign supported by the National Lottery, Art Fund, the Scottish Government, private trusts and public donations. Diageo had agreed to sell the famous painting for half the market value.

The painting is an iconic image associated with Scotland and Paisley is only one of four venues in the country chosen by the National Galleries of Scotland for it to go on show. People can view The Monarch of the Glen for free at Paisley Museum from until March 11.

Carolyn Crawford, head teacher at Arkleston Primary said: “We were lucky enough to be part of a very unique experience, when The Monarch of the Glen came to visit us.

“It was an honour and an experience I’m sure the children and adults will not forget.

“Pupils were impressed with the painting and even a little overwhelmed by the stature of the stag and this prompted some great discussion.

“We emphasise the importance of being creative at Arkleston and it’s one of the character strengths that we teach our children.

“Being creative allows you to see things differently, a skill which we hope all our children will put to good use in their lives.”

Joyce McKellar, chief executive of Renfrewshire Leisure, who operates Paisley Museum, said: “It was a great idea to take the painting to a local school so pupils could see such an iconic painting close up and then discus what it means to them.

“Now everyone can see the Monarch of the Glen, at Paisley Museum and it’s a great coup for Paisley to have been chosen as one of four places in Scotland to display the impressive painting.”

Glasgow News? Daily Updates part of our network
It’ll be all in a day’s work for Renfrewshire’s Provost

Travelling in Africa
Scroll to top