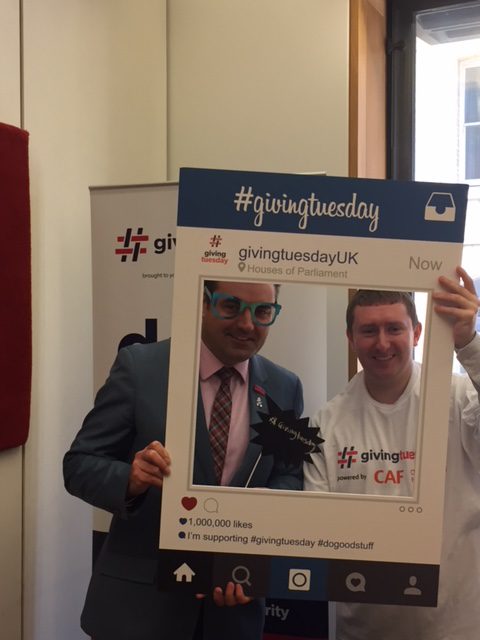 #givingtuesday is the global day of giving that follows Black Friday and Cyber Monday, as a day to give back. Gavin Newlands, MP for Paisley and Renfrewshire North, was in Parliament to celebrate the great things that are achieved by charities every day. This is the fourth year #givingtuesday, a campaign which encourages people to ‘do good stuff’ for charity, has taken place in the UK. Over 2,000 charities and businesses have signed up as partners in the campaign including Cancer Research UK, The Big Give, Royal Bank of Scotland, Morrisons, Sainsbury’s, the Co-Op and Radley.

Last year, #givingtuesday broke a Guinness World Record for the most online donations in 24 hours as people gave $48 million to good causes globally, with the UK being the second largest contributor. #Givingtuesday now runs in over 70 countries including the US, Canada, Germany, Spain, Singapore, Australia, Tanzania, Russia and Ireland.

It is led in the UK by the Charities Aid Foundation, one of Europe’s largest charitable foundations which supports charities in managing their money and helps people and businesses give to good causes.  The strapline for the campaign is ‘do good stuff’, encouraging people to do anything from donating money, volunteering, or simple acts of kindness that have huge impact.

“I am delighted to support #givingtuesday, supporting my local charities and I encourage all my constituents to get involved to do good. #givingtuesday is a great event and an exciting opportunity for charities and businesses in Renfrewshire to showcase the work they do all year round.”

“#givingtuesday is a day all about giving back, and we’re delighted to have Gavin Newlands MP on board.

“The UK is one of the most generous countries in the world, and we at CAF are proud to run this campaign here – it’s a fantastic opportunity to showcase all the great things that people and businesses are doing for charity.”