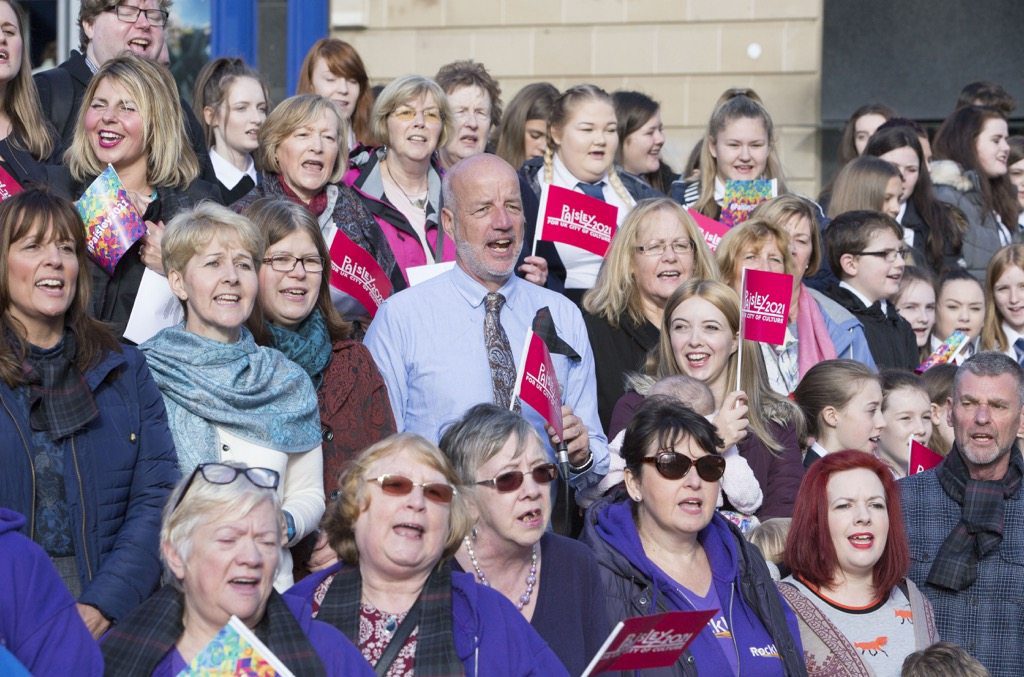 As Paisley’s bid to be the first Scottish winner of the UK City of Culture title was given an emotional send-off on Friday, those who took part have been issued with a huge thank you for their support. A large crowd joined local singing star Carol Laula and more than 150 other singers from eight local choirs to mark the bid submission at Paisley Cross for a moving rendition of Wild Mountain Thyme. The song is based on a work by Paisley weaver poet Robert Tannahill.

Last Friday was the deadline for Paisley to submit its second-stage UK City of Culture 2021 bid to the UK Government’s Department for Digital, Culture, Media and Sport.

The Renfrewshire town is the only Scottish place to make the final shortlist – alongside Coventry, Stoke, Sunderland and Swansea – with the winner to be announced in December.

Paisley 2021 Bid Director Jean Cameron said: “I want to say a huge heart felt ‘thank you’ to every single person who was involved, whether you were from one of our local schools, performing as part of a choir, helping to stage the show, or whether you turned out to wave the bid off.

“We couldn’t have done it without you and we’re very grateful to have your support.

“The community has got behind the bid right from the start and to see so many people come and see it off on Friday was fantastic.

“It was wonderful to hear pupils from so many local schools in fine voice, and joined by other groups of all ages.

“It shone a light on the talent in the town and also the contribution Paisley has made to the world.

“The benefits of winning the title would extend not just throughout Paisley and Renfrewshire, but nationwide.”

Later that night a string of iconic landmarks across Scotland including Glasgow University, Edinburgh Castle and Dundee’s Caird Hall lit up in Paisley 2021 colours in support of the bid.

Relive all the action from Friday’s mass musical send off here: https://www.facebook.com/paisley2021/