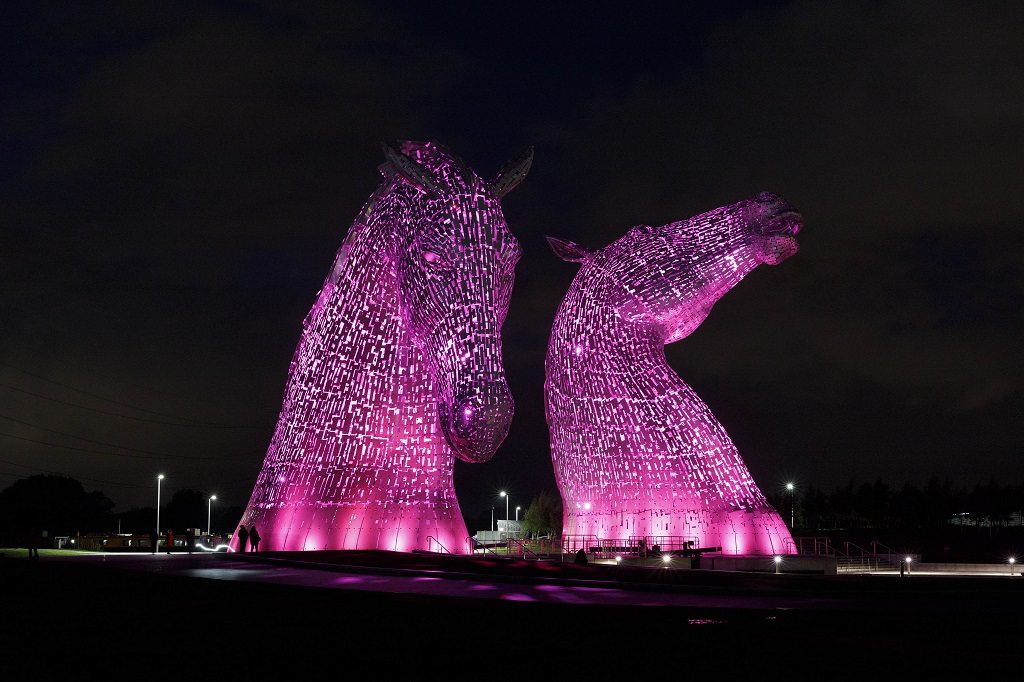 Scotland showed its support for Paisley’s bid to be UK City of Culture 2021 as the nation’s most iconic landmarks lit up in Paisley 2021 colours to celebrate the bid being lodged.

Friday was the deadline for Paisley to submit its second-stage UK City of Culture 2021 bid to the UK Government’s Department for Digital, Culture, Media and Sport.

Iconic landmarks across the country lit up in the Paisley 2021 signature red to show their support and mark the occasion. Participating venues included Edinburgh Castle, The Kelpies, University of Glasgow, Dundee’s Caird Hall and Paisley’s own Town Hall.

Edinburgh Castle lights up for Paisley 2021 for UK City of Culture.
Picture by Stewart Attwood
All images © Stewart Attwood Photography 2017. All other rights are reserved. Use in any other context is expressly prohibited without prior permission. No Syndication Permitted.

The Renfrewshire town is the only Scottish location to make the final shortlist and the only town to get this far. Paisley’s bid will be considered alongside Coventry, Stoke, Sunderland and Swansea – with the winner to be announced in December.

The bid is part of a wider drive to transform Paisley’s future using its internationally-significant heritage and cultural story – and the send-off follows a massive £45.7m town centre investment package approved by Renfrewshire Council earlier in the week which will prepare the town to host the 2021 title.

The investment includes a £22m modernisation of Paisley’s iconic 19th-century town hall, £10m of public realm and transport improvements in Paisley town centre, £7.7m to upgrade St James Playing Fields to make it suitable for large outdoor events, a £2.5m upgrade to Paisley Arts Centre, and £3.5m to turn the disused Galbraiths warehouse in Back Sneddon Street into a new performance and visual arts space.

The bid send-off moment is the latest piece of good news to come out of the town this week as it was also confirmed earlier this week that Paisley Museum is in line for a £4.9m Heritage Lottery Fund grant.

Paisley 2021 bid director Jean Cameron added:  “As Scotland’s bid it’s fantastic to see the whole country get behind us and celebrate this significant point in our UK City of Culture 2021 journey. There has never been a Scottish winner but we would love to be the first – the whole country agrees that this – as Gerry Rafferty said – is ‘the right moment’ for Paisley.

“The benefits of winning the title will be felt nationwide, both in terms of visitors and economic impact, and will be instrumental in reinforcing the diversity and ambition of what Scotland’s cultural scene has to offer.

“Our bid has been shaped by the voices of Paisley and our hometown send off moment was a spine-tingling way of bringing that to life – the sight and sound of everyone joining together as one was an emotional, amazing moment, and one that will stay with me forever.”

Nick Finnigan, Executive Manager at Edinburgh Castle said: “We’re delighted to play our part in supporting Paisley’s bid. It would be unprecedented for a town in Scotland to be successful in securing the City of Culture mantle and we wish Paisley every success.”

It is estimated that Paisley’s 2021 year could bring a £176m economic boost and create the equivalent of 4,700 jobs over a ten-year period while attracting more than 800,000 visitors during the host year.

Current UK City of Culture hosts Hull have seen £1 billion of investment since winning the title in 2013, with the city attracting 1.4m visitors in just the first three months of its year in the spotlight.

Glasgow News? Daily Updates part of our network
How to Prepare for a Decorating Project