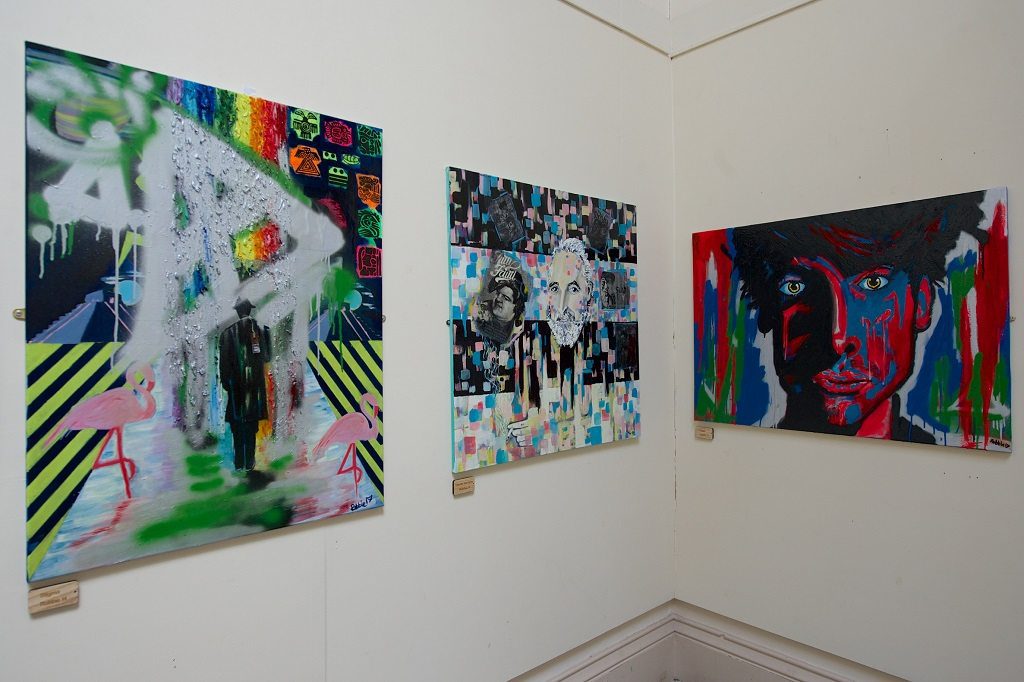 Prisoners at one of Scotland’s jails have created an exhibition of creative artwork inspired by Paisley – now on display in the town’s museum.

The programme was run by the Learning Centre at the prison, who each year work with Glasgow School of Art on a residency aimed at helping the prisoners turn their lives around by using creativity to express themselves.

As many of HMP Low Moss’s inmates are from the Paisley area, this year’s event was themed around the town – with input from the team behind Paisley’s bid to be UK City of Culture 2021.

It saw a series of workshops inspired by Paisley’s story, including a demonstration of traditional weaving skills, and a songwriting masterclass run by the University of the West of Scotland.

End products include striking paintings of famous Buddies Paolo Nutini and John Byrne, and artwork depicting local features such as Paisley Town Hall, the Paisley Pattern…and even the logo of the Paisley Pirates ice hockey team.

The free-to-visit exhibition was curated by staff at Paisley Museum – who also worked with the prisoners – and runs from this week until October.

The programme was run by Ruth Facchini, learning manager at HMP Low Moss, who said: “To make our society safer, it pays to channel offenders’ energies to positive ends, build their self-worth and help them learn new skills.

“The arts are an especially effective way of engaging with offenders who feel alienated from mainstream education and employment, and there is growing evidence they are effective in turning around offenders’ lives.

“I have already had amazing feedback from people who have viewed the exhibition and our guys who produced it could not be more thrilled to have their work recognised and appreciated.

“They feel valued and that they have contributed something really positive to their community.

“We in HMP Low Moss are firmly behind Paisley’s bid to become UK City of Culture 2021. The town needs regeneration and an economic boost, and our learners – who know more than most about deprivation and lack of opportunity – recognise what a winning bid might bring to Paisley.”

Margaret Scott, Development Manager in the Paisley 2021 bid team, said: “We were delighted to be able to work with the staff and prisoners at HMP Low Moss on this hugely worthwhile project.

“We know involvement in culture makes people’s lives better – one of the key themes of Paisley’s bid to be UK City of Culture 2021 is in making those benefits available to every segment of our community.

“This exhibition shows us putting that into practice – by reaching members of society most in need of a change of direction and, through the power of culture, helping equip them to do that.

“It’s also a great example of partnership in action – with staff from the Scottish Prison Service, the 2021 bid team, Renfrewshire Leisure and the prison charity the Koestler Trust – all playing a part.

“The quality of the artwork is fantastic and really tells the town’s story – I would encourage the public to get along and check out the exhibition for themselves.”

Paisley is bidding for the prestigious title as part of a wider push to transform the town’s future using the power of its internationally-significant heritage and cultural story.

Earlier this month, Paisley was confirmed by the UK Government’s Department for Digital, Culture, Media and Sport as the only Scottish place on the final shortlist – which also features Coventry, Stoke, Sunderland and Swansea.