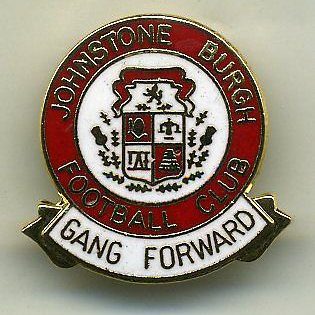 Johnstone Burgh have launched an urgent appeal for sponsors and volunteers to help keep the historical club going. The Keanie Park side have had it tough in recent years both on and off the field with the sides recent relegation to the bottom tier of junior football being the latest blow.

The club now find themselves without vital sponsorships and a dwindling committee of just three elderly men.

Life-long Burgh fan and club secretary Ricky Cantwell says the prospect of Burgh closing their doors for good is a very real one.

He said: “We urgently need to get young people involved with the club as there are only three of us on the committee and we’re all getting on, we can’t run the club on our own anymore.

“It’s vital that we get new committee members as soon as possible, that is the main issue as without a proper committee running the club the future looks bleak.

He added: “Money is also a big issue for us, we incur costs every year with the rent of the ground but we also have to carry out our own maintenance work and that’s not cheap.

Johnstone Burgh were formed in 1956 and have had great success over the years with their greatest achievements coming in the 60s when they won the Scottish Junior Cup twice, once in 1964 and again in 1968.

The club’s most recent success came during the 2014/15 season when they were promoted from the Central District Second Division, however, they have since been relegated back down.

One Johnstone Burgh player who knows what it’s like to watch a club fold around him is long time Burgh goalkeeper Fraser Wilson.

Fraser was at Stranraer Athletic during their dying days and says he would hate to see the same thing happen to Johnstone Burgh.

He said: “It’s always worrying when you hear things like this, my last club, Stranraer Athletic went to the wall because they had lost their committee.

“The Burgh is a famous name in junior football and it would be soul destroying to see the club disappear.

“Young blood on the committee is every bit as important as on the pitch, probably more so.

“For a town the size of Johnstone not to have a junior club would be unthinkable, hopefully the situation can be sorted.”

A JustGiving page has been set up by Andrew Cantwell, nephew of committee member Ricky, to help raise funds for the club.

If you want to get involved with the club, whether it’s as a sponsor, committee member or as a volunteer then please contact Ricky Cantwell on 07719323744.