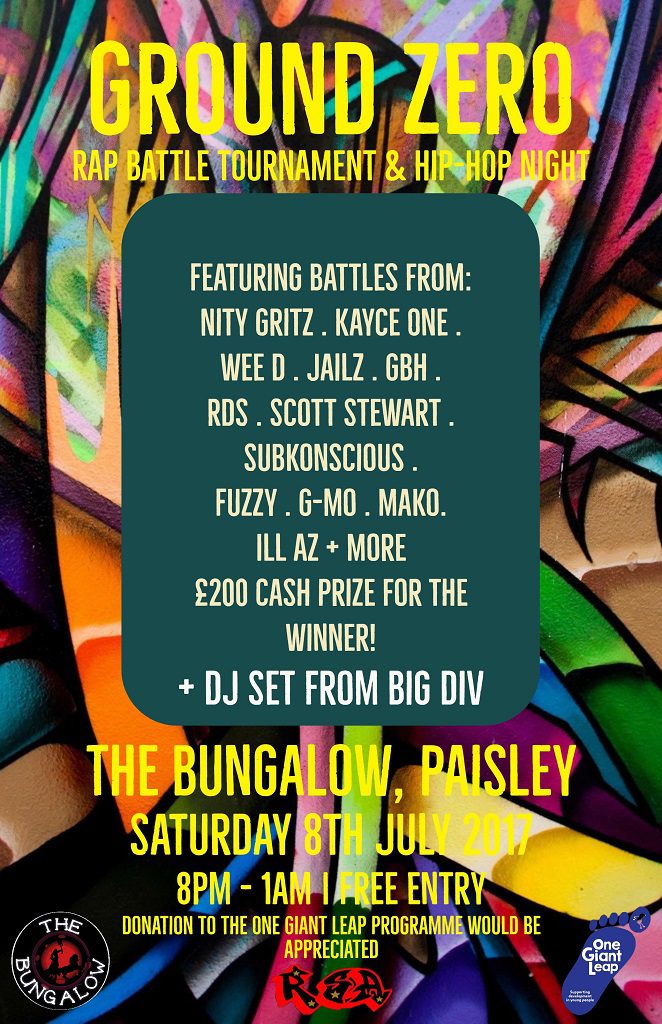 Paisley’s independent live music venue The Bungalow and popular town centre community convenience store RSA (owned by Rehman Afzal otherwise known as Rekz) along-side organiser Darren Scott have teamed up to present GROUND ZERO a new music event dedicated to Rap and Hip-Hop on Saturday 8th July 2017 in The Bungalow on Shuttle Street, Paisley from 8pm.
Crowds can expect to witness rap battles between 12 different MCs through-out the night and the winner being presented with a £200.00 cash prize! Local DJ ‘Big Div’ will be launching sounds all night long with more additions to the night due to be announced over the coming weeks with beatboxers also welcome to take to the stage.

Organiser ‘Rekz’ said: “I have always been interested in expressive music such as Hip Hip/Rap. The Scottish scene in comparison to the English scene has been lacking in the mainstream. Paisley is an integral musical hub in Scotland it would only be fitting for the Scottish Hip Hop/Rap talents to take centre stage in the Bungalow Paisley, which will no doubt create noise and inspire people through it. Paisley having had turbulent times socially, music such as this can unite people and in many occasions be helpful to the mind and soul.”

Want to get involved? Email Emma MacKenzie on thebungalowonline@outlook.com or drop a message to The
Bungalow Facebook Page.

Glasgow News? Daily Updates part of our network
Key sources you should refer to for help with your essay writing