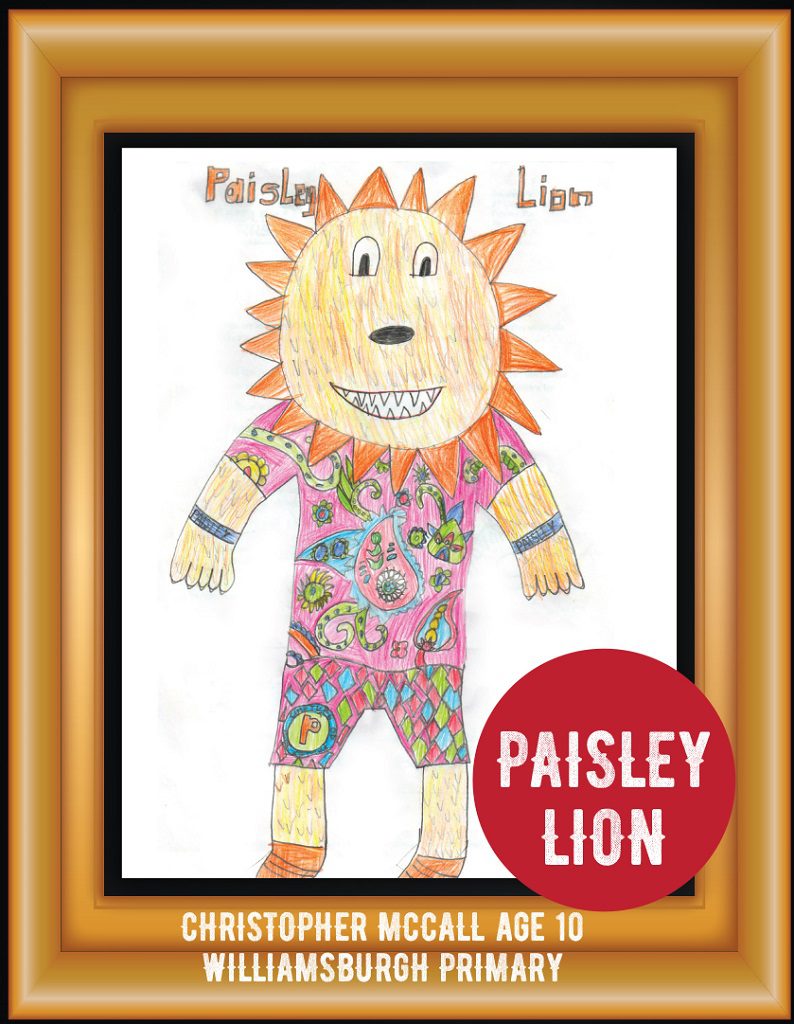 The winner of the new Paisley First Mascot Design Competition has been revealed as ten year old Christopher McCall with his design…Paisley Lion!

Christopher, a primary six pupil from Williamsburgh Primary School, impressed judges with his colourful creation which was picked from the final shortlist of ten entries.

Paisley First received hundreds of entries for the competition from school children all across Renfrewshire.

The new mascot will be used by Paisley First at events, performances and activities, all promoting Paisley town centre as a great place to live, work and visit.

Paisley First Chairman Ian Henderson and Paisley First BID Manager Andrew Mitchell made a surprise visit to Christopher and his school friends this week to announce he had won the competition and award him with his prize…see the video at www.paisleyfirst.com

“I am so happy,” said Christopher. “It took me about two days to create my design.”

“We had been talking in class with our teacher Miss Lennon about the lions which came to Paisley last year and then we started to talk about the Paisley pattern.”

“So I wanted my mascot to be about the lions and the Paisley pattern and I wanted my lion to be happy because Paisley is a happy place.”

Paisley First Chairman Ian Henderson agreed that these were all factors which helped Christopher’s entry stand out, saying: “All the entries were fantastic and it was a really difficult job to pick just one winner.”

“It was such a bright, colourful and happy picture and just had that positivity that we want to be associated with Paisley.”

Class teacher Miss Michaela Lennon, who helped the class with their entries to the competition, said: “I am not from Paisley so it was really interesting to talk to them about the town and its history.”

“They were all very excited when they were telling me about the Pride of Paisley so it’s clear the lions made a big impression on them all last year.”

Head teacher Nova Scott added; “The children all loved the lions last year and we have our very own school lion “Will.i.lion.”

“The children really enjoyed taking part in the mascot competition, it’s good to get them involved in what’s happening in the town.”

As well as being able to see his mascot design brought to life, Christopher received a £25.00 prize and as the winning school, Williamsburgh Primary School Parent Teacher Association also receives £200.00.

Paisley First Chairman Ian Henderson said:” It’s important to involve the children in all the positive projects we are working on to bring more people to the town centre.”

“This helps them take pride in their home town and this is why Christopher’s design made such a big impact on our judges.”

“We can’t wait to see Christopher’s design being brought to life and welcoming Paisley Lion to Paisley town centre in the near future.”

Paisley First would like to thank all the local school children, and their parents and teachers, who helped submit entries.