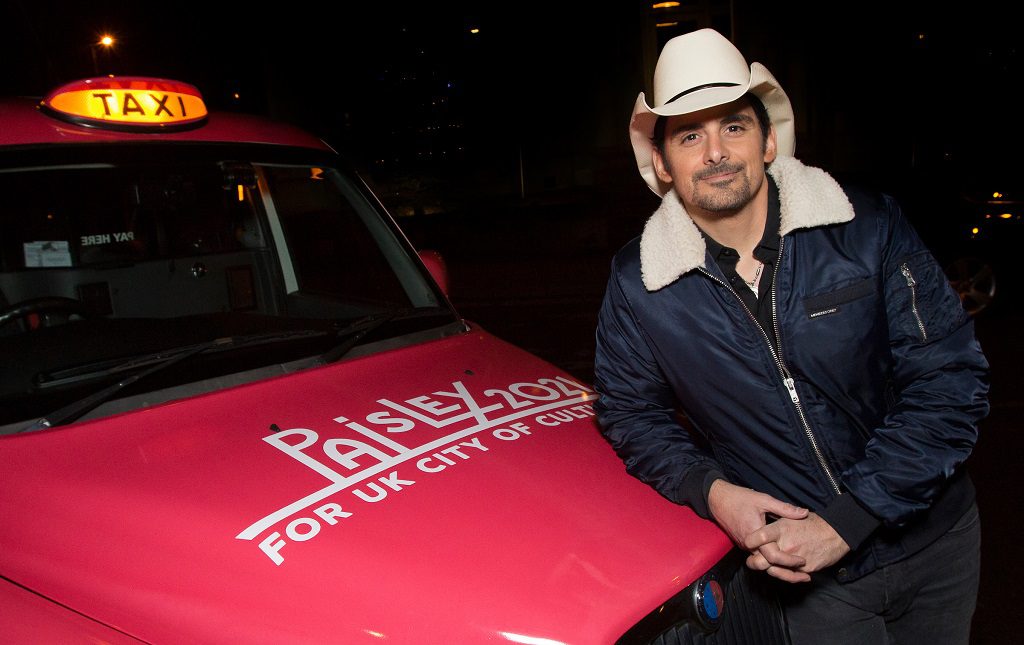 Paisley’s bid to be UK City of Culture 2021 has had support from the town’s superstar namesake…multi-million-selling US country artist Brad Paisley.

The Grammy-award-winning singer performed at Glasgow’s sold-out Clyde Auditorium last night as he headlined the annual Country2Country festival, which brings together some of the scene’s biggest names on one bill.

And Brad posed for pictures before the show with a specially-branded Paisley 2021 taxi, before being presented with a tie made from the Paisley tartan – produced by the town’s Houston Kiltmakers, one of the world’s top Highland dress stores.

On stage, he told the crowd he was proud of his Scottish roots and ‘to have a last name that hails from here’.

Tennessee-based Brad has sold 12 million albums around the world and has been a proud member of country music’s highest honour, the Grand Ole Opry, since 2001.

His 11th studio album, Love and War, is released next month and features collaborations with Mick Jagger and hip-hip producer Timbaland, as well as a song with lyrics written by the late Johnny Cash.

And there was another Paisley connection on the night, with Brad joined on the festival bill by homegrown singer-songwriter Michael Cassidy.

Paisley is bidding to be UK City of Culture 2021 as part of plans to use the town’s unique heritage and cultural story to help transform its future.

Paisley 2021 bid director Jean Cameron added: “The name Paisley was once carried around the globe by the Paisley Pattern – and Brad is still doing so to his millions of fans around the world today.

“We are delighted he has shown support for Paisley’s bid to be UK City of Culture 2021 – and he would be made more than welcome if he ever wants to come back and play a show here!”

Kids meet the Smurfs at shopping mall
Scroll to top