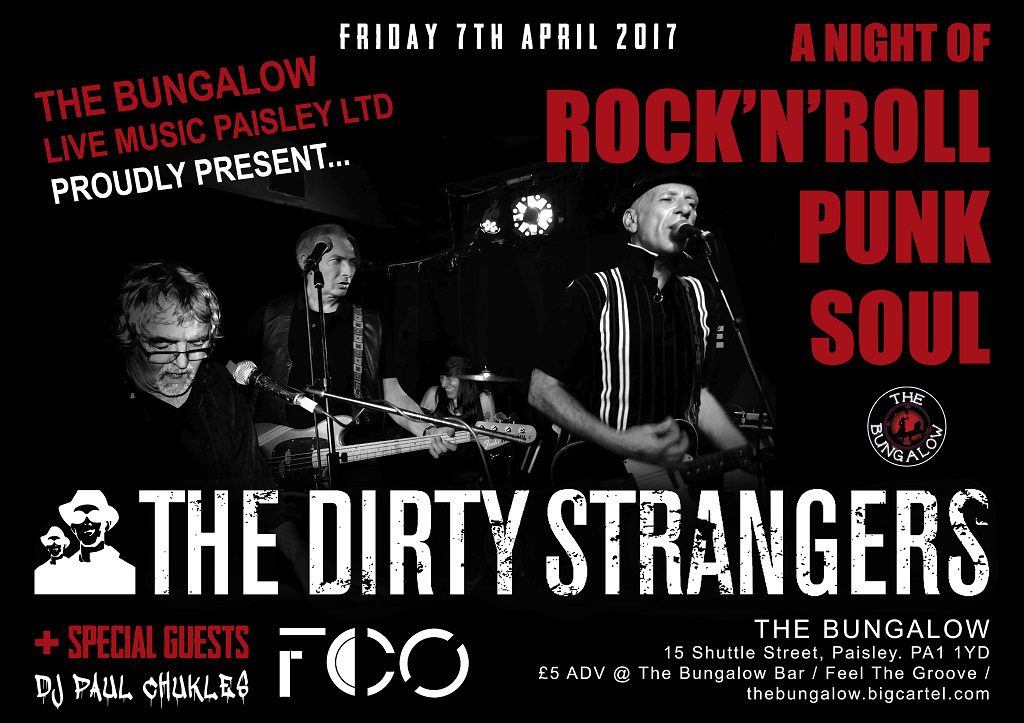 Paisley.org.uk’s very own Peter Greenwood interviewed Alan from The Dirty Strangers ahead of their upcoming gig at The Bungalow on 7th April.
The Dirty Strangers were born in the mid ’80s – led by singer, prime motivator and chief songwriter Alan Clayton.
Clayton has remained the band’s heart and soul ever since, being one of those rare stars whose profile is somehow inversely proportional to the respect granted him by others. The list of famous names who have worked alongside him is long and impressive.

In the early days of The Dirty Strangers he recruited both sometime Chuck Berry sideman ‘Scotty’ Mulvey to play keyboards (the Irishman is still in the band to this day) and guitarist Paul Fox (the man who made all that noise in the seminal punk outfit The Ruts, and who sadly passed away in 2007). When the self-titled Dirty Strangers debut album was released in 1987 it featured guest appearances from The Rolling Stones Keith Richards and Ronnie Wood, as well as contributions by Mickey Gallagher of Ian Dury And The Blockheads. Also featured were stunningly soulful vocals by Angie Brown – who would tour with the band and later see top 10 action as a member of dance legends Bizarre Inc and Motiv8.

When The Dirty Strangers released West 12 To Wittering (Another West Side Story) – album number three in 2009 – Clayton’s appeal hadn’t dimmed at all as Richards and Wood again chipped in on tracks alongside a third legendary guitar player, former The Damned man Brian James plus English rock’n’roll legend Joe Brown on banjo.

Away from the Dirties, in 2012, Clayton wrote and played alongside with 1960s and ’70s counter-culture icon John Sinclair – manager of Detroit’s legendary band the MC5 and founder member of the White Panthers party – when he came to the UK to make his Beatnik Youth album, produced by Killing Joke bassist Youth.

He also assembled an all-star cast as The D’Martinis to make Learnin’ The Blues – the debut album by his then 82-year-old father Johnny Clayton. Among their number were Keith Richards once again, Keith’s legendary saxophone buddy Bobby Keys, Tyla (Dogs D’Amour), Jim Jones (Jim Jones Revue), Gary Stonadge and Mallett (The Rotten Hill Gang), Dave Tregunna (Lords Of The New Church), Cliff Wright (Eat This), Barrie Cadogan (Little Barrie), the chanteuse Amy Nelson and his own son Paul Clayton. Clayton mixes such projects with an ongoing role in The Brian James Gang. If not quite a cast of thousands, added to the Dirty Strangers themselves Alan Clayton’s circle of talented friends is certainly a wide and varied set…

In 2016, he “went back to his day job” fronting The Dirty Strangers who released their fourth studio album Crime And A Woman. On it Clayton – having taken on all the band’s guitar duties – was backed by Mulvey and the no-nonsense rhythm section of John Proctor (bass) drummer George Butler.

Since recording the album, due to injury, George’s place in the band has been taken by new sticksman Danny Fury, ex-Lords Of The New Church and Vain. Then in December ’17 Proctor played his final show with the Dirties before flying out to New Zealand to join his old friend, the former AC/DC drummer Phil Rudd, for a world tour. Taking Big John’s place is Cliff Wright – a long-time associate of Clayton’s who even managed the band in its early days and has on his cv work as a guitar tech for Marc Bolan and David Bowie (he was there for the recording and first UK performance of Heroes…). And so the Dirty Strangers story continues…

Buy your tickets to see The Dirty Strangers Live in The Bungalow on Saturday 7th April at www.thebungalow.bigcartel.com or pop into The Bungalow bar or Feel The Groove

Glasgow News? Daily Updates part of our network
Events in the Hoose

Mum’s the word for TV host Jennifer
Scroll to top