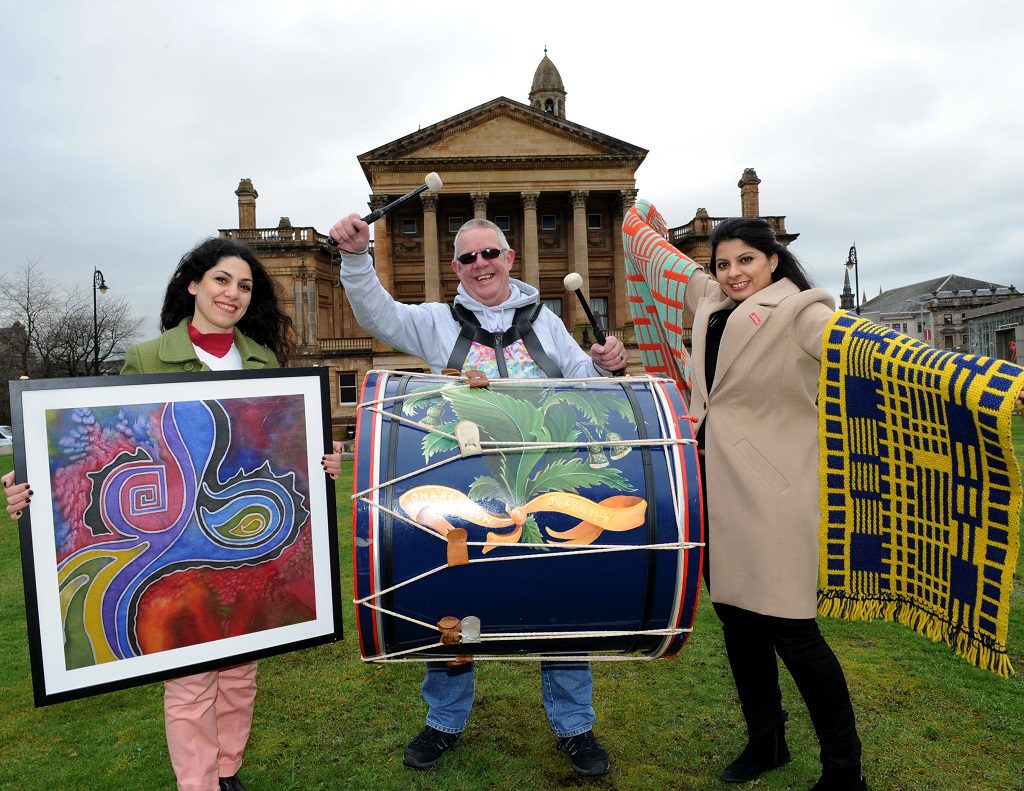 Paisley will host a weekend-long celebration of the town’s radical weaving heritage and international links – and is looking for artists to help tell that story to the world.

The town’s traditional Sma’ Shot Day celebration – one of the world’s oldest workers festivals – is this year joined by a two-day arts programme called Weave.

Weave – on Saturday 1 and Sunday 2 July – is one of Visit Scotland’s signature events for the country’s Year of Heritage, History and Archaeology 2017.

Part of Paisley’s UK City of Culture 2021 bid, the event will reconnect the town’s weaving heritage and global connections via a programme of music, design, art, poetry, dance and theatre, set against Paisley’s historic town centre.

As part of that, visual artists can apply for awards of £1,500 to create temporary public artworks in the town centre telling Paisley’s unique global textile story in new and innovative ways. For more info and an application form, email events@renfrewshire.gov.uk

Paisley 2021 bid director Jean Cameron said: “Sma’ Shot Day is a much-loved part of Paisley’s events calendar – and this year’s event will be bigger and better than ever with the addition of Weave.

“The weekend will combine the traditional family elements of Sma’ Shot Day with a two-day programme of top-class performers telling Paisley’s unique historic story as a global textile hub and centre of radical political thought.

“Through the public art commission we want visual artists and makers to help us tell that story in exciting, creative and original ways which can be enjoyed by all.

“The event will help show off everything Paisley has to offer as a key destination within Scotland for heritage tourism.”

Annique Armstrong, VisitScotland Regional Director, said: “2017 is the year to delve into the past and discover Scotland’s fascinating stories and unique experiences as part of the Year of History, Heritage and Archaeology celebrations.

“Scotland’s history and heritage is defined by its people, both past and present and is an integral & iconic part of our national identity.

“The wide-ranging programme for Weave will celebrate a wealth of exciting cultural heritage through music, poetry, dance, workshops, crafts and design, presenting a fantastic opportunity for visitors and locals to experience Paisley’s vibrant personality.”

A full Weave programme is still being developed and will be released later in the spring – but to publicise the call-out for participants, a Sma’Shot Day stalwart was joined by two artists already signed up to this year’s Weave bill.

Tony Lawler will this year mark his 25th year as the man banging the Charleston Drum at the head of the traditional Sma’ Shot parade through the town from Brodie Park to the festivities in Abbey Close on the Saturday afternoon.

He was joined at Paisley Abbey and Town Hall by Mariam Syed, who will give free drop-in demonstrations of traditional weaving skills on the looms at Paisley Museum.

Also involved in Weave is Iranian textiles artist Paria Goodarzi, who will exhibit work from her solo show Mass Movement, inspired by her journey to Scotland as a refugee, plus a joint show about identity and heritage with Indian photographer Arpita Singh called The Routes We Thread, both at Paisley Arts Centre.