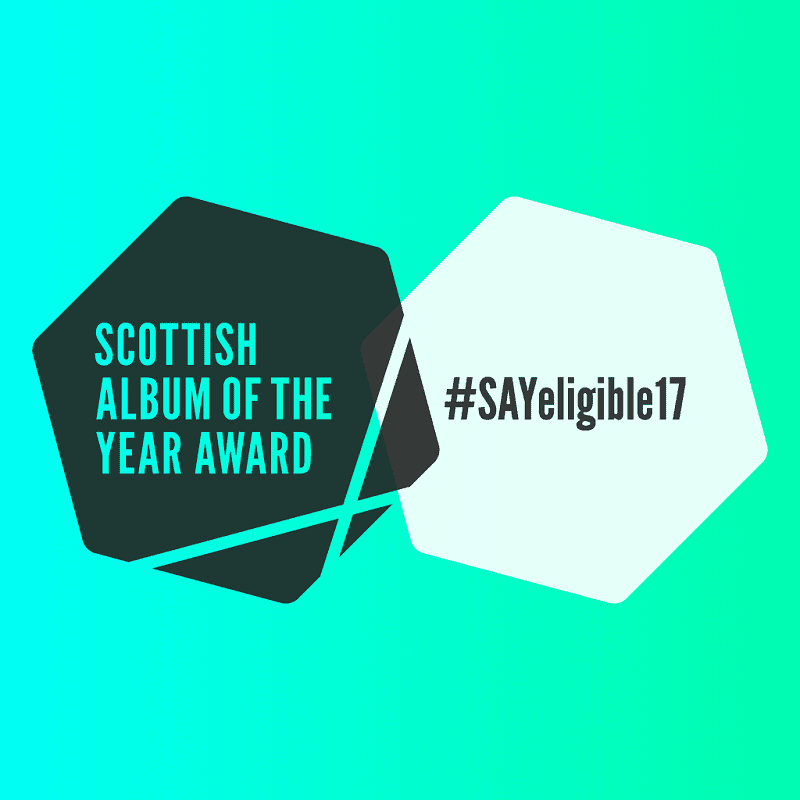 The 6th annual Scottish Album of the Year (SAY) Award has launched for 2017, encouraging artists, labels and the general public to nominate eligible albums released between 1 April 2016 and 31 March 2017 on The SAY Award website.

The SAY Award is a prestigious and exciting arts prize produced by the Scottish Music Industry Association (SMIA), with confirmed partners for 2017 including Paisley for UK City of Culture 2021, Creative Scotland, TicketWeb and PPL. The award celebrates, promotes and rewards the most outstanding Scottish albums released each year. Respected by artists and valued by the industry, The SAY Award is responsible for a surge in musical discovery and an explosion of impassioned debate on social media.

Once all eligible albums have been collated, 100 impartial ‘Nominators’, chosen from press, radio, music venues, jazz, classical, traditional folk, retail and elsewhere in the arts, will consider titles from The SAY Award’s Eligible Album List, nominating their five favourite albums and ranking them in order of preference. The 20 highest scoring albums will make up The SAY Award Longlist for 2017, announced on May 24th. The Longlist will be further whittled down to a shortlist of 10 albums, one of which will be chosen by the public during a 72-hour public vote (12-14 June) and the others decided by a panel of prestigious judges. The SAY Award 2017 Shortlist will be announced on June 15th as part of a BBC Quay Sessions show, with the award ceremony then taking place on June 28th in the surroundings of Paisley’s elegant Town Hall, in support of Paisley’s bid for Paisley to become UK City of Culture 2021. The winning artist will pick up a £20,000 cash prize, provided by long term Award partner Creative Scotland. The 9 runners up will each be awarded a £1,000 prize, as well as an exclusively designed piece of artwork from the SAY Award Design Commission.

Robert Kilpatrick, Projects and Operations Manager at the SMIA, said:

“The Scottish Music Industry Association (SMIA) is delighted to present The SAY (Scottish Album of the Year) Award 2017. Now in its sixth year, the impact of The SAY Award on an artist’s career is indisputable, while the anticipation and excitement around the campaign and award ceremony reflects the award’s growing cultural significance. We’re delighted to see Scotland’s pre-eminent arts prize launch for 2017, with the award placing a spotlight on the wealth of musical talent our country produces year after year.”

For the second year running, The SAY Award ceremony will be taking place in the historic town of Paisley, a place with a deep cultural heritage, not only in music but across the arts. Mark Macmillan, Renfrewshire Council Leader and Chair of the Paisley 2021 Partnership Board said:

“The SAY Award is one of the biggest dates in Scotland’s musical calendar and we are delighted to welcome it back to Paisley Town Hall for a second year.

“The town has a thriving music scene and is fast establishing itself as a key destination on Scotland’s major events map. To be able to attract and host an event of the importance of the SAY Award is a big boost for Paisley ahead of the town’s bid to be UK City of Culture 2021 being lodged.”

Alex Kapranos of FFS was shortlisted in 2016, and said: “It’s a real honour to be nominated for The SAY Award.”

“Scotland’s music excels in every genre, and there’s no better snapshot of our world-class talent than the list of nominees competing each year for the SAY Award. This is diversity in action: folk, hip hop, indie, rock, pop, electronica, classical, jazz… everything that makes up the vibrant Scottish scene has a voice here. The SAY Award is also a celebration of Scotland’s wider music industry, as work that’s released down a DIY route sits shoulder to shoulder with chart hits from the majors and the cream of Scotland’s home-based indie labels. It’s a great way to cheer on your personal favourites while discovering new music at the same time.”

“It has been a total honour and a privilege to be considered for The SAY Award. It’s been great getting to know the other albums and during these politically difficult times to see positivity, creativity and spirit coming out of the longlist and shortlist.”

To nominate an album, please visit The SAY Award website for guidelines and more information: http://www.sayaward.com/

Glasgow News? Daily Updates part of our network
Events at The Bungalow in March