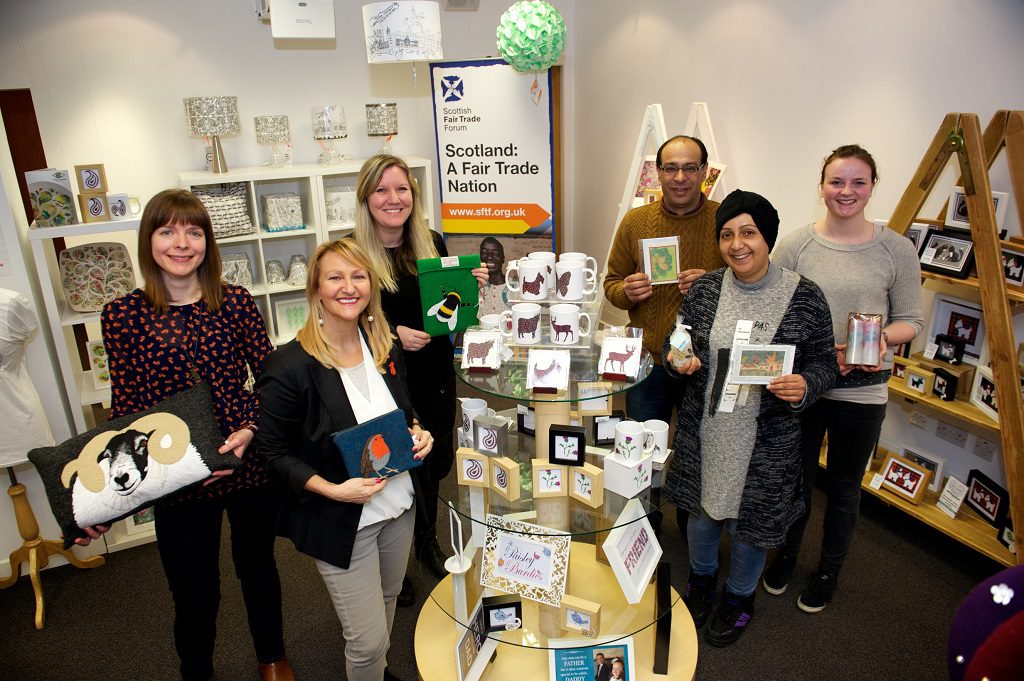 Fairtrade Fortnight arrived in Renfrewshire and saw schools, businesses and the local community come together to showcase the area’s support for the cause.

Renfrewshire hosted visits from producers from Peru and Palestine who gave an insight into their lives and a first-hand experience of how fair trade can have a positive effect on those who work under the practice.

Renfrewshire’s Fair Trade Steering Group, in partnership with the Scottish Fair Trade Forum, co-ordinated a visit from Lousi Albadawi who works with adult with special needs in Palestine to produce cards, jewellery, candles and other crafts.

Lousi visited Milldale Day Service in Linwood to complete a crafts workshop with adults with special needs from Renfrewshire where she passed on her experiences from her home country. She also then visited the InCube shop in Paisley which showcases local designers, makers and artists’ products.

Local fair trade organisation Rainbow Turtle hosted Yannina Meza who is part of the Manos Amigas organisation in Peru which works with artists across the country to create ceramics, jewellery and textiles.

She visited 15 schools across Renfrewshire to speak with pupils and educate them on how fair trade has helped her and her family.

Every primary and secondary school in Renfrewshire also received a ‘break pack’ which was provided by local fair trade organisation Just Trading Scotland and funded by the steering group.

The packs include jams, marmalades, tea, recipe cards and information sheets which will help schools engage children, show them different sides to fair trade and also help them create a stall at which they can sell their products- gaining an insight into what producers have to do to survive.

Councillor Jim Sharkey, Chair of the Renfrewshire Fairtrade Steering Group, said: “It’s been fantastic to see the community come together over the past fortnight to raise awareness of fair trade and the reasons why we should be supporting the cause.

“As a steering group we are committed to ensuring the next generation are aware of fair trade which is why we provided the ‘break packs’ to each school and also assisted Rainbow Turtle in having Yannina speak to children in our schools about why it is so important to those who grow our food or make our clothes.

“The Fortnight has shown there is real support for the cause in Renfrewshire and we are determined to ensure the members of the steering group can continue their outstanding work throughout the year.”

The theme of this year’s campaign, launched by the Fairtrade Foundation, was ‘Put Fair Trade in your break’ and focused on educating people on the fact that many farmers and workers who grow our food aren’t getting paid fairly.

Numerous coffee mornings were hosted across Renfrewshire, including in Paisley, Renfrew, Kilbarchan, Lochwinnoch, Bridge of Weir and Houston, which brought people together to learn about the message of fair trade and the reasons why it is so important.

Rainbow Turtle volunteers also hosted the Paisley Ironed Man event in the town centre and stripped to their underwear to raise awareness of unfair, exploitative practices in the clothing industry.

Councillor Sharkey added: “The challenge we face now is ensuring that Renfrewshire supports fair trade throughout the year and the steering group will work hard to make that a reality.

“We are always looking for interested people to join the local fair trade groups, and the wider steering group, so I would encourage anyone with interest to get in touch.”

More information can be found on the council website at www.renfrewshire.gov.uk/fairtrade

Anyone who wishes more information or to become a part of their local group can contact fairtrade@renfrewshire.gov.uk.