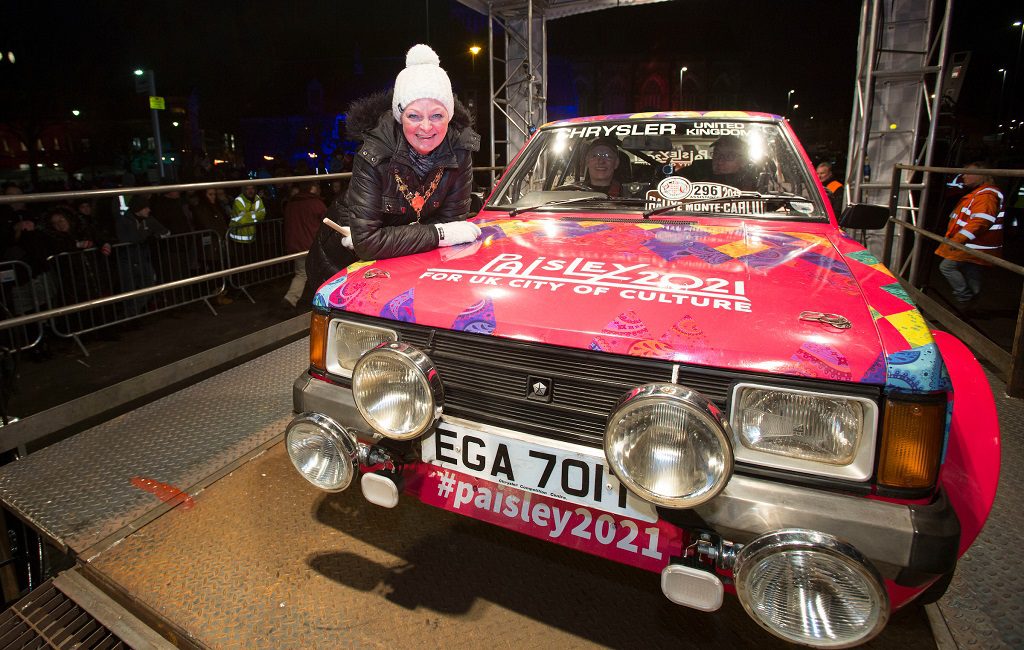 Paisley’s bid to be UK City of Culture 2021 was on show in the millionaire’s playground of Monte-Carlo – thanks to a local man who drove there as part of the city’s famous historic car rally.

Jim Meggat and his Paisley 2021-branded Chrysler Sunbeam undertook the grueling trek to the principality – where the rally is based – over an epic nine-day test of endurance and skill.

His was the first car over the ramp when the rally’s only UK start leg took place outside Paisley Abbey in front of a crowd of thousands on January 25.

He was joined by his friend and navigator Neville Breach for the 5,000-mile round trip, with the pair acting as a support car to rally competitors Ranald White and Karsten Brown in their Rover 2000.

And as Jim explained, the colourful car caught the attention of competitors from across Europe as he helped spread the word about Paisley’s UK City of Culture ambitions.

He said: “The Paisley car attracted a lot of interest – loads of the other competitors wanted to know what it was all about.

“We were posting updates on our progress online and we reached thousands on Facebook, from all over the UK.

“And we also managed to get some of the Paisley 2021 banners out in the parc ferme in Monte-Carlo itself – we spoke nicely to the security guards next to the ramp and got some up there!”

Jim is now safely back home and catching up on some sleep after tackling a harsh road regime to hit the tough times set down by rally organisers.

the Paisley 2021 car high up in the snowy Alps

As he explained: “The first two days through the UK are relatively easy. But then on day three from Calais it is continuous – we went for 42 hours without sleep from Calais to Monte Carlo.

“While some crews will have rotated, I was driving and Nev was navigating the whole way.

“On the way down a lot of the driving is through villages, so it isn’t high-speed stuff and it is of course all within speed limits.

“By the time we arrived I was quite dehydrated as we had run out of fluids – there isn’t a lot of room in the car and limited places to stop and pick stuff up.”

some of the other competitors with a Paisley 2021 banner

But their efforts were rewarded as Ranald and Karsten battled the odds to finish a highly respectable 169th place in the rally – the best of the UK starters by some distance.

Jim explained: “The rally starts properly on Day 5 with a series of 14 stages around the Alps. These run almost continuously for three and a half days, and on two of the stages run at night the roads are closed to public.

“There are a lot of torturous twisting roads and hairpin bends and it got pretty tricky as the road conditions were patchy – one minute all is fine and the next it is a sheet of ice.

“A lot of cars retired this year, on all stages. But Ranald and Karsten had a really good result as they were the highest placed of all entries starting from Paisley.

“While a lot of the competitors had full service back-up they only had us – and what was even more impressive was they did most of it on the same unstudded tyres they left Paisley on.”

The Monte Carlo Classic Rally was taking place in Paisley for the fourth time this year, as part of the push towards UK City of Culture status.