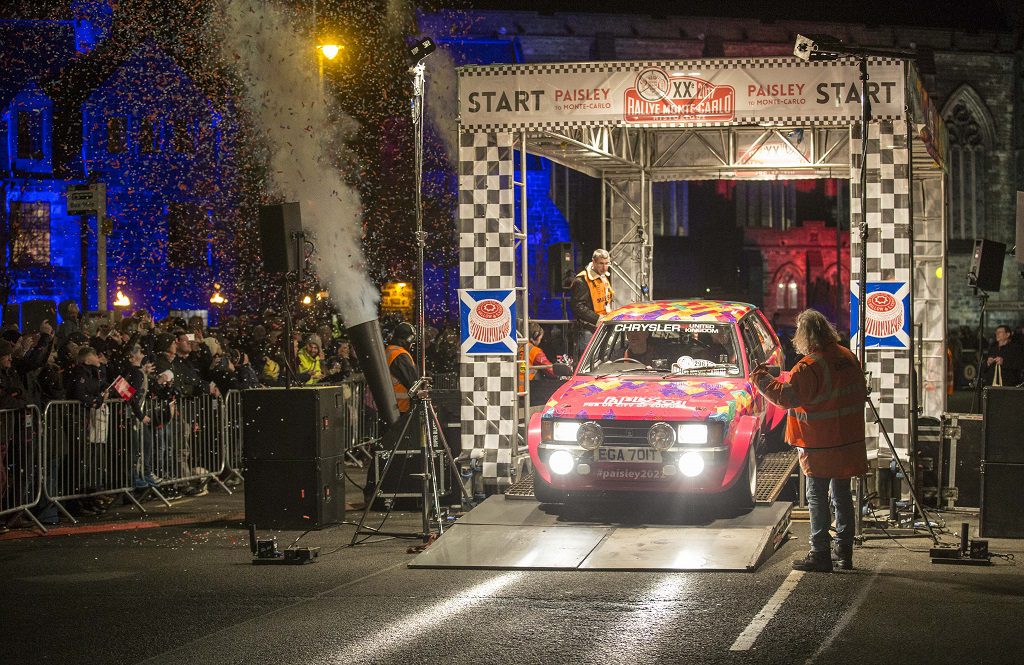 Thousands turned out in the centre of Paisley tonight to wave off classic cars from through the decades during the only UK start leg of the Monte Carlo Classic Rally.

Around 80 cars mingled with crowds in front of the striking backdrop of Paisley Abbey before heading over the start ramp greeted by pyrotechnics.

This was the fourth time the Renfrewshire town – bidding to be UK City of Culture 2021 – has hosted the event, one of the most glamorous in world motorsport.

Paisley was the only British start point for the race out of seven European cities including Stockholm, Lisbon and Barcelona.

Around 20 cars were setting off on the challenging 1,300-mile trek to Monte Carlo, with others taking part in a series of Monte heritage runs to various destinations around Scotland.

The event was being supported by Renfrewshire Council, who had laid on a programme of entertainment during the afternoon in the town centre.

The cars included a Paisley 2021-branded Sunbeam being driven by local man Jim Meggat, which is going all the way to Monte Carlo as a support car to the main rally – and people will be able to follow their progress via Paisley 2021’s social media channels.

Renfrewshire’s Provost Anne Hall flagged the cars off and said: “Once again, the people of Renfrewshire supported the Monte in their numbers and the presence of the cars made it such a colourful and lively atmosphere.

“For Paisley to be joining various European capitals in hosting a start leg of this prestigious event is really raising our profile ahead of the UK City of Culture 2021 bid going in later this year.

“Once again, it was a pleasure to be able to flag the cars off and I would like to wish all the best to the drivers setting off for France tonight.”

At the wheel of one of the cars, an MG Midget, which is the official opening car for the Scottish start, was Douglas Anderson, the UK co-ordinator and the man responsible for bringing the Monte back to Scotland again in 2011.

Douglas said: “This year’s Monte start had all the ingredients to make it a unique mid-winter festival which lifted the spirits of all the folk from Paisley and beyond who come along each year to enjoy the wonderful carnival atmosphere.”

Well prepared for a chilly drive south was Andrew Goodfellow from Dundee and co-driver, his brother-in-law Derek Coghill and their 1930 Austin 7 Ulster open-topped 2-seater sports which will – hopefully – complete the drive to Monte Carlo.

Said Andrew: “What a fantastic opportunity this is to take part in this historic event and we are both totally confident we and the car will make it all the way.”

Glasgow News? Daily Updates part of our network
The food you love delivered to your door