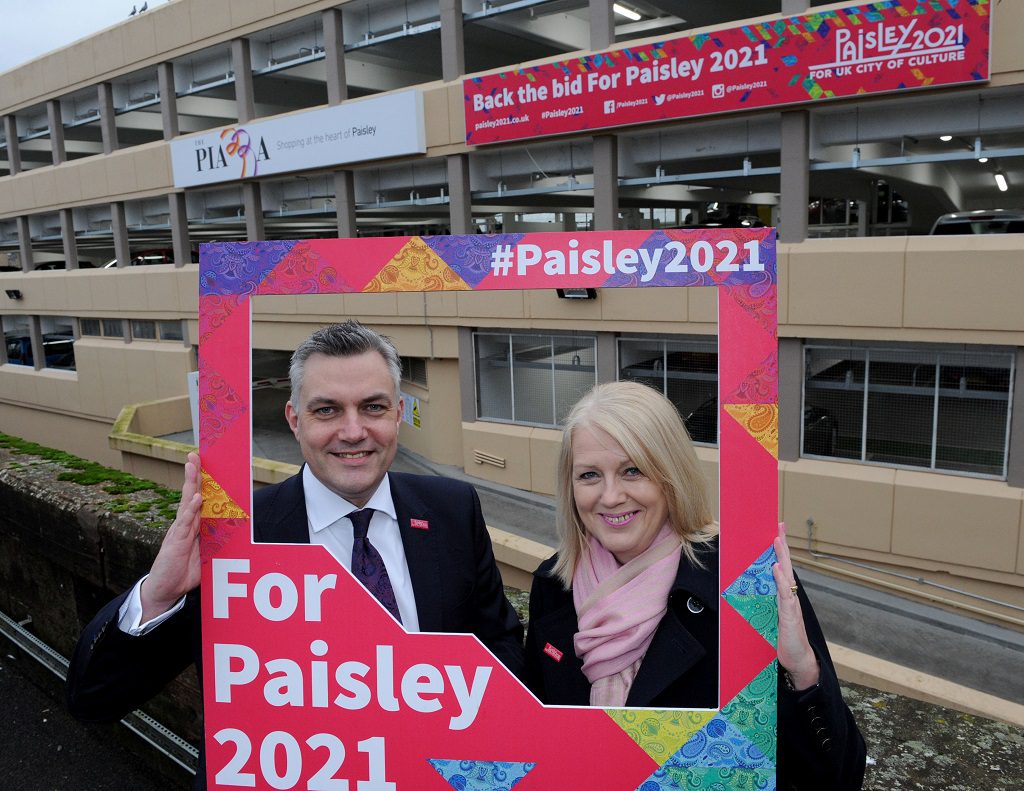 Paisley’s bid to be UK City of Culture will be seen by five million rail passengers this year – after bosses at the town’s Piazza shopping centre unveiled a giant Paisley 2021 sign.

The branding has just been installed on the side of the centre’s recently-revamped multi-story car park, which faces on to the platform at Paisley Gilmour Street station.

And it means passengers at the station – Scotland’s fourth-busiest – won’t be able to miss the giant advert for Paisley’s ambitions.

Maureen Hill and Cllr Macmillan on the platform at Paisley Gilmour Street, looking on to the sign

Councillor Mark Macmillan – chair of the Paisley 2021 partnership board – said: “We looked at various sites in the town and identified the Piazza car park as one being seen by huge numbers of people.

“A big part of the bid is about raising awareness of Paisley and changing perceptions of the town among potential visitors.

“This means the millions of passengers a year travelling between Glasgow, the airport, Ayrshire and Inverclyde will be aware of what is happening here.

“A successful bid will bring massive economic benefits to Paisley town centre and huge numbers of visitors spending their money with local businesses.

“When the bid goes in it will be crucial we can show the judges at DCMS there is support from throughout the local community.

“To date more than 100 local businesses have shown their support and I would like thank The Piazza for getting involved in this way.”

The Piazza multi-storey car park has a capacity of 336 spaces and recently had a £1.3m revamp, which saw external and internal improvements.

That included extra disabled and parent/child bays, work on the lighting and surfaces, repainting the outside of the building, and new lifts and CCTV.

Piazza manager Maureen Hill added: “We made a major investment in the new car park because we have confidence in what lies ahead for Paisley town centre.

“If Paisley was to be named UK City of Culture 2021 it would be a massive boost to ourselves and other town centre businesses in terms of footfall.

“We are delighted to show our support for the bid to the many millions who pass through the station each year.”

Glasgow News? Daily Updates part of our network
College Partnership with Elior UK Set to be a Recipe for Success!