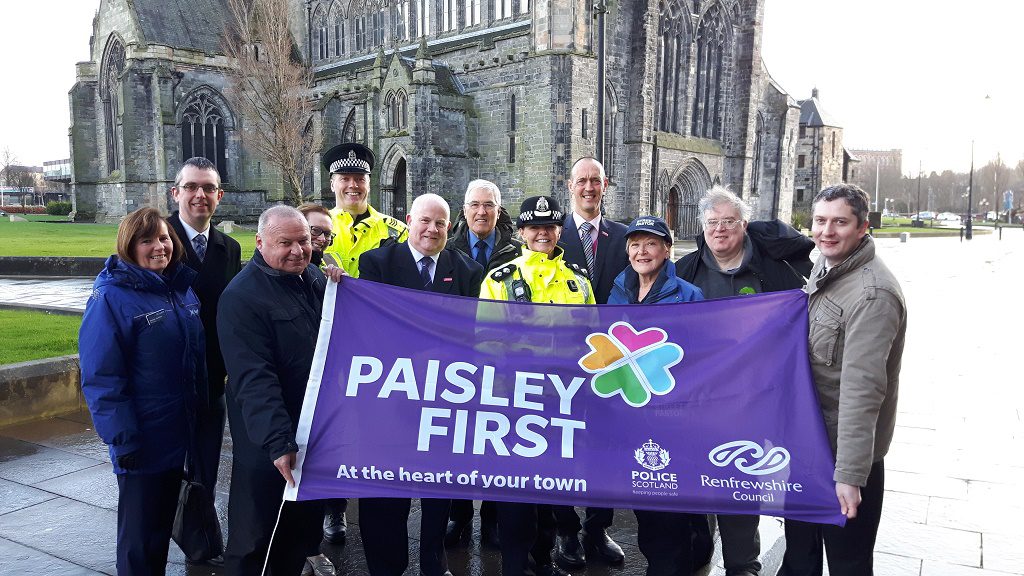 Paisley First is celebrating today after learning it achieved the prestigious Purple Flag status for its evening and night-time economy (ENTE).  Purple Flag is a town and city centre award – similar to the Blue Flag for beaches – which aims to raise the standard and broaden the appeal of town and city centres between the hours of 17:00 and 05:00. Areas awarded the Purple Flag are recognised for providing a vibrant and diverse mix of dining, entertainment and culture while promoting the safety and wellbeing of visitors and local residents.

Since 2007, the programme has awarded the Purple Flag status to over 65 towns and cities in the UK and Ireland. Purple Flag accredited areas have all reported a consistent increase in footfall and a decrease in crime within the ENTE. The Purple Flag programme is managed by the Association of Town and City Management (ATCM) which works in partnership with key stakeholder groups backed by the government, police and businesses, as well as UK sponsors, Diageo Great Britain. Paisley First Chairman, Ian Henderson stated, “Winning the Purple Flag is another project milestone for Paisley First and our partners, and it is a great credit to the team who have driven the project to completion.  Paisley is the third town in Scotland to achieve this accreditation, joining the latest towns, Aberdeen and Dunfermline.  Towns and cities that have been awarded Purple Flag status have reported increased sales and additional evening events and activities.  Paisley First are currently planning more events and projects for the year ahead and we will present these to our members at our open meeting on the 16th February, 2017 at the UWS.”

Councillor Eddie Devine, convener of Renfrewshire Council’s Environment Policy Board, said: “We are delighted the town is now only one of the few places in Scotland to be awarded Purple Flag status.  A number of council staff worked closely with Paisley First and other partners on the application and it is great to see that hard work paying off”.

“This award shows Paisley town centre has been judged as surpassing standards of excellence in managing the evening and night time economy, and offers an entertaining, diverse, safe and enjoyable night out.

“The work going on around the town’s bid to be UK City of Culture 2021 is geared towards selling Paisley as a destination and bringing in visitors to spend their money with local businesses.

“For potential visitors to know the town centre has been given an official seal of approval by expert assessors  is a great boost to that work – and with the bid due to be lodged in the next few months, this accolade couldn’t have come at a better time.”

Shanaaz Carroll, CEO of the ATCM said:  “There are now over 70 towns and cities across the UK and Ireland who are proudly flying the Purple Flag after working hard to gain accreditation. The award is not just about safety, but also the vibrancy and diversity of the evening and night-time offer — this can only be achieved by people working together and across the country, we are seeing some amazing examples of this type of partnership working.”

Paisley officially receives the Purple Flag new accreditation on the 8th February, 2017, along with Dublin One, Leeds, Limerick, Maynooth, Reading, Wexford and a further seven towns; Dunfermline, Leicester Square, Newcastle under Lyme, Preston, Salisbury, Sheffield and Southend who have had their Full Renewal status renewed.