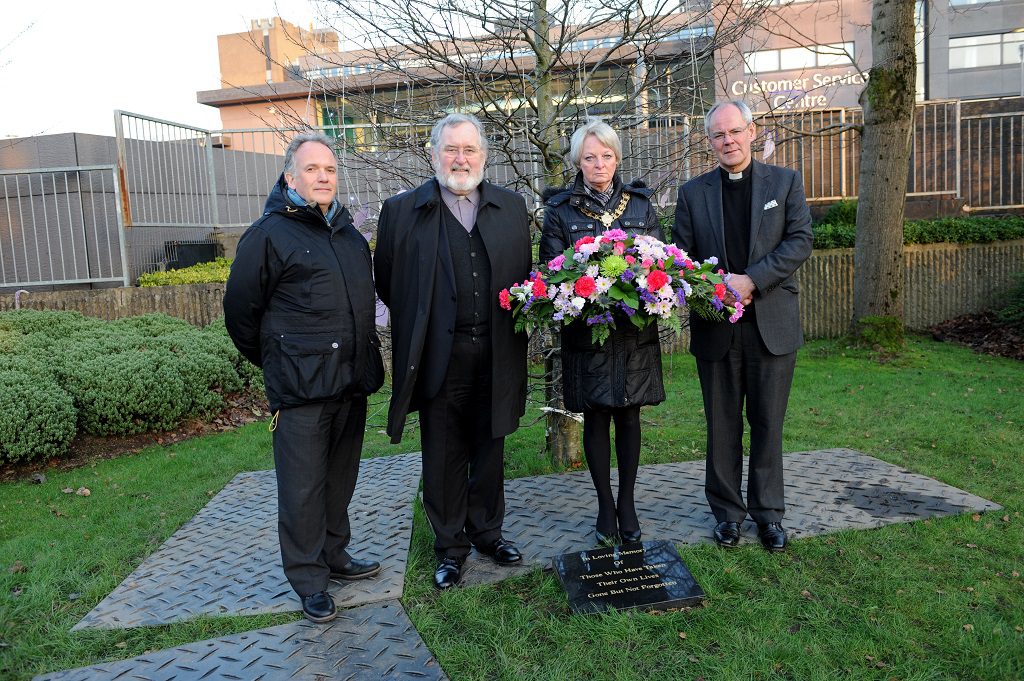 Those lost to suicide were commemorated in a special service held at Renfrewshire House yesterday (26 Jan).

Renfrewshire support group Survivors of Bereavement by Suicide (SOBS) hosted the annual service at the memorial tree which resides in the council grounds.

The service was attended by Renfrewshire’s Provost Anne Hall, Reverend Alan Birss and Deacon Jack Gallacher as well as members of the local community.

Reverend Birss and Deacon Gallacher led a short set of readings, followed by a procession to the memorial tree at which Provost Hall laid a wreath of remembrance.

Community members were then able to place a purple heart on the tree to commemorate the loved one they have lost.

A community member places a purple heart onto the tree

Following the service all those attending were invited to join the Provost, the local SOBS support group and the Choose Life team for light refreshments in Paisley Abbey.

Provost Hall said: “The memorial tree is an opportunity for those who have lost a loved one to remember them- whilst also providing a place for them to visit throughout the year.

“I encourage anyone who is having suicidal thoughts or has lost someone to suicide to seek the help that is available- such as the local SOBS group or the Choose Life team.

“Seeking help can make all the difference and it is important to know that you are not alone.”

Lisa Aitken, Choose Life Resource Worker, said: “The annual service has become crucial to the local community and it’s important that those who need it have this outlet.

“The local SOBS group provides a safe place for those who have been affected by suicide to find support from others who have faced similar heartbreak and can offer guidance to those who are feeling low.

“All are welcome to come along to our next meeting and become a part of the group.”

The local support group meets on the last Wednesday of the month, 7:00pm-8:30pm, at the Wynd Centre, Paisley and new members are always welcome.