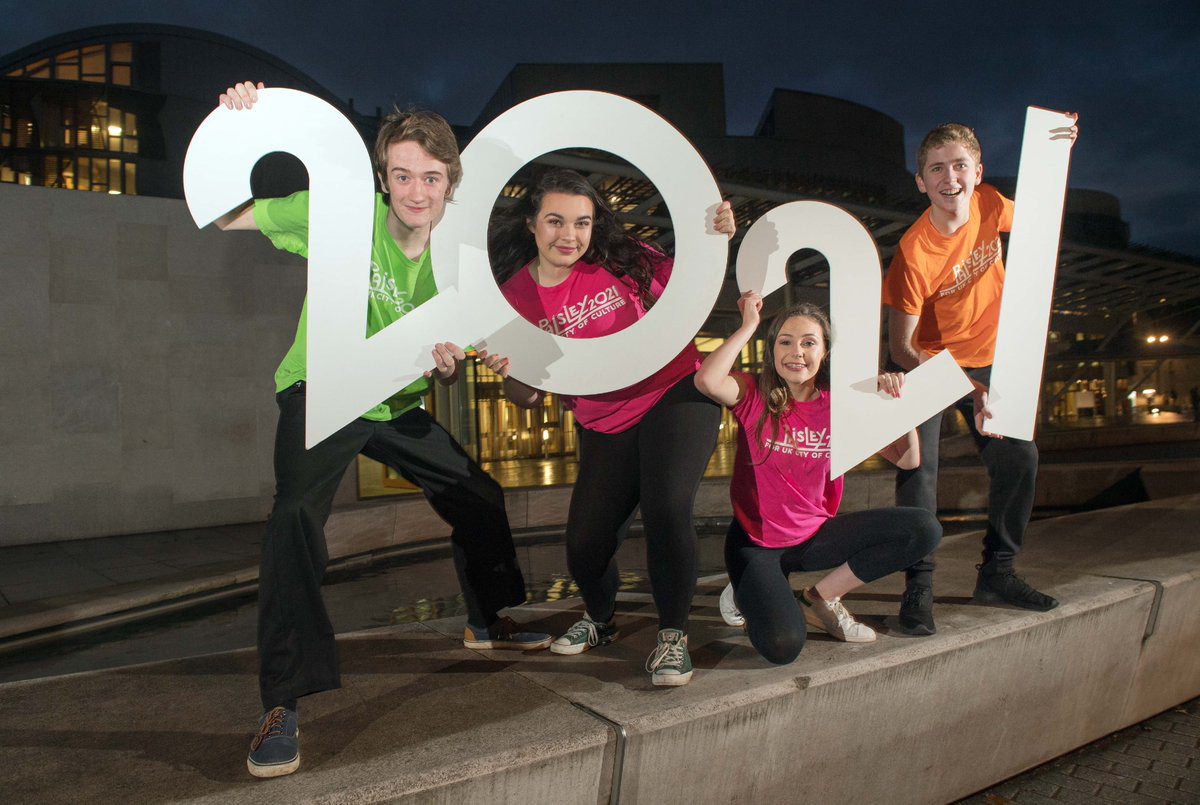 Artists, poets, actors and musicians from Paisley will join with representatives from the public, private and third sectors at the Scottish Parliament tonight to show their support for Paisley’s bid for UK City of Culture 2021. George Adam MSP for Paisley and Neil Bibby, MSP West Scotland, are sponsoring a reception for Paisley 2021, which has attracted attendance by Creative Scotland, the National Theatre of Scotland, VisitScotland, Skills Development Scotland, YoungScot and the British Council, to name but a few.

Paisley-born, renowned artist and script-writer, John Byrne, is also expected to attend, having recently said he supports the bid wholeheartedly. And MSPs of all parties will be invited to show their support in person and via social media. The event marks a critical point in Paisley’s journey towards submitting its bid for the title, run by the Department of Culture, Media and Sport (DCMS), next spring, and celebrates phenomenal support for the endeavour garnered over the past year.

Jean Cameron, Project Director for Paisley 2021, said, “In 12 short months, we have seen the tide of opinion turn towards a position where people now really believe we can do it, and that belief in itself has had an enormously positive effect on our communities.

“A vivid pattern is emerging – a bit like the famous Pattern itself – with passionate people all pulling together to create an incredible showcase that draws inspiration locally, but also thinks globally looking to partners across Scotland to help us throw the country’s doors open to colourful, dynamic, marvellous, friendly exploration!”

In the past year:

Paisley also has the largest following on social media of any of the known contenders including Perth, Coventry, Hereford, Sunderland and Stoke-on-Trent.

Renfrewshire Council Leader and Chair of the Paisley 2021 Bid Partnership Board, Mark Macmillan, added, “These past 12 months have taken us on an incredible journey, rediscovering assets that have for too long been overshadowed and engaging with local communities on an unprecedented scale. Tonight we are moving things up a gear and we are very grateful to George and Neil for affording us the opportunity.”

George Adam MSP, said, “It is an honour as Paisley’s MSP to host this event showcasing what Paisley has to offer and presenting the powerful case for Paisley to be the UK City of Culture in 2021.

“The interest that has been generated will mean this is one of the best attended events the parliament has ever seen. Indeed, the numbers are so high because so many of the talented individuals from in and around the town are attending.

“I’m sure this will go a long way in presenting Paisley’s bid to the world.”
Neil Bibby MSP, said, “I’m proud to co-host this important event in support of Paisley’s bid for UK City of Culture. Local people already know that we have an incredibly strong case to be the 2021 host, but it was fantastic to showcase the town’s Untold Story in the Scottish Parliament to MSPs, the Scottish Government and key stakeholders. It is very encouraging to see that more and more people are backing the bid.”

Meanwhile, Paisley’s events calendar is steadily growing in strength and popularity. On Saturday, December 3, it secured the Scots Trad Music Awards 2017 to add to the British Pipe Band Championships and Scottish Album of the Year Awards, which will both be returning in 2017. The town is also bidding to host The Royal National Mòd again in 2021.

A full list of next year’s events is at http://www.paisley2021.co.uk/news/major-events-programme-in-2017/

For more information on Paisley’s story go to www.paisley2021.co.uk You can support the bid by pressing the red button on the site, liking /Paisley 2021 on Facebook, or following @Paisley2021 on Twitter and Instagram.

Glasgow News? Daily Updates part of our network
Best Cities In The UK To Have An Office In