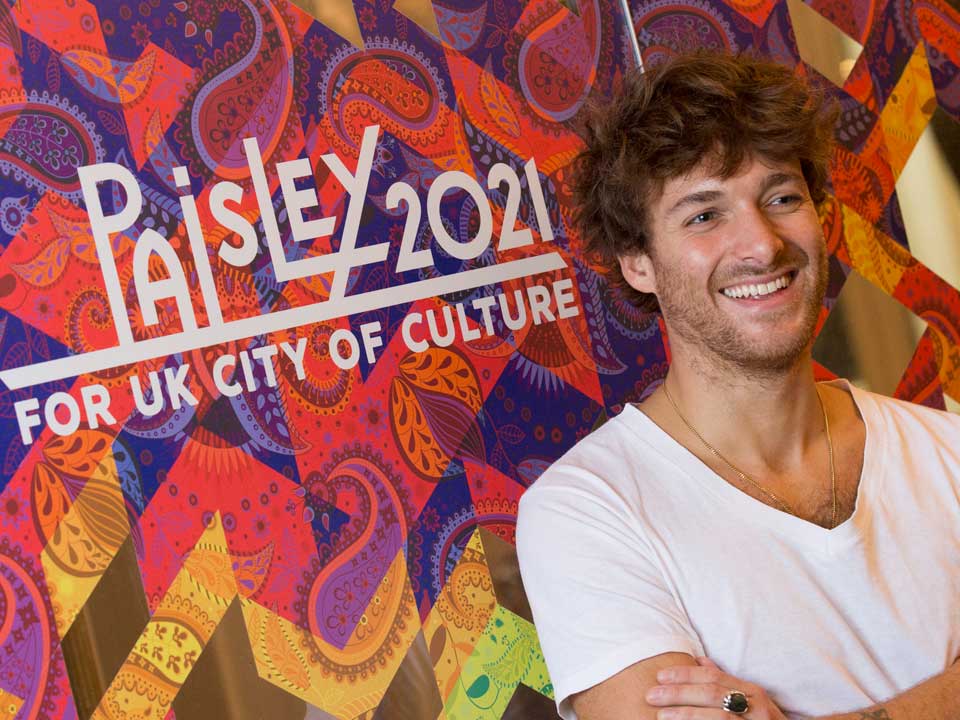 Paisley will be bringing in Scotland’s new year – with not one but three local acts taking the stage at the world-famous Edinburgh’s Hogmanay Street Party. The town’s very own music megastar, Paolo Nutini, will headline both the Night Afore Concert on 30 December and Concert in The Gardens on 31 December, with a local act – the hotly-tipped The Vegan Leather – supporting on both nights.

And Paisley indie-rockers Lemonhaze will open the showcase Concert in the Gardens after winning a nationwide competition to land a prized slot on the bill. The contest saw a shortlist of eight bands chosen from more than 400 entries by judges including festival headliner Paolo, with more than 10,000 votes cast by the public.

And the Paisley connection to Edinburgh’s Hogmanay doesn’t stop there – with the festival bill including a special show paying tribute to work of the town’s 19th-century weaver-poet Robert Tannahill.

Acclaimed singer-songwriters Eddi Reader and James Grant will be joined by the Tannahill Weavers and Tannahill Singers for a show based on the work of ‘Scotland’s secret bard’, as part of Scot:Lands which takes place in various venues around the Old Town on 1 January.

The show is arriving in Edinburgh after making a sold-out debut at Paisley’s Spree festival in October.

Gianluca Bernacchi of The Vegan Leather said: “This will be the biggest gig we have done so far – we are all really excited for it, and to be playing with Paolo.

“We were growing up in Paisley when he first broke through and he is someone we really look up to, so it’s really cool to be on the same bill as him.

“My family are actually from the same town in Italy as his family, so we have met a few times through our parents.

“Edinburgh’s Hogmanay is one of the biggest parties in the world and to have so many Paisley acts performing speaks volumes about what is going on in the town.”

Jean Cameron, Project Director of Paisley’s bid for UK City of Culture 2021, said: “Scotland boasts one of the most iconic new year celebrations in the world with Edinburgh’s Hogmanay – and to have three Paisley acts at the heart of that just shows the strength of the wonderful creative scene we have in the town.

“The Vegan Leather and Lemonhaze are two of our best up-and-coming acts, so it is great to see them share a stage with our best-known musical performer.

“It’s also great to see the work of Paisley’s Robert Tannahill being brought to life as part of the Edinburgh’s Hogmanay festival.

“This helps showcase the depth of Paisley’s historic and contemporary creative offer – and with the bid to be lodged in 2017 it couldn’t have come at a better time.”

The Vegan Leather and Lemonhaze have both already played to crowds of thousands during major events in Paisley town centre – with the former on the bill for the town’s Christmas Lights Switch-on and Paisley 2021 bid anniversary last month.

He said at the time: “Paisley has this real air of bohemia and is full of artists and free-thinkers, and for me it’s got to embrace that and not try to change that.

“I see the romance in the town – I see the real beauty in it.”

Also appearing for the Concert in the Gardens are 90s icons the Lightning Seeds, with 75,000 revellers expected to descend on Edinburgh for 31st December, 150,000 for the full three-day Edinburgh’s Hogmanay programme. Full details of all the Edinburgh’s Hogmanay events and tickets still available can be found at www.edinburghshogmanay.com