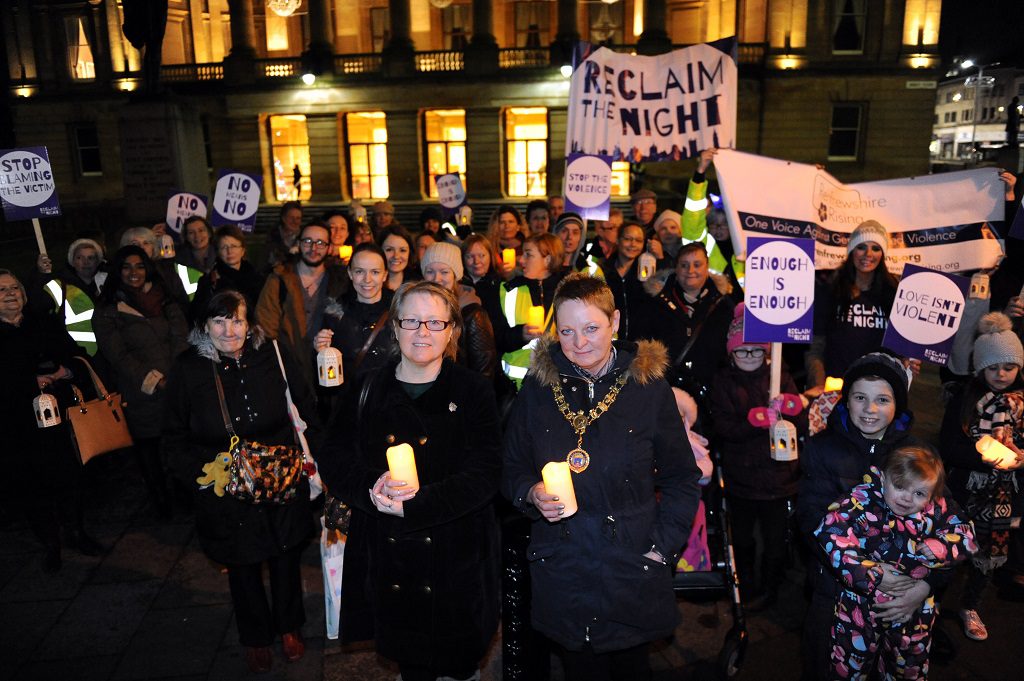 Campaigners are set to descend on Paisley to take part in a march which calls for the elimination of violence towards women. Campaigners at the 2015 march

The Reclaim the Night march will begin at 6:30pm on Tuesday 29 November- starting outside the main entrance to the University of the West of Scotland, down the length of Paisley High Street into Dunn Square.

Volunteers are invited to take part in the candle-lit march and show their support for women’s right to be free of violence and abuse in their home and their community. The procession is part of the wider international 16 Days of Action campaign- which takes place from 25 November to 10 December each year and aims to raise awareness of the issue on a global level.

The theme in Renfrewshire this year is ‘Not Just A Women’s Issue’ and men are encouraged to join the action and show their support by wearing a white ribbon.

Tony Lawler will lead the group using the Charleston Drum and will be followed by women’s groups, supporters and campaigners to bring attention to the cause in Renfrewshire.

Renfrewshire’s Provost Anne Hall will lay a remembrance wreath in Dunn Square followed by a two minutes silence to remember those lost to domestic violence.

The march will then continue on to Paisley Abbey where White Ribbon Scotland will close the proceedings and the Renfrewshire Rising choir will perform- led by Gordon Rigby, formally of the BBC and Scottish Philharmonic Orchestra.

Teas and coffees will then be provided as will a chance for discussion of the issue between like-minded people.

Councillor Iain McMillan, Convener of Renfrewshire Council’s Social Work, Health and Wellbeing Policy Board, said: “This march brings the issue to the forefront of people’s minds as our residents- male or female- should not be afraid to venture out into the community at night.

“We are working hard to promote Paisley, and Renfrewshire, as a safe place to be- and we are succeeding- but events such as this march allow the message to be substantiated.

“I would encourage the Renfrewshire community to come together again this year and show their support for this worthwhile cause.”

You do not have to sign up to this event and all are encouraged to gather at the UWS entrance for 6pm.

Glasgow News? Daily Updates part of our network
MP calls for Chancellor to suspend ESA changes in the Autumn Statement