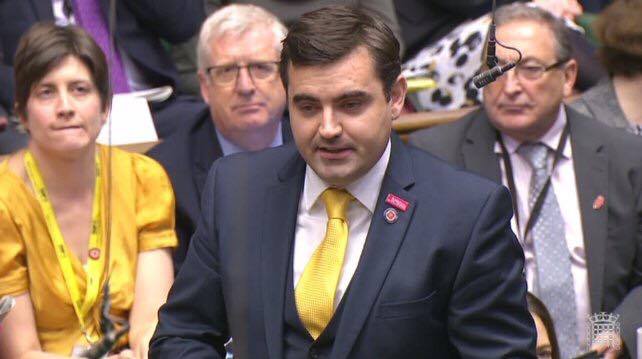 Gavin Newlands, MP for Paisley and Renfrewshire North, has urged the Prime Minister to use the closure of Dungavel as an opportunity to rethink her approach to immigration detention. The UK Government is planning on closing Dungavel Detention Centre and replace it with a short-term detention facility near Glasgow Airport.

During Prime Minister’s Questions, Mr Newlands said that the UK Government’s indefinite detention policy was a stain on the country’s human rights record and that Renfrewshire is united in opposition to the inhumane and ineffective practices that have been allowed to take place at the various detention centres throughout the UK.

“The UK is the only country in Europe which allows the indefinite detention of some of the most vulnerable people in society.

“This shameful record on immigration detention – which has also allowed pregnant women to be detained in prison-like environments – is a damning indictment on this government.

“With plans to close Dungavel and replace it with a short-term holding facility near Glasgow Airport, people in Renfrewshire are united – we will not tolerate these practices being allowed to take place in our local community.

“This new short-term holding facility could mean that detainees will be moved to longer-term detentions facilities which are hundreds of miles away from their friends, families and legal advisors.

“The Prime Minister should use the proposed closure of Dungavel as an opportunity to rethink her detention policy and end this stain on our human rights record.”