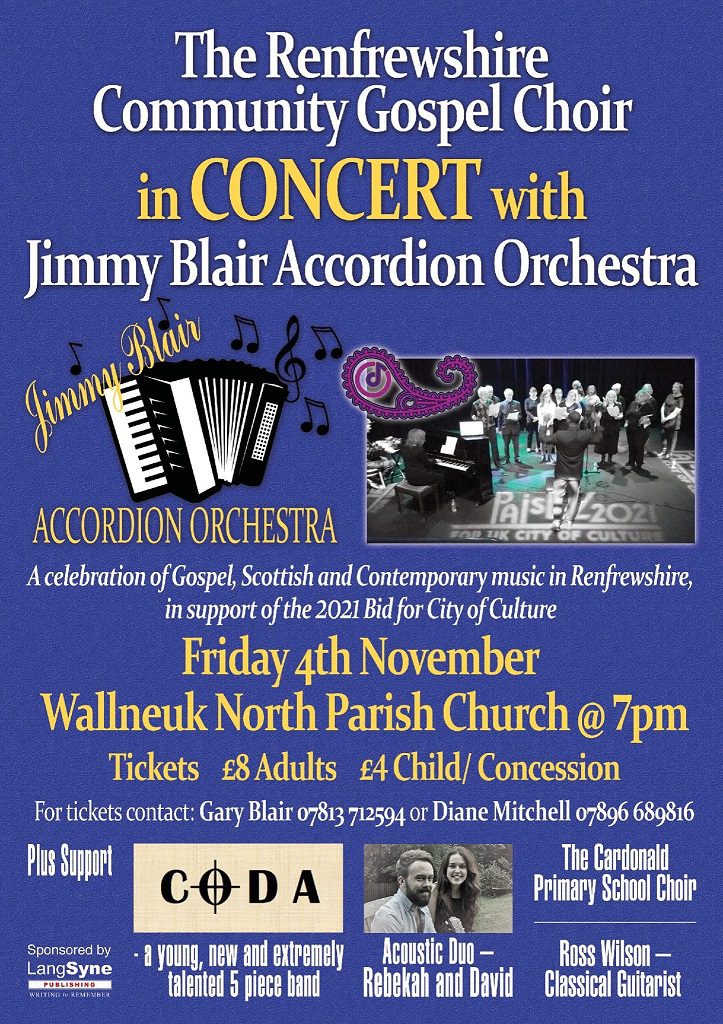 ENJOY a night celebrating Gospel, Scottish and Contemporary music in Renfrewshire in support of the Paisley 2021 Bid for the City of Culture. On Friday 4 November The Renfrewshire Community Gospel Choir will be in concert with the Jimmy Blair Accordion Orchestra for what promises to be a lively evening appreciating many talented musicians in the area.

Renfrewshire is home to a wealth of musical talent and the Cultural Bid offers the chance for members of the community to showcase their talent.

Taking place at Wallneuk North Parish Church at 7pm, the talented performers will be bringing their soulful, upbeat sounds to the stage.

The Renfrewshire Community Gospel Choir is the first choir of its kind in Renfrewshire, inclusive to all with no auditions required. Aimed at people who enjoy singing, they welcome people to come along, whether it’s for fun, to meet new friends or to improve their vocal skills.

The choir was formed by Diane Mitchell, who had previous involvement with school choirs and singing in choirs herself. After the launch of her music school last year, she decided to approach the Association of African Communities in Paisley.

As a result, a partnership was formed and both Diane and the African Communities are enthusiastic in their desire to support the Paisley 2021 Bid for the City of Culture. They hope that the choir will play a big part in the community in the lead up and the concert is just one example of this.

Joining the choir for the concert will be the Jimmy Blair Accordion Orchestra, conducted and led by world famous and internationally renowned accordionist Gary Blair, whose father Jimmy Blair founded the original orchestra in the 1970’s.

As former British champions, they also boast past and present members who are Scottish and British Champions.

In what promises to be a lively night for all the family, also gracing the stage on November 4 will be Coda, a young, new, vibrant and extremely talented five piece band.

Acoustic duo, Rebekah and David, will be bringing their contemporary, up beat sounds and classical guitarist Ross Wilson will be performing.

Flying the flag for the younger performers, The Cardonald Primary School Choir will also be taking to the stage. The night willed with grand finale with both choirs, the accordio.

There will also be a number of tickets kept aside to purchase at the door.