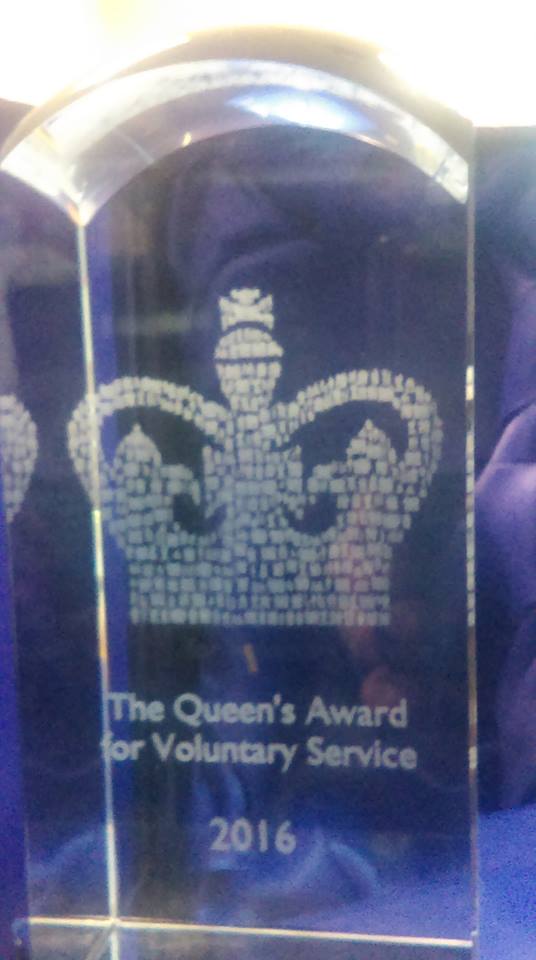 The Queen’s Award for Voluntary Services was presented to The Wynd Centre by Her Majesty’s Lord Lieutenant for Renfrewshire, Mr Guy Clark, on 5 October 2016. The Wynd Centre which is based in School Wynd, Paisley, operates a donation –based Counselling Service and provides accommodation for a wide range of other voluntary groups and charities.

The Queen’s Award for Voluntary Service is the highest award given to local volunteer groups across the UK to recognise outstanding work in their communities. The awards were created in 2002 to celebrate the Queen’s Golden Jubilee and winners are announced each year on 2 June – the anniversary of the Queen’s Coronation. Almost one hundred Wynd Centre volunteers, both past and present, joined a number of invited guests to see the Lord Lieutenant present a framed certificate and domed crystal to the Centre’s Chairman, Graeme McGowan.

The citation, which was read by Deputy Lieutenant Norman Walker at the presentation, paid tribute to the commitment and enthusiasm of the volunteers. The citation went on to state that “With a highly recognised counselling service at its heart, the Wynd Centre has become indispensable in providing an accessible resource and a lifeline for many vulnerable individuals from every section of the community.”

“This is a tremendous achievement for The Wynd Centre and is testament to the invaluable work which we have been carrying out in our community for over thirty years.

This is all thanks to our team of volunteers, both now and in the past, and I sincerely thank them for their contribution to the work of The Wynd Centre.”

Glasgow News? Daily Updates part of our network
Relevant Facts with Loans for Bad Credit in the UK